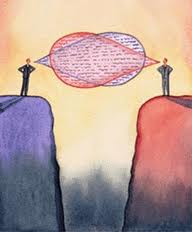 When debating with some believers the other day, I encountered a rather common claim. The context was a conversation regarding end-times in which some nonsense was being spouted about the Antichrist. I was rather astonished to find that the “proof” on the table consisted of the symbols on the US dollar. I asked the direct question, “Why do you believe this stuff?”, and was rather surprised to find that nobody wished to answer at first. When I pressed for a rational answer, I was advised that nobody really knows what rationality means.

As an aside, the fact that they were unable to even define rationality is perhaps the best answer I got, and explains a lot.

Eventually one chap chipped in and proceeded to recite some details. Scripture X says bla, and this means yada-yada (I’ll not bore you with the details). I carefully explained that the texts he quoted were vague and could be applied at any point in history to almost any historical regime. In fact, if pressed, I suggested he would find it very challenging to identify a regime it did not apply to.

Then came the punchline … I was accused of generalizing. To criticize, I would first need to study a 300 page doorstop of detailed nonsense.

Sigh! … really? I’m supposed to have a sufficiently rich understanding of the illogical positions I’m criticizing?

So how valid is this “you just don’t understand” card?

Key point: It is nonsense to claim that the views of someone who is most immersed in or knows most about a religion always trump those of a relatively uninformed outsider. Obviously people who live and breathe a belief know more about it than those who do not – but this quantitative advantage does not guarantee better qualitative judgements. If it did, by the same logic, we should take the word of the earnest astrologer of 40 years’ standing over the clear evidence that it’s all gibberish. Indeed, being deeply immersed may be a positive disadvantage, in that it might make it impossible to take a clear-sighted, impartial view. So, no we are not obliged to become experts in theology in order to make criticisms of religion.

OK, back to the “you just don’t understand” card; lets ask ourselves if it can ever be played. Suppose we did go to the other extreme and argue from a position of complete ignorance. [Silly example: Criticize Catholicism because Moses did not die for us on the Cross for our sins]. When faced with this, it should be possible for the religious to point out any elementary mistakes the critic has made, and so it  is not reasonable to initially fob someone off on the basis that they do not understand, instead just explain, but make it understandable.

This is a sword that cuts both ways. For example, if  faced with the “Evolution is a myth” claim, I will initially explain the misunderstanding, but if they then persist and choose the ignore the factual evidence, then perhaps it is time to suggest that a bit of basic reading might assist.

When challenged to go read the 300 page self-published book that would enable me to become an expert in some belief regarding end-time prophesies … do I really need to do that? Nope, of course not. the belief here is that prophesy works, so all I need to do is to ask them for one single example to establish that reality. The vague poetical stuff that can be retro fitted to almost anything is not credible, and once you discard that, you are left with exactly zero credible examples.

Note to believers: Yes, I’m aware of the Old testament prophesies regarding Jesus, but so were the New Testament writers, hence they wrote fiction to make it all fit. Outside the gospels (that all conflict) there is no historical evidence to verify any facts. In Matthew, writing for a Jewish audience, we discover that Mary and Joseph lived in Bethlehem in their own house… no census, no stable, no inn, no shepherds. Luke, writing about a prophet, writes a different story about Mary and Joseph living in Nazareth and travelling to Bethlehem for a census that never actually happened … no astrologers visiting, and no flight to Egypt. So which is more credible and reasonable … an amazing supernatural event, or religious fiction written at least 60 years after the actual events and was engineered to fit prophesies?

2 thoughts on “Claim: “You can’t criticize my belief, you know nothing about it””