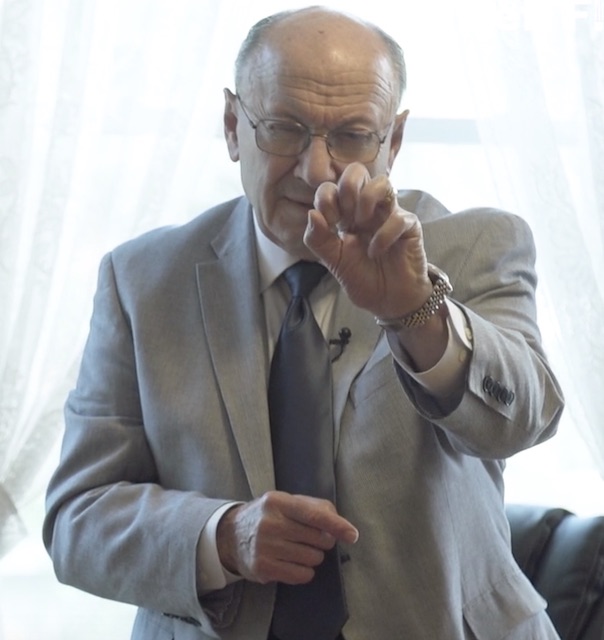 Yefim Shubentsov, also known as “The Mad Russian” claims that he can erase your addictions. He specifically attempts to cure smokers, alcoholics, drug addicts, and overeaters. Based in Boston and operating since about 1979, he claims to have “cured” 167,000 people.

Many say he is a miracle worker and that he successfully cured them. Often some will slam critics such as myself with comments like this – “Well if it works why criticise him?“.

The answer is that he does not actually cure anybody at all, it’s a con.

Why are you writing about him now, this guy has been around for decades?

NBC just did another uncritical clip on him (Nov 12th) that in effect acts as free advertising, hence he merits a bit of attention.

What exactly does he do?

He does not medicate, nor does he even touch those that come to him. Instead he simply waves his hands about and then tells them they are cured … and that will be $85 please. That’s it, that is the full extent of it.

When asked what is going on, he explains that he is an energy healer and that what he is doing is manipulating bio-energy.

“But it worked, and nothing else did“, say some of those that go see him exclaim. Often the media stories are gushing and uncritical. They simply accept what is being claimed and declare it to be a mystery.

What do we actually know?

He has no website, and does not advertise. Instead he promotes via word of mouth.

We don’t know how many people have gone to see him. He claims 167,000, but we don’t actually know that, we have no way of verifying that number. If he saw 5 patients a day, every single day of the year, for the last 40 years it is not even half that number. If however he “cures” large gatherings two or three times a day then the number might be in the right ball park. As for actually “cured 167,000” … er … no.

Of those that do go to see him, we simply do not know how many feel that it worked. Often positive testimonies are self-selective. People try, it fails, so they walk away and try something else. Others try with success and they pop up to say how magical he is.

There is no such thing as bio-energy. To quote the Wikipedia article on the topic of Energy healing …

While early reviews of the scientific literature on energy healing were equivocal and recommended further research,[10][5] more recent reviews have concluded that there is no evidence supporting clinical efficiency.[11][12][13][14][15] The theoretical basis of healing has been criticised as implausible,[16][17][18][19] research and reviews supportive of energy medicine have been faulted for containing methodological flaws[20][21][22] and selection bias,[20][21] and positive therapeutic results have been dismissed as resulting from known psychological mechanisms.[20][21]

That last bit is the secret sauce here. There are good psychological reasons for what he is doing to have a psychological impact …

A review of efficacy claims in energy psychology.

The small successes seen in these therapies are potentially attributable to well-known cognitive and behavioral techniques that are included with the energy manipulation.

If you travelled a long way to see him and also invested $85, then you are immediately motivated to believe it really worked.

Does he get negative reviews from his patients?

Oh yes, very much so. On yelp some are positive and some are way more than just “not positive”. Here are a few samples of his critics …

Do not give your money to this man!  Threatened me.  Was extremely rude to my mother and me.  We both left in tears.  Complete scam.  Does not hypnotize. Just uses the power of suggestion.  Rambled for two hours in which no one could understand his thick accent, while making hand motions to get rid of peoples pain.  Individually has you close your eyes and envision the words “I am smoking”, and raise your hand.  He makes a whoosh noise and whooshes away your vices, depression and anxiety.
Left and went back after smoking on the way to the train.  After talking to the receptionist, realized that I was supposed to envision the words “I am smoking”.  Not envision yourself smoking.  Went in to talk to Yefim, who became irate and yelled at me that I just don’t care about anything, I am going to die.  That he wanted to strangle me, throw me out the window.  That if I was his daughter, he would shoot me then shoot himself.  Yeah.  Real nice guy, I was completely shocked.  He then stormed out to the front desk, giving us our money back.
Obviously left feeling terrible wanting to smoke more than before.  At least we got our money back, but would pay to not have had such a terrible experience.
There is no magic cure, at least not from this weasel.  You have to want it, put in work and quit for yourself.

He lies. I went with a group of co workers in 1990. All of us still smoked!! No one bothered to go back for another visit. It is a waste of $. He doesn’t follow up with ANYONE so he has no idea what the success rate is. My group was 6 people from work.
I’ve spoken to others who also went thete and they continued to smoke ..also no follow up with the “Dr” so it is not a great success rate. The only ones it seemed to work for ate the few who leave comments.

Yefim is a complete crock! Everyone in my group was almost laughing at what a joke the whole thing was! He “puffed” our depression and thoughts of smoking away…. says he has “energy”. I mean, telling people to get off their meds but then tell them you’re not telling them to get off their meds but tell them they don’t need them is really dangerous for suggestibles: “It doesn’t solve your problems”. I wouldn’t recommend this to my worst enemy. A complete waste of $85.

I read all the reviews here first before posting this. Like others have said I had a very hard time trying to understand the mad Russian to the point that I was getting a headache from concentrating so hard on what he was jabbering. I did get the lecture that doctors are killing the youth of America with A.D.D. Diagnosis and drug treatments for same. I didn’t care I there to quit smoking. Thirty five minutes into this I figured I wasted $75 and $4 to park but I hung in hoping the one on one would be the cure. Not so. Same thing, couldn’t understand a damn thing he was saying and it lasted 20 seconds at best. No miricle cure for me.

I highly don’t recommend this person as an aid to quitting any addiction. His shtick: sweet older man, thick Russian accent, who talks very, very fast. Most of us didn’t understand 95% of what he said and there were close to 30 people in one room for 1 hour followed by less than one minute on each individual – one on one. This was a very disappointing and silly experience. There were some very desperate people in this room who had probably tried everything to quit smoking, drinking or drugs… I feel Mr. Shubentsov continues to take advantage of distressed people who have tried everything to help themselves and feels he is their last and only hope. In a nutshell: 30 people @ $75 ea times 3 sessions in one day = $6,750 US CASH. When somebody tells you he’s not doing it for the money… you know he’s doing it for the money. I traveled from Toronto to Boston. I feel like a fool.

This is basically pseudo-scientific nonsense and at its core consists of psychological manipulation.