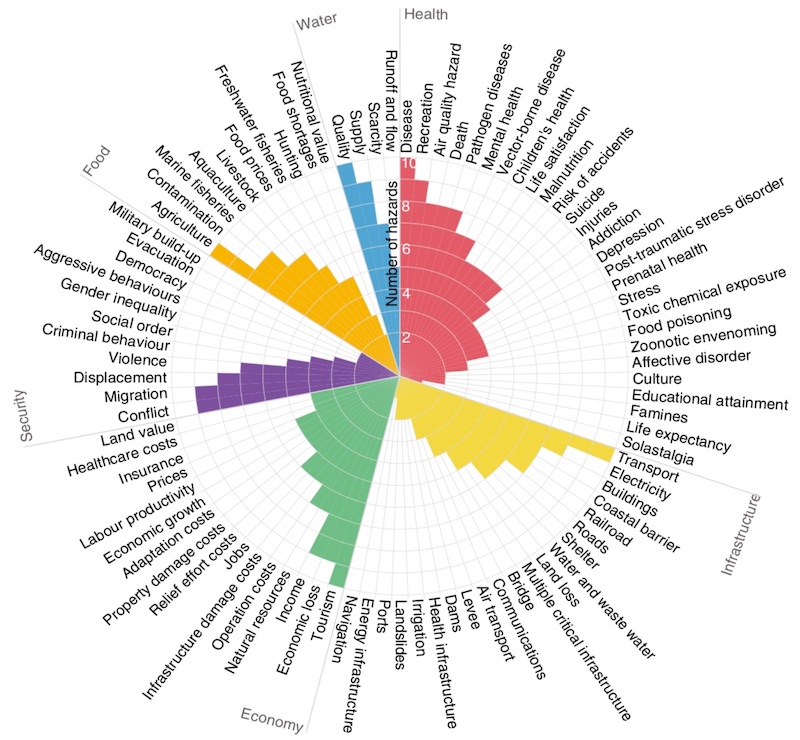 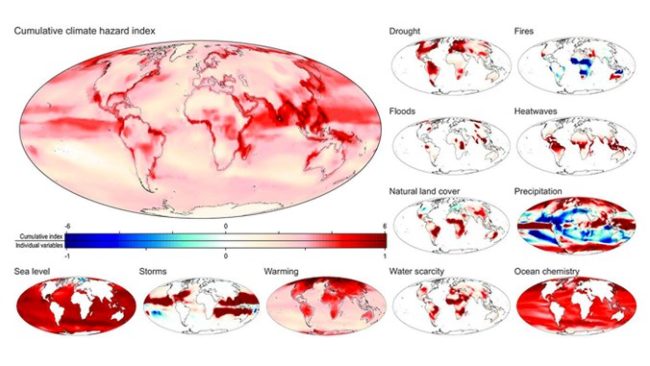 Researchers at the University of Hawaii have published a new study within Nature that examines the changes we face due to the ongoing uptick in the levels of Greenhouse gas.

It specifically examines how we will be impacted by the simultaneous occurrence of multiple climate hazards strengthened by increasing greenhouse gas emissions. This research reveals that we face a much larger threat from climate change than previous studies have suggested.

What exactly did this study do?

The question of human impacts relates to how climate change will affect our health, food, water, infrastructure, economy and security.

Land cover change as an impact?

Well yes, they also categorise changes in natural land cover as a hazard because ecosystems are an intrinsic component of Earth’s climate system as they are both sources and sinks of carbon. That it turn triggers other hazards (for example, warming and precipitation).

The key point is that while individual studies look at distinct outcomes, what actually happens triggers other outcomes.

We know that greenhouse gas emissions increase atmospheric temperature. That however is not an isolated outcome. The increase in temperature will enhance soil water evaporation resulting in drought, wildfires and heat waves in normally dry places, or massive rain and floods in commonly wet areas. In the oceans, warmer waters also evaporate faster, increasing wind speeds and the downpours of hurricanes, whose surges can be aggravated by sea level rise. As a result, greenhouse gas emissions can aggravate simultaneously multiple climate hazards.

In other words, we don’t just face the potential of one hazard, but multiple simultaneous hazards.

What conclusion does the study have?

“Greenhouse gas emissions pose a broad threat to humanity by simultaneously intensifying many hazards that have proven harmful in the past,” said lead author Camilo Mora, associate professor of geography in UH Mānoa’s College of Social Sciences. “Further, we predict that, by 2100, the number of hazards occurring concurrently will increase, making it even more difficult for people to cope.”

In the year 2100, for instance, New York is projected to face up to four climate hazards, if greenhouse gas emissions are not mitigated, including sea level rise and extreme precipitation. That same year, Sydney and Los Angeles will face three concurrent climate hazards, Mexico City will face four, and the Atlantic coast of Brazil will face five. Even under strong mitigation scenarios, increasing cumulative exposure to the multitude of climate hazards will impact rich and poor countries alike and especially in tropical coastal areas.

They have also rendered the data they gathered using a web based tool.

This web-application allows users to see the cumulative number of climate hazards likely to occur anywhere on Earth, under different emissions scenarios through 2100.

“The study is a compelling review of how climate change is literally redrawing lines on the map, clearly showing the threats that our world faces at every level,” said Dawn Wright, ESRI Chief Scientist. “The maps and data hammer home how much danger humanity truly faces, and the need for immediate action.”

The study itself also contains the following graphical summary. 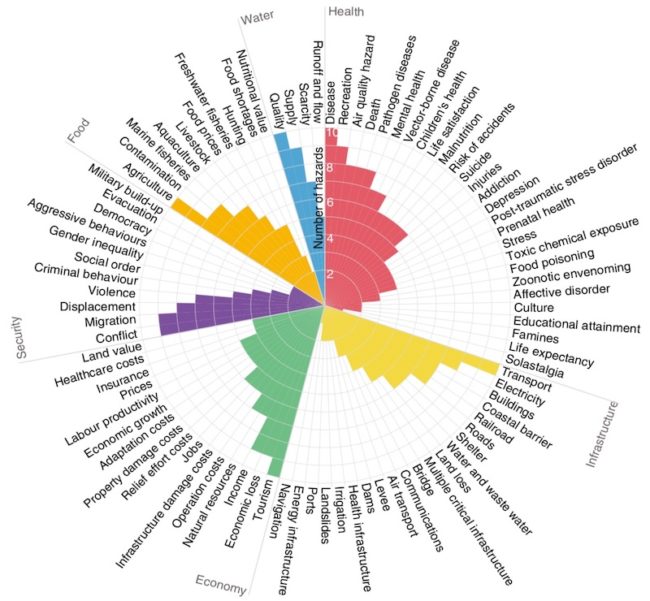 In the above they illustrate six different aspects of human systems (health, food, water, infrastructure, economy and security), with their subcategories for which impacts were observed. The heights of the bars indicate the number of hazards implicated in the impacts.

The following are direct extracts from the published study …

Health impacts. We found 27 attributes of human health impacted by climate hazards, of which death, disease and mental health were the most commonly observed. Death was associated with multiple damaging physiological pathways from hyperthermia during heatwaves (for example, from 1980 to 2014, over 780 events of excess human mortality were reported during heatwaves worldwide), drowning during floods (approximately 3,000 deaths in the 1998 floods in China), starvation during droughts (approximately 800,000 famine deaths attributed to the Ethiopian drought in the 1980s), blunt injury during storms (roughly 140,000 deaths occurred in the 1991 Cyclone Gorky in Bangladesh) and asphyxiation during fires (approximately 173 deaths occurred in the 2009 Australian Black Saturday fire).

Food impacts. We found ten attributes of food systems that were impacted by climate hazards, of which impacts on the quantity and quality of food from agriculture, livestock and fisheries were most commonly noted. Agricultural yields were impacted by direct physical loss and indirectly by exceeding physiological thresholds of crop plants.

Water impacts. We found that the quantity and quality of fresh water were critically impacted by climate hazards. Drought, warming and heatwaves caused wells to run dry and reduced water levels in reservoirs, forcing water shortages and mandatory water restrictions. Drought, for instance, led to temporary drinking water shortages for over 200,000 people in Puerto Rico in 1997–1998 and 33 million people in China in 2001.

Infrastructure impacts. We found 21 attributes of infrastructure impacted by climate hazards, of which the electricity, transportation and building sectors were most critically affected. Impacts to electricity and the electrical grid were commonly cited. Heatwaves, for instance, caused overheated power lines to sag into trees and short out. Heatwaves also reduced the efficiency of power conductance and hydroelectric production from a loss of generator cooling. Droughts reduced hydroelectric generation due to low water supplies, and dry soil conditions acted as an insulator causing overheating and melting of underground cables. These impacts on electricity generation and conduction frequently coincided with peak demands during heatwaves at times resulting in complete shut-downs.

Economic impacts. We found 16 attributes of the economy impacted by climate hazards, including economic losses, diminished labour productivity, jobs and revenue. Economic losses were often most dramatic after extreme events, and encompassed immediate costs such as those associated with property damage as well as indirect costs.

Security impacts. We identified 11 attributes of human security impacted by climate hazards, critically related to dislocations, increased conflict and violence, and disruption of the social fabric. Climate hazards forced hundreds of millions of people out of their homes for different reasons and durations, including evacuation (temporary planned movement), displacement (unplanned forced change of residence) and migration (permanent change of residence). For example, hundreds of thousands of people were displaced after floods in China and Pakistan, and storms in Central America, the United States and Bangladesh, to name a few. The recurrence of climate hazards also caused temporary displacement to become permanent

How many wake up calls do we need?

Assistant Professor Daniele Spirandelli and co-author of the study …

“The evidence of climate change impacting humanity is abundant, loud and clear. Clearly, the outstanding question is—how many wake up calls will it take to wake up?”