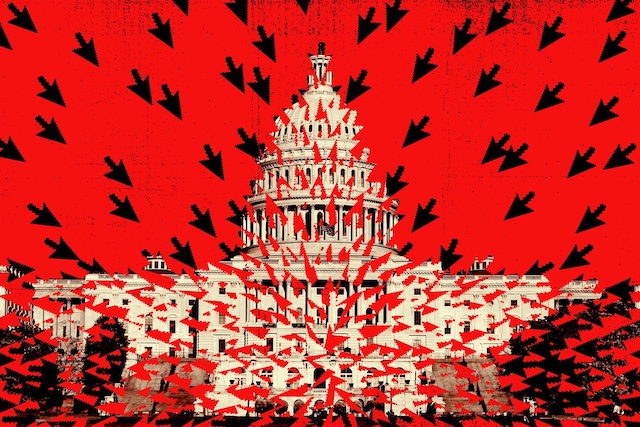 I occasionally write about QAnon. Given the events of last Wednesday, it is perhaps time to once again check in on this political fantasy cult.

Moving on, let’s see how this is all connected with the storming of the US Capital last Wednesday on Jan 6, 2020.

Storming the Capitol – Who is the blame?

Shira Ovide asks this very question within the NYT under the title of “Trump. Twitter. QAnon. Who’s to Blame?“. The opening is a statement of the rather stark reality we now face …

I sat mouth agape on Wednesday as a mob who believed the presidential election was stolen from President Trump — it wasn’t — stormed the Capitol. It was shocking, and so is the relatively large percentage of Americans who have said that they didn’t believe Joe Biden won fairly, despite no significant evidence.

None of it should be a surprise. Even prior to the election Trump was already banging his toy drum and megaphoning about a fraudulent election. His merry band of MAGA cultists picked up the beat and with glazed eyes they slurped up this toxic cool-aid. The pro-Trump news outlets also pandered to it all and fanned the flames.

Rather obviously a lot of interrelated forces led up to it all, and so the article by Shira is an analysis of all that. He tackles it by interviewing various subject matter experts to get their insights.

But this is a posting about QAnon?

Well yes, it is all complicated, but we do now have this insight …

When I listened to President Trump’s recent phone call with Georgia officials, I was struck by how many of his false claims about the vote being stolen from him were lifted straight from internet conspiracy land, particularly from QAnon-related forums and message boards.…

…We’re seeing how dangerous it can be when someone as powerful as the president plays into a growing movement that has split from objective reality….

…we might be better off if the internet didn’t exist…

…Fox News has been a corrosive influence, but it’s been made worse because the talk news clips go viral…

Indeed yes, all these new technologies … interact with one another in ways that make it hard to predict how they’re going to affect the world

So now we have vast numbers of people who have lost their connection to objective reality and nobody has any idea on how to fix that.

President Trump appears to have gone full QAnon. Essentially, the conspiracy theories that he has been amplifying about a “stolen election” are coming straight from QAnon. So that far right part of the ecosystem, further right even than Fox News, but really located around that small universe of sites and around these alternate social media platforms, that appear to be what the president is listening to. So we have this really strange phenomenon where the president is basically the cult leader for QAnon, he’s the figure of worship and veneration, and he also appears to have drunk the Kool-Aid.

Conspiracy Theory: It was really a Mob on the Left

This idea has been robustly debunked, there’s no evidence the mob storming the Capitol was made up of liberal activists posing as Trump supporters.

Trump himself spoke to them all, specifically directed them to march on the Capital, said he would go with them, then later told them he loved them and that they were special. Rather obviously he himself knows that they were his people.

Beyond even that, the folks who actually took part are rather upset that they are being labelled by some as ‘antifa’.

Katie Dowd writes about this under the title “A QAnon promoter stormed the Capitol. Now, he’s upset people are saying he’s ‘antifa’” …

…The Q Shaman is an Arizona man named Jake Angeli, who has been vocally and publicly in favor of President Donald Trump and a slew of far-right conspiracy theories for years. He’s also, as his name indicates, a big QAnon believer…

…Despite his well-documented history as a Trump supporter, on Wednesday night the right-wing media ecosystem turned on him. Lin Wood, the lawyer behind several failed suits to overrun the presidential election, tweeted a photo of Angeli and others who broke into the Capitol with the caption, “Indisputable photographic evidence that antifa violently broke into Congress today.” The tweet is no longer available as Wood’s Twitter account was banned.

The talking point was also picked up by Pastor Mark Burns, another big name on the pro-Trump social media circuit. “This is NOT a Trump supporter…This is a staged #Antifa attack,” he tweeted with a photo of Angeli posing on the Senate dais….

Angeli himself responded to the Wood tweet, trying to clarify that he is, in fact, pro-Trump.

“Mr. Wood. I am not antifa or blm,” he wrote. “I’m a Qanon & digital soldier. My name is Jake & I marched with the police & fought against BLM & ANTIFA in PHX. Look up OAN’s coverage of July 4ths rally in PHX capital. I was standing against the BLM mob out numbered but unphased. Look it up…”

Meanwhile Fox News does what Fox News does best, they presented fiction as fact. The false antifa claim was amplified by Fox News hosts Sean Hannity and Laura Ingraham, and on Thursday morning, Rep. Mo Brooks, an Alabama Republican, was tweeting it, too.

Given their long well-established track record of lying, this really should not be a surprise. It does also clearly identify them as a big part of the problem.

One Last Thought for now

Basically the position remains the same. QAnon is most probably here to stay. Like most beliefs that thrive, it will adapt to circumstances and evolve.

Basically because so many have invested a great deal into it emotionally. Letting go of that and coming to terms with such a waste of their time and resources for this modern myth is simply too big a leap for them to take.