Within or industrial society we live by the clock and regulate our lives with each passing tic, so both school and work start and end at specific times that are wholly independent of when the sun rises or sets. There are good practical reasons of course, because the alternative would be a road to chaos and confusion. It was not always like this. If society was still focused upon agriculture alone then it is quite probable that we would still be very much regulated by sunrise and sunset.

I do once recall attending a wedding in a west african nation and was intrigued with the complete lack of timekeeping that I was normally enslaved by. Things happened when they happened, and not at specific appointed times, but for other reasons. Status was important and so those of a high status would arrive late and make a grand entrance … except everybody liked to think of themselves as a cut above everybody else, so nobody arrived on time for anything and everybody arrived late. Knowing that everybody does this has a knock on effect, because it then nudges people to be even later and so many events will eventually happen at some point, but you can be sure it will not be at the time you were told it was going to happen. We had been invited to dinner, and at the appointed time waited and waiting at our hired house to be collected. Nobody showed, and so we all shrugged, assumed it was perhaps us getting the day wrong and proceeded to cook and eat dinner then cleaned up. Some time after that the chap who had promised to collect us turned up, and so off we set to eat dinner once again. We opted to keep quite about having just had dinner and not wishing to offend, simply rolled with it and had another dinner.

Why push the clock forward 1 hour

Our own strict self-enslavement to the clock has distinct advantages of course, we can get a lot more done and don’t waste a lot of time waiting, so this all happens regardless of what the sun is doing. However, during the summer months having an extra hour of daylight in the evenings is something we all enjoy having and so we sacrifice an earlier sunrise in order to gain that extra hour of leisure time in the summer evenings.

It makes a lot of practical sense, but only if you don’t live on the equator where there is very little seasonal variance, or live so far north in Iceland for example that putting the clocks forward offers no real benefit because the length of the day is already greatly extended.

When did it all Start?

The chap who got the ball rolling was George Hudson a New Zealander who first proposed the idea of a two hour leap forward in 1895 and his paper on it sparked a lot of interest. Quite independently, a UK Builder, William Willett observed that people slept during daylight when he was out for an early morning ride in 1905 and so he proceeded to campaign in the UK for moving the clocks forward in the summer. His initial proposal was for an 80 minute jump, and that we would get there via 4 successive 20 minute jumps over 4 weeks, but of course we now have a 1 hour jump because that is a lot easier to manage nationally.

Things really began in earnest  during 1916. That is the year that Germany and Austria-Hungary as a nation advanced their clocks forward for 1 hour of  Sommerzeit in April. It is also the same year in which the UK introduced the Summer Time Act 1916 and so the UKs clocks all went forward for the summer that May, and we have been doing it ever since.

It might be surprising to learn, but most humans don’t. Here is a small map that shows you who does and does not … 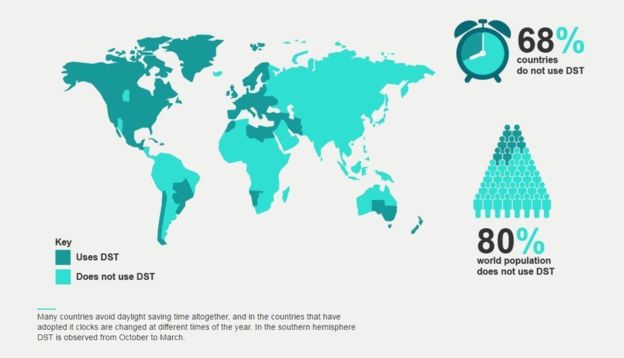 Will it ever change?

Perhaps, or perhaps not. The debate rages on as always. For example there has been a proposal to have double summer time in the UK. Basically one hour forward in winter and two hours forward in summer, and so we not only gain even more evening daylight, but we also fall into sync with the time in many european nations. However, such proposals are met with “You have got to be F***ing kidding me” from Scotland and the North of England where it would lead to a 10am sunrise in the winter.

There are also proposals for various studies to examine how real the benefits to all this are. However, regardless of how you might feel about having it or not having it, or what evidence you might have to support or oppose it, the really clear benefit to all is when we all stay in sync and coordinate our schedules, and so even the most hardened opponent of summer time will be drawn to fall in line and keep in sync with everybody else.

So why am I babbling about all this?