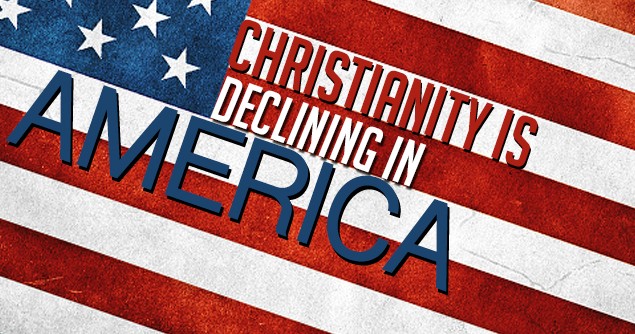 A massive new survey from PRRI reveals seismic shifts in the religious landscape within the US. The report is based on findings from the single largest survey of American religious and denominational identity ever conducted, based on interviews with more than 101,000 Americans from all 50 states conducted across 2016. The report includes detailed information about religious affiliation, denominational ties, political affiliation, and other important demographic characteristics.

Fewer than one in five (17%) Americans now identify as white evangelical Protestant, but they accounted for nearly one-quarter (23%) of the public just a decade ago in 2006. Over the same period, white Catholics dropped five percentage points from 16% to 11%, and white mainline Protestants have shed an equal number, decreasing from 18% to 13%.

The bottom line here is that there has been unprecedented growth of the religiously unaffiliated.

Here are a couple of the major findings that clearly underline their observation that the US religious landscape is undergoing a dramatic transformation.

There are 20 states in which no religious group comprises a greater share of residents than the religiously unaffiliated. These states tend to be more concentrated in the Western U.S., although they include a couple of New England states, as well. More than four in ten (41%) residents of Vermont and approximately one-third of Americans in Oregon (36%), Washington (35%), Hawaii (34%), Colorado (33%), and New Hampshire (33%) are religiously unaffiliated.

The largest group is now the religiously unaffiliated … 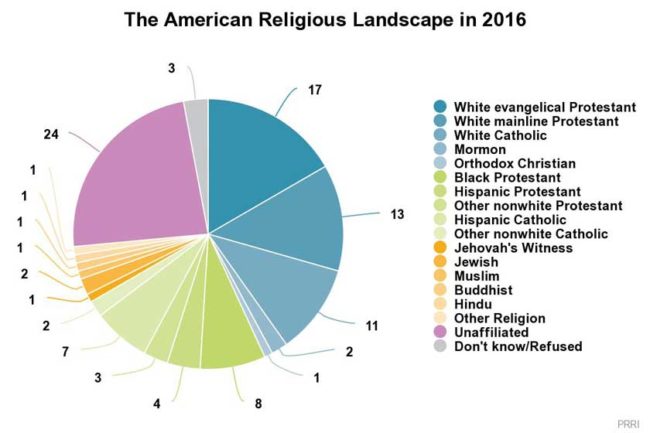 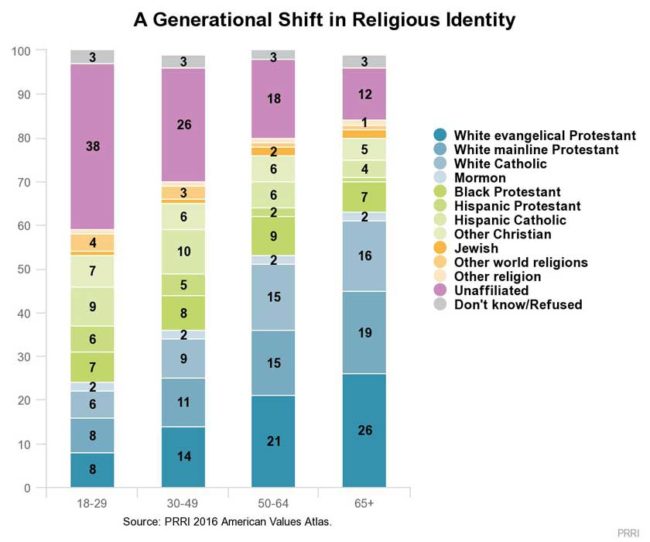 Is anybody really surprised?

There are people who believe specific things which most now find utterly immoral, repugnant, or simply absurd – the demonising of people for simply having a different sexual orientation, or simply having a different belief, or no belief. The promotion of mythology as fact, and the rejection of well-established scientific facts as myths. Holding such beliefs is fine, but when you then attempt to force such beliefs upon everybody else then you have crossed a line.

An example of how to get it right is perhaps the Amish community who eschew the use of modernity and drive around in horse-pulled buggies. They don’t insist that everybody else must do the same, or throw a hissy fit and cry persecution when faced with wholly valid criticism.

An example of how the evangelical community gets it very wrong is exemplified by Kim Davis, the County Clerk who not only refused to personally facilitate a request from a couple for a gay marriage, but also banned all her staff from doing so. What others do was quite frankly none of her F**king business. All she needed to do was to simply step aside when faced with such a request with “I’m sorry, I’m not able to assist, but my colleague over there will happily assist you”. Instead we ended up with the obnoxious charade that prevailed.

Seriously now, why oh why would anybody with any sense of decency or integrity wish to be associated in any way with modern intolerant evengelicisim? This is a group that has not only got a long track record of attempting to impose what they believe on everybody else, but has now happily tossed all their principles and values under the bus to support a pussy-grabbing dishonest and utterly incompetent narcissist.

On that same note, why oh why would anybody wish to continue being part modern Catholicism? This is a faction of belief that has for decades been not only covering up, but has also been enabling child abuse on an industrial scale.

Given the rise of the religiously unaffiliated and the rapidly shrinking religious community, I can perhaps sum it all up with just a few words – actions have consequences.

I can of course translate that into Bible speak  …

“whatever a man sows, that he will also reap” – Galatians 6:7

You can find the full complete report here. – That’s a link to a PDF that is roughly 50 pages long

If interested to see the questions people were asked, then you can find that here.

The AP Press Release in Here

The PRRI summary is here.