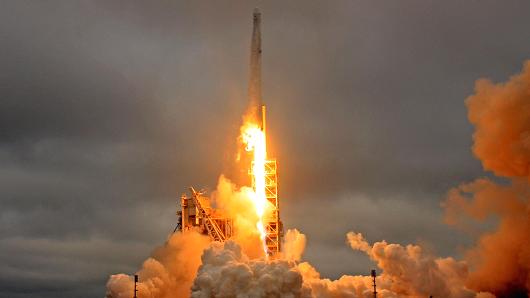 The one constant that persists is change. We constantly tweak and refine what we have, and so it is perhaps inevitable that change will continue to persist and disrupt. One news item popped up recently concerning SpaceX and how what they are doing has the potential to impact us all in a most unexpected way. Well yes, we are all familiar with Elon’s ambition to colonise Mars, and so if he is ever going to achieve that then he needs a cash cow to start pumping out tons of money to fund the venture. It would appear that he just might have come up with something that will do just that – “Starlink“.

SpaceX is on a collision course with the world’s biggest telecom and satellite manufacturing companies, as it steps up development of its “Starlink” network of satellites.

The company will soon test its first satellites, Microsat 2a and 2b, which are headed for orbit aboard SpaceX’s Falcon 9 from Vandenberg Air Force Base, California, according to documents filed by the Federal Communications Commission (FCC). These satellites will take the next step into space, which is critical for the network’s progress.

OK, so they will pop up a few satellites just like Iridium and others … so what?

Be aware that right now there is a race on to build a global spanning 5G network. A few key points …

There are huge challenges here, namely the software involved in managing a network of this complexity, but the potential is also huge.

Imagine the not too distant future where you can buy, at a hopefully reasonable price, access to a global 5G broadband network that just works no matter where you are on the planet. Perhaps something that is a tad more enticing for some is the dream of being able to cut themselves free from Time Warner or Comcast.

SpaceX is not the only game in town

This is not a one horse race, others have similar ambitions and so there is competition. That helps to motivate and focus on getting it all done asap, because clearly whoever gets into orbit and operational first will have a clear and very distinct advantage.

So who else is in the game?

“disruptive innovation” is very much on the cards here.

If we think for a moment about the great firewall of China, then clearly that works because the Chinese government can control the land-based Telecommunications network. A global array of Satellites breaks that monopoly.

There are other things in the pipeline as well – eSIMs are coming.

We will cease the need to stuff little bits of plastic into our phones whenever we switch provider.

You want to change operator? No problem, just one call and the new details get deployed into your eSIM – job done.

This is not a dream, Apple Watch 3 will be using eSIMs, and so network switching can be automated and instant.

What you have now was never the end-game, but instead was just one step of an ongoing and continuous series of connected steps. Innovation has not paused and so we will soon potentially take yet another step into an even more globalised world.