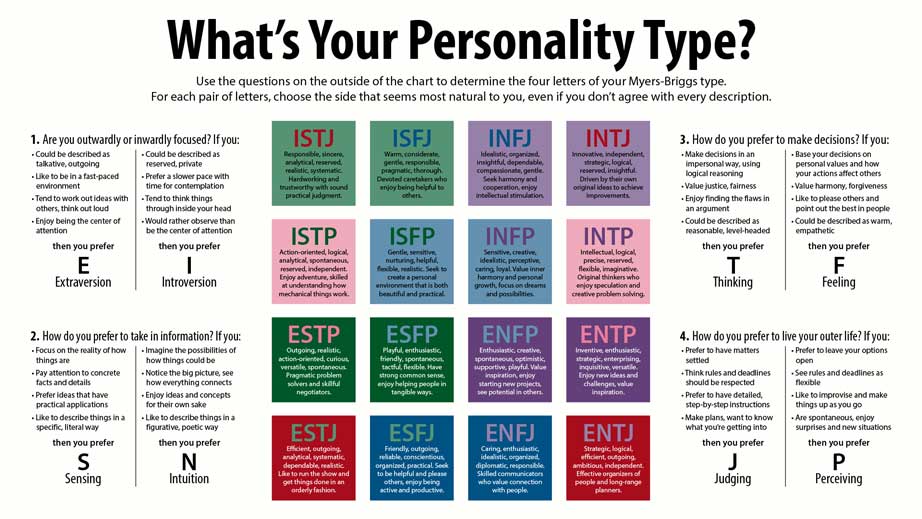 Let’s start with the basics by asking what Myers-Briggs claims to be.

The idea is that you experience the world using four principal psychological functions – sensation, intuition, feeling, and thinking – and that one of these four functions is dominant. To work out where you stand you answer a series of questions and that is then supposed to identify which one of the 16 types (4 x 4) that you can be categorised with.

With that understanding you can then be supposedly slotted into a role or nudged in the direction of a career that is ideal for your specific type.

This is the Myers-Briggs Type Indicator (MBTI).

Here is the MBTI chart 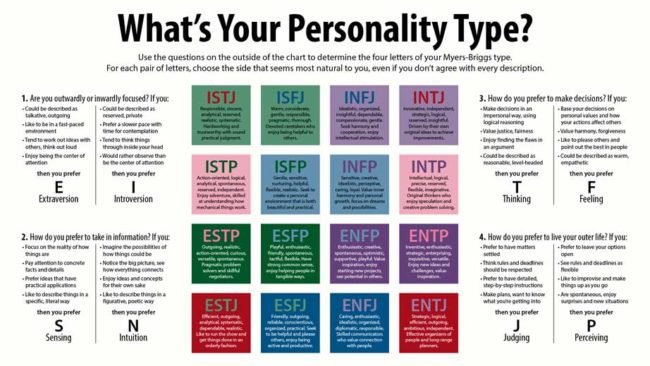 It is rather popular within the business sector and is beloved by many HR departments and also career councillors who are eager to use it to justify guidance. Costing roughly $15-$40 for each test of an individual, roughly about 2 million people per year are measured using this. More than 10,000 companies, 2,500 colleges and universities and 200 government agencies in the United States use the test, so there is a high probability that you might have encountered it.

It’s estimated that 50 million people have taken the Myers-Briggs personality test since the Educational Testing Service first added the research to its portfolio in 1962.

The name Myers-Briggs comes from the mother-daughter team who dreamed all of this up – Katharine Cook Briggs and her daughter Isabel Briggs Myers. They based it upon a hypothesis proposed by one of the most famous psychologists of the 20th Century Carl Jung. It was he who had speculated that humans experience the world using four principal psychological functions. Taking this idea from a book by Jung in 1923 the mother-daughter pair turned it into a commercial enterprise, one where a series of questions would identify which of these types dominated your personality. The Briggs Myers Type Indicator Handbook was published in 1944 with the belief that being able to identify a personality type would enable women who entered the workforce to be slotted into a job that they would be happiest within. From there its popularity grew into what it is today.

Does it really work?

In essence no, it is BS and has no scientific basis.

The foundation for it all, Jung’s work is not founded upon controlled scientific studies. While he was highly influential, he was also a crank who believed in astrology, alchemy and the paranormal.

While it was Jung’s 1923 book, Psychological Types, that acts as the alpha source for the basic idea of types, it was Briggs and Myer, who developed MBTI and took it all way beyond Jung’s “projective” approach, and adopted a “structured” approach.

There have been claims of studies that have examined it and claim to support it. The problem is that these studies are not scientific or have serious flaws and can’t be relied upon.

On a more practical level, it is not reliable. If you take the test, and then five weeks later take it again, there is a high probability that you will get a completely different answer.

The interesting — and somewhat alarming — fact about the MBTI is that, despite its popularity, it has been subject to sustained criticism by professional psychologists for over three decades. One problem is that it displays what statisticians call low “test-retest reliability.” So if you retake the test after only a five-week gap, there’s around a 50% chance that you will fall into a different personality category compared to the first time you took the test.

The foundational hypothesis is seriously flawed

Are you an extrovert or an introvert?

According to MBTI one of those specific specific traits must dominate.

While there are clear stark examples at either end of the scale, the reality is that it is not binary, but instead is a bell curve with most of us being a bit of each in different circumstances, hence fall into the middle. To strive to box you into just one binary choice is not meaningful or realistic. As explained by that same Fortune article …

A second criticism is that the MBTI mistakenly assumes that personality falls into mutually exclusive categories. You are either an extrovert or an introvert, but never a mix of the two. Yet most people fall somewhere in the middle. If the MBTI also measured height, you would be classified as either tall or short, even though the majority of people are within a band of medium height.

The consequence is that the scores of two people labelled “introvert” and “extrovert” may be almost exactly the same, but they could be placed into different categories since they fall on either side of an imaginary dividing line.

Personally I tend to think of it as more akin to Astrology. It is popular because of its simplistic horoscope-like methodology. People are also curious about a quick easy answer and have a bit of fun taking part to find out their MBTI measure. Unfortunately it is also pure unadulterated BS and does not really tell you anything meaningful or objective.

It does have its fan club, and understandably so. If you invest time and money into the process, then coming to terms that it is all bunk can be challenging, so those that have faith in it will probably not be deterred …

Corporate America has its own religions, and one of them is Myers-Briggs. – Lillian Cunningham

Question authority. No idea is true just because someone says so. Test ideas by the evidence gained from observation and experiment! If a favorite idea fails a well-designed test, it's wrong! pic.twitter.com/kfb4pv9iyf