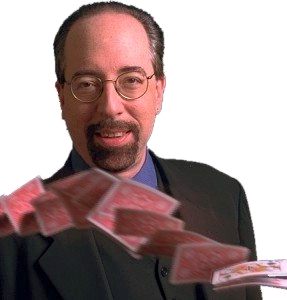 Jamy Ian Swiss uses the term “The Honest Liar” to describe himself, so what exactly is he on about? Well, the term is wholly appropriate and accurate because he is in fact a world renowned sleight of hand performer who specializes in close-up card magic, in other words his full-time career is to fool you. The deal is that you know that he is doing tricks, he tells you that, and then proceeds to amaze you with illusions that require no supernatural ability at all.

In other words, he is indeed lying to you, but he is being honest about the fact that he is. It is the unwritten contract we have with all illusionists and mentalists; we want and expect them to fool us.

There are of course a few scoundrels out there who break this contract and instead claim that their ability is really due to their psychic gift (Hi Uri Geller). Oh and since we are on the topic, Uri’s powers are claimed to have been gifted to him by aliens, so we are not only faced with an extraordinary claim that such psychic powers are real, but also the even more extraordinary claim that “aliens help him do it”. He has indeed successfully fooled many into thinking such powers are real, but the fact that illusionists such as James Randi can replicate what Uri does using stage magic  can only mean that if Uri is using Psychic powers to do what he does, then he is doing it the hard way.

So yes, Uri is indeed lying to us in a most dishonest manner … unlike our friend Jamy, who is an honest liar.

You may in fact be familiar with others such as Darren Brown and have seen some of the truly astonishing things that he does. If you have indeed seen him, then you will also know that it is all an illusion, he makes that 100% clear and tells you that it is not real. What if Darren was not honest and instead claimed that it was all quite real and he could truly read minds – he would indeed fool many into thinking he had some amazing psychic ability.

What is also quite fascinating to observe is that both Darren, Jamy, and many other illusionists and mentalists are also skeptics. In fact I’ve personally been privileged to meet Jamy a couple of times at TAM. Not only is he the co-founder of the National Capital Area Skeptics and the New York City Skeptics, but he also writes columns for Skeptic magazine.

His profession is to fool you in an honest way, and so he is perhaps the very best qualified to be a skeptic because he not only knows how easy it is to be fooled and tricked, he also knows how all the tricks are done. The JREF have just put out the following instalment of “The Honest Liar” on YouTube in which Jamy punctures the pretence of homoeopathy. In this he asks how much is too much to pay for a remedy with nothing in it?