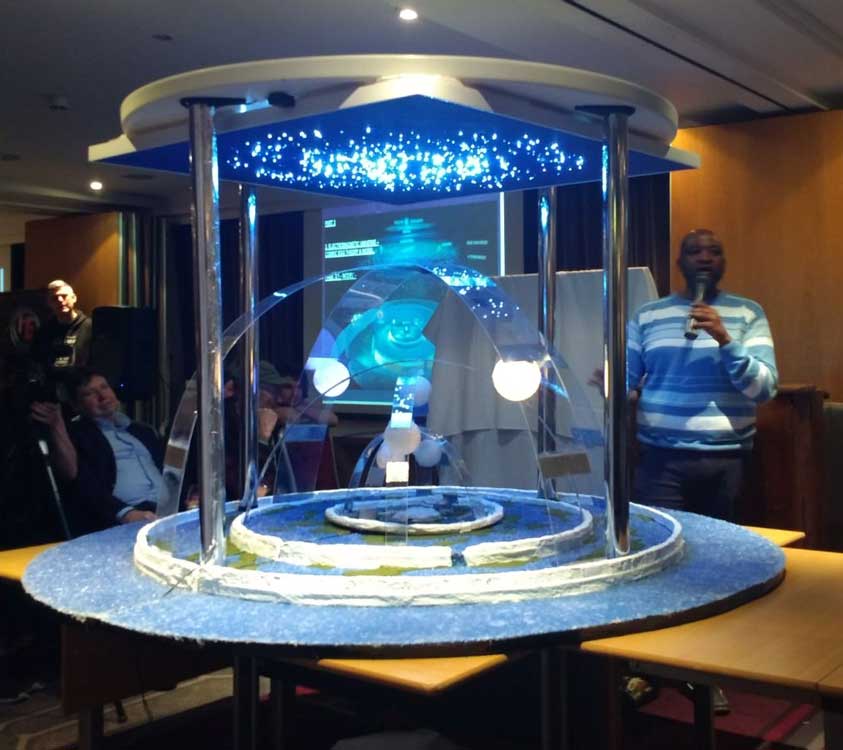 I thought I was done with posts about the Flat earth conference that took place in the UK, but I find that I’m returned back to it for one more pass. Michael Marshall, who attended has an article in Gizmodo in which he expands upon much of what he saw while there. He also makes a rather interesting point that is well worth highlighting, hence this posting.

It’s the subject line of his article that perhaps tells you where he is going with his review of it all – Why We Should Listen to Flat Earth Believers (Even Though They’re Completely Wrong).

What did he find while there?

Deeply crazy stuff, and that’s not simply a reference to the promotion of the idea that we live in Diskworld. We will get to that in a minute, but first let’s ponder on the basic idea.

How new is the idea that the world is not Flat?

The knowledge that the world is not flat has been well-established for centuries and is not controversial. There is a popular urban legend that Christopher Columbus was a rebel who rejected a prevailing belief that the earth was flat and set sail to prove that it was round. A Washington Post article from a few years ago busts that myth …

Historians say there is no doubt that the educated in Columbus’s day knew quite well that the Earth was not flat but round. In fact, this was known many centuries earlier.

As early as the sixth century B.C., Pythagoras — and later Aristotle and Euclid — wrote about the Earth as a sphere. Ptolemy wrote “Geography” at the height of the Roman Empire, 1,300 years before Columbus sailed, and considered the idea of a round planet as fact.

“Geography” became a standard reference, and Columbus himself owned a copy. For him, the big question was not the shape of the Earth but the size of the ocean he wanted to cross.

The article goes on to explain where the myth came from and who started it.

If indeed it is well-established, then why has a Flat Earth movement emerged all round the globe?

Well, that is the real question.

What is deeply interesting is not simply the emergence of the idea that the earth is flat, but the observation concerning all the anti-intellectual baggage that appears to come with it …

Iru Landucci, one of the conference’s headline speakers, has researched the Flat Earth since 2014 and found no problems marrying his rejection of the spherical Earth with his other areas of interest: researching the New World Order, 9/11 truth, exposing the supposed perils of GMOs and vaccines, and promoting the wonders of Germanic New Medicine.

“99% of all disease is psychological,” he explains to the audience. “Even cancer is caused by emotional factors.”

As it turns out, Landucci flew in from his native Argentina for the conference, arriving a day earlier than anyone expected – arguably exposing just one of the pitfalls of a world view which struggles to explain the International Date Line.

Much of what Michael Marshall observed ticked many familiar boxes …

we are told climate change and evolution are fake; the moon landing was a hoax because Satanism is at the heart of NASA’s agenda (as proven by how many astronauts do the “devil horns” finger gesture in photos); dinosaurs were invented by an artist who simply drew a rhino crossed with a giraffe and then painted it green; atheists actually worship the Greek mountain giant “Athos”; and the Freemasons and the Jesuits control everything

… or to put that another way, if there is a weird conspiracy theory, then it’s part of the package deal. Buy into one conspiracy and get nine more completely free.

When I say weird, I truly do mean alternative weird on steroids …

Welsh YouTuber Martin Liedtke believes the globe model is the work of Satan, “put in place to lead people into oblivion and away from The Creator”. He explains that Noah’s flood took place just 1,000 years ago, as is proven by the presence of Middle Age architecture in some Middle Age drawings of Biblical events. He also believes the ageing process is optional: you can choose not to age.

This is not just one eccentric speaker, they were all like this. Each came with a collection of truly bizarre conclusions. For example Dave Murphy who is quite literally taking the piss …

Another of the speakers, Dave “Allegedly Dave” Murphy, also rejected the spherical Earth model following traumatic events. Murphy served as a volunteer firefighter in New Jersey and witnessed 9/11 at close range, leading him in 2005 to become a believer in Truther conspiracy theories. According to Murphy’s website, that same year he had a mid-life crisis which convinced him to start living off-grid. Alongside his Flat Earth beliefs, Dave advises on how and why to drink and wash with your own urine, highlighting that urine “reverses ageing” and “is helpful” with AIDS, cancer, smallpox and more.

Then there was Martin Kenny, with a Cosmic Egg cosmological model (he even brought it with him, see picture) …

When it comes to constructing a grand narrative around Flat Earth belief, nobody at the conference came close to Martin Kenny, who presented his “Cosmic Egg” model on Saturday evening. Summarising his theory hardly does justice to its spiralling complexity, but his starting point is the (mistaken) assertion that in the foundational myths of almost every culture in history, the universe was hatched out of a giant egg. With that in mind, reasons Kenny, the universe itself must be egg-shaped, with the Earth at the centre. This is the smallest leap in logic Kenny will make all evening.

When you consider it all, what you will discover is that the word “bizarre” is simply too tame to truly describe the scope of it all.

So Marsh is leading up to this one key observation …

Looking back at my weekend with Flat Earthers, it is striking how many people who doubt the global model of the Earth also subscribe to all manner of other beliefs, from Biblical literalism to occultist paranoia, from anti-vaccination to quack cancer cues, from antisemitism to Aryanism. But it was also  just as striking how many people whose journey into believing the Earth is flat included traumatic events or personal crises.

This, perhaps, is why it is so important for us to listen to and talk to Flat Earthers, and to approach them as much with understanding as ridicule: if they can see no light in mainstream society, their rabbit hole may only get deeper and darker.

The Flat Earth belief is rooted in human psychology and emotions, not reason.

If you attempt to explain why we know the world is not flat, and even suggested simple experiments to test this, then what you would discover is an amazing ability to preserve the belief by rationalising away such rebuttals. It is a belief that leads those that hold it to feel special, privileged, and no longer one of the blind sheeple, so facing criticism of the idea will result in a deep need to preserve it.

Rather obviously you can make observations such as “NASA have pictures and have sent people into Orbit“. That would be met with the idea that NASA are part of a grand conspiracy, and so down the rabbit hole you go into an alternative world where dark nefarious forces conspire. It is a place where the flat-earth believer takes up a role as a lone beacon of light resisting it all and standing up for “truth”.

The stance creates meaning, purpose, and bestows a mission for people who have found themselves adrift and lost.

We might indeed ridicule and mock the idea, but Marsh is also correct, these are people who do perhaps merit sympathy and compassion.