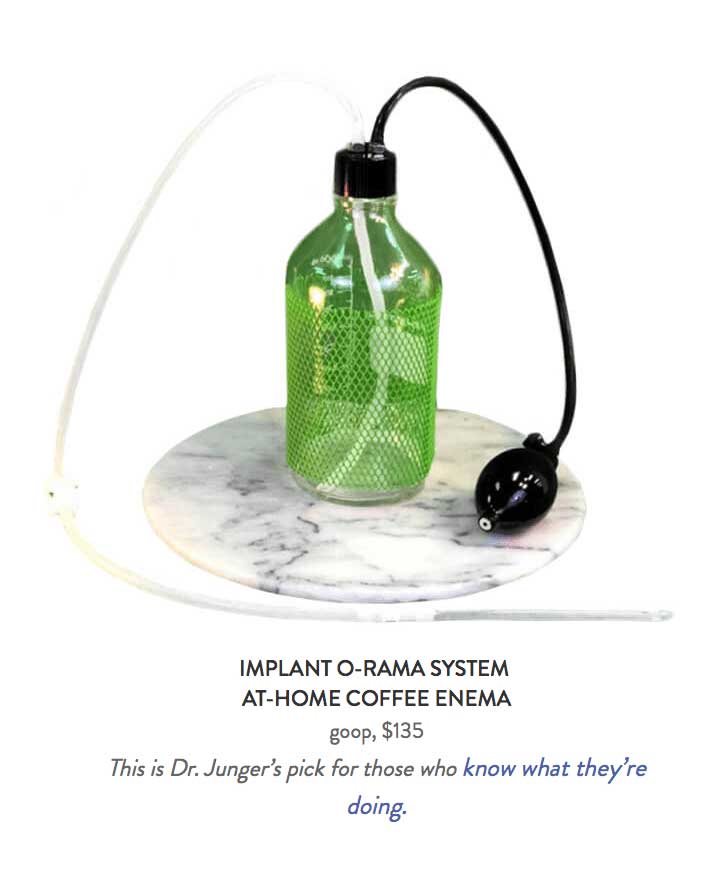 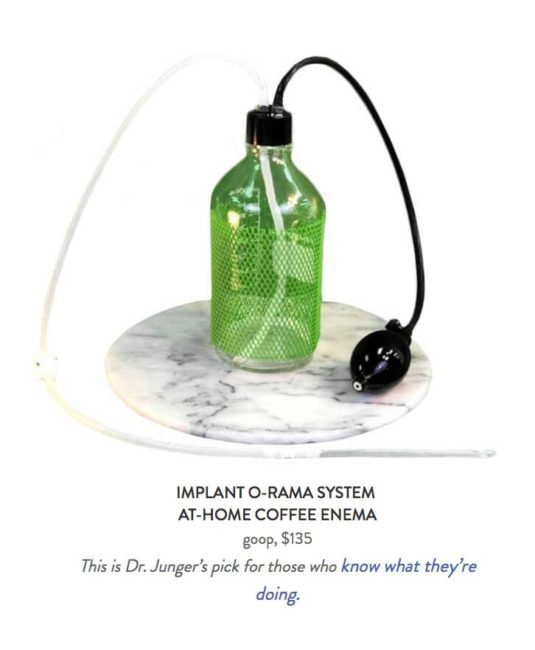 If the idea of shoving coffee up your bum immediately invokes the name “Gwyneth Paltrow”, then you are spot on. Her rather infamous Goop lifestyle brand has the above available as a special new year offer.

Jen Gunter is an obstetrician and gynaecologist who has written an article within the Guardian about a week ago that talks about this … in detail.

For those of a squeamish disposition the short version is “Don’t do that, it’s bad for you”. For those curious to understand exactly why it is bad for you and not actually part of a healthy lifestyle, read on.

First, let’s do a quick bit of Goop history. 2015 saw their promotion of Vagina steaming, and last year we had the infamous jade egg. I’d of course be tempted to suggest that they can take their jade egg and shove it up their … except of course that is exactly what they were selling it for, and so I suspect if they practise what they preach then they are quite literally doing exactly that.

Their latest “wellness” promotion is the idea that washing out your colon with coffee is a good idea (hint – it really is not).

Dr Jen Gunter lays it all out in very plain terms …

The interview with Junger is filled with information that is unsupported both by the medical literature and by human anatomy and physiology. There is no data to suggest that a “colonic helps with the elimination of the waste that is transiting the colon on its way out”. That is what bowel movements do. There are no toxins to be cleansed or irrigated. That is fake medicine. A 2011 review on colonics concluded that doctors should “advise patients that colon cleansing has no proven benefits and many adverse effects”.

She also digs into the pseudoscientific babble deployed by Goop and others who promote this daft idea. One gem is the term “mucoid plaque”. This is not a medical word. Anybody selling you on this being a thing, is running a classic snake-oil con …

Apparently, the term “mucoid plaque” was coined by Richard Anderson, who is a naturopath, not a gastroenterologist, so not a doctor who actually looks inside the colon. I looked “mucoid plaques” up in PubMed. Guess what? Nothing colon-related. There is not one study or even case-report describing this phenomenon.

There is in fact a “Mucoid plaque” wikipedia page that explains that “The concept of a ‘mucoid plaque’ has been dismissed as having no anatomical or physiological basis“. Translation: the term is basically meaningless gibberish. This however is in the context of the Goop brand, so it quite naturally fits right in with everything else they sell.

The lack of any benefits of Colonic irrigation

It is not a medical intervention, there are no documented benefits. Those that claim it is beneficial have no scientific evidence to support their claims.

Via the Mayo clinic …

It is actually worse than you think. Not only are the supposed benefits non-existent, but doing this also brings these risks ..

The only tangible benefit here is that the practitioner has managed to slightly increase their wealth by conning you.

As a quick Reminder – Goop is an award winning brand

The award however is not one that they will ever be shouting about. The UK’s Skeptic Magazine bestowed upon Goop the “Rusty Razor” award last year and identified Goop as the Worst Pseudoscience of 2017.

What is perhaps made clear by Goop’s latest coffee enema offering is that after winning “worst pseudoscience” of 2017, they are clearly quite determined to maintain that award and want to go on to also win it in 2018 as well. So far they are off the a flying start.