Warning: It is not good news. You can find it on this page here.

Let’s go though some of the highlights within it.

Greenhouse Gases are all still Increasing

The following chart is the summary of it all. It shows that the upwards tick is still ongoing, and shows no sign of changing. 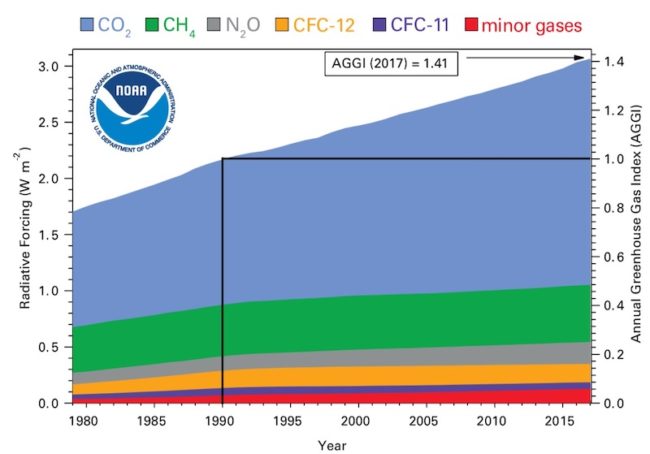 We now breath an atmosphere that contains levels of CO2 not seen in 3-5 million years.

Carbon dioxide is the single most important anthropogenic Greenhouse gas in the atmosphere, contributing approximately 66% of the radiative forcing by long-lived greenhouse gases. It is responsible for approximately 82% of the increase in radiative forcing over the past decade and over the past five years. The pre-industrial level of 278 ppm represented a balance of fluxes among the atmosphere, the oceans and the land biosphere. Atmospheric CO2 reached 146% of the pre-industrial level in 2017, primarily because of emissions from combustion of fossil fuels and cement production (the sum of CO2 emissions was 9.9 ± 0.5 PgC in 2016), deforestation and other land-use change (1.3 ± 0.7 PgC average for 2007–2016). Of the total emissions from human activities during the period 2007–2016, approximately 44% accumulated in the atmosphere, 22% in the ocean and 28% on land; the unattributed budget imbalance is 5%. The portion of CO2 emitted by fossil fuel combustion that remains in the atmosphere (airborne fraction), varies inter-annually due to the high natural variability of CO2 sinks without a confirmed global trend.

Methane contributes approximately 17% of the radiative forcing by long-lived greenhouse gases. Approximately 40% of methane is emitted into the atmosphere by natural sources (e.g., wetlands and termites), and about 60% comes from anthropogenic sources (e.g., ruminants, rice agriculture, fossil fuel exploitation, landfills and biomass burning). Atmospheric CH4 reached 257% of the pre-industrial level (approximately 722 ppb) due to increased emissions from anthropogenic sources. Globally averaged CH4 calculated from in situ observations reached a new high of 1859 ± 2 ppb in 2017, an increase of 7 ppb with respect to the previous year (Figure 5). This increase is lower than the increase from 2015 to 2016 but practically equal to the average annual increase over the past decade. The mean annual increase of CH4 decreased from approximately 12 ppb yr-1 during the late 1980s to near zero during 1999–2006. Since 2007, atmospheric CH4 has been increasing again. Studies using GAW CH4 measurements indicate that increased CH4 emissions from wetlands in the tropics and from anthropogenic sources at mid-latitudes of the northern hemisphere are likely causes of this recent increase.

Nitrous oxide contributes approximately 6% of the radiative forcing by long-lived greenhouse gases. It is the third most important individual contributor to the combined forcing. N2O is emitted into the atmosphere from both natural (about 60%) and anthropogenic sources (approximately 40%), including oceans, soils, biomass burning, fertilizer use and various industrial processes. The globally averaged N2O mole fraction in 2017 reached 329.9 ± 0.1 ppb, which is 0.9 ppb above the previous year and 122% of the pre-industrial level (270 ppb). The annual increase from 2016 to 2017 is higher than the increase from 2015 to 2016 and practically equal to the mean growth rate over the past 10 years (0.93 ppb yr-1). The likely causes of N2O increase in the atmosphere are an increased use of fertilizers in agriculture and increased release of N2O from soils due to an excess of atmospheric nitrogen deposition related to air pollution.

“I am very concerned that the three greenhouse gases most responsible for climate change (CO2, methane, and nitrous oxide) are all rising upwards unabated,” – Prof Corinne Le Quéré from the University of East Anglia.

If nothing actually changes and this trend continues then there is simply no polite way of putting it – as a species we are basically F***ked.

Planting a few trees is simply not going to cut it.

It is not a hopeless lost cause. A great deal of awareness does exist and so meaningful decisive change is still an option. The golden opportunity is just one week away at the UN Katowice Climate Change Conference in Poland on 2nd Dec…

The 24th Conference of the Parties to the United Nations Framework Convention on Climate Change, COP24 will be held in Katowice December 2 – 14 December.

The key objective of the meeting is to adopt the implementation guidelines of the Paris Climate Change Agreement.

This is crucial because it ensures the true potential of the Paris Agreement can be unleashed, including ramping up climate action so that the central goal of the agreement can be achieved, namely to hold the global average temperature to as close as possible to 1.5 degrees Celsius

Specifically, the full implementation of the Paris Agreement means that practical actions will be unlocked with respect to all elements of the climate regime that countries are building:

In addition to the implementation guidelines for the Paris Agreement, COP24 will also see the high-level political phase of the Fiji-led Talanoa Dialogue, which aims to assess progress towards the temperature goals enshrined in the Paris Agreement.

Also at the COP in Katowice, the climate action of non-Party actors will be showcased during a series of Global Climate Action events.