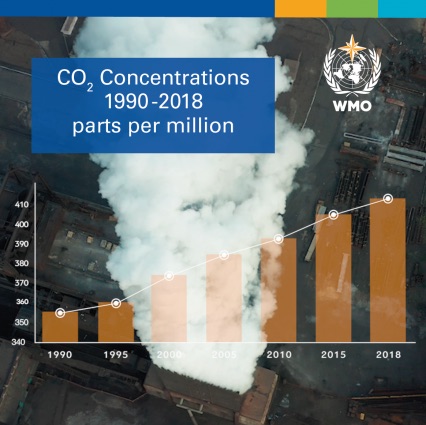 Many media outlets have been running the story. What the latest WMO Greenhouse Bulletin is telling us about emissions is something you might already know if you have your finger on the CO2 pulse.

CO2 levels within our Atmosphere are still climbing upwards.

Let’s jump into the alpha source, the actual bulletin that was published yesterday on 25th Nov 2019.

The increase in CO2 from 2017 to 2018 was very close to that observed from 2016 to 2017. That is just above the average over the last decade. Global levels of CO2 crossed the symbolic and significant 400 parts per million benchmark in 2015.

CO2 remains in the atmosphere for centuries and in the oceans for even longer.

Not a surprise, but yes, concentrations of methane and nitrous oxide also surged by higher amounts. The data comes via observations from the Global Atmosphere Watch network. That includes stations in the remote Arctic, mountain areas and tropical islands.

Since 1990, there has been a 43% increase in total radiative forcing – the warming effect on the climate – by long-lived greenhouse gases. CO2 accounts for about 80% of this, according to figures from the US National Oceanic and Atmospheric Administration quoted in the WMO Bulletin.

No Decline = Consequences for us all

“There is no sign of a slowdown, let alone a decline, in greenhouse gases concentration in the atmosphere despite all the commitments under the Paris Agreement on Climate Change,»  said WMO Secretary-General Petteri Taalas.   “We need to translate the commitments into action and increase the level of ambition for the sake of the future welfare of the mankind,” he said.

“It is worth recalling that the last time the Earth experienced a comparable concentration of CO2 was 3-5 million years ago. Back then, the temperature was 2-3°C warmer, sea level was 10-20 meters higher than now,” said Mr Taalas.

He is being polite. The stark translation is that we have in effect done nothing meaningful.

“The findings of WMO’s Greenhouse Gas Bulletin and UNEP’s Emissions Gap Report point us in a clear direction – in this critical period, the world must deliver concrete, stepped-up action on emissions,” said Inger Andersen, Executive Director of the UN Environment Programme (UNEP). “We face a stark choice: set in motion the radical transformations we need now, or face the consequences of a planet radically altered by climate change.”

CO2 growth is above average

Not only has CO2 continued to grow, but the rate at which it increases has increased.

Carbon dioxide is the main long-lived greenhouse gas in the atmosphere related to human activities. Its concentration reached new highs in 2018 of 407.8 ppm, or 147% of pre-industrial level in 1750.

The National Oceanic and Atmospheric Administration (NOAA) Annual Greenhouse Gas Index shows that from 1990 to 2018 radiative forcing by long-lived greenhouse gases (LLGHGs) increased by 43%, with CO2 accounting for about 80% of this increase

Methane (CH4) is the second most important long-lived greenhouse gas and contributes about 17% of radiative forcing. Approximately 40% of methane is emitted into the atmosphere by natural sources (e.g., wetlands and termites). About 60% comes from human activities like cattle breeding, rice agriculture, fossil fuel exploitation, landfills and biomass burning.

Nitrous oxide (N2O) is emitted into the atmosphere from both natural (about 60%) and anthropogenic sources (approximately 40%), including oceans, soil, biomass burning, fertilizer use, and various industrial processes.

Nitrous oxide also plays an important role in the destruction of the stratospheric ozone layer which protects us from the harmful ultraviolet rays of the sun. It accounts for about 6% of radiative forcing by long-lived greenhouse gases.

If you get the distinct impression from all of the above that we are well and truly fucked, then you would not be wrong. If the trend continues we will reap the consequences.

It is however not yet too late, we are still at a point where decisive meaningful steps can be taken.

The UN emissions Gap report has also now been published (26th Nov). That also warrants highlighting, but I’ll save that for tomorrow’s posting.

You might wonder why all these reports have popped up.

They are input for the UN Climate Change Conference, which will be held from 2 to15 December in Madrid, Spain, under the presidency of Chile.

Those meeting there need to deal with the facts. Having these fact-based reports created as input for that process is vital. The target audience here are the decision makers that are attending.