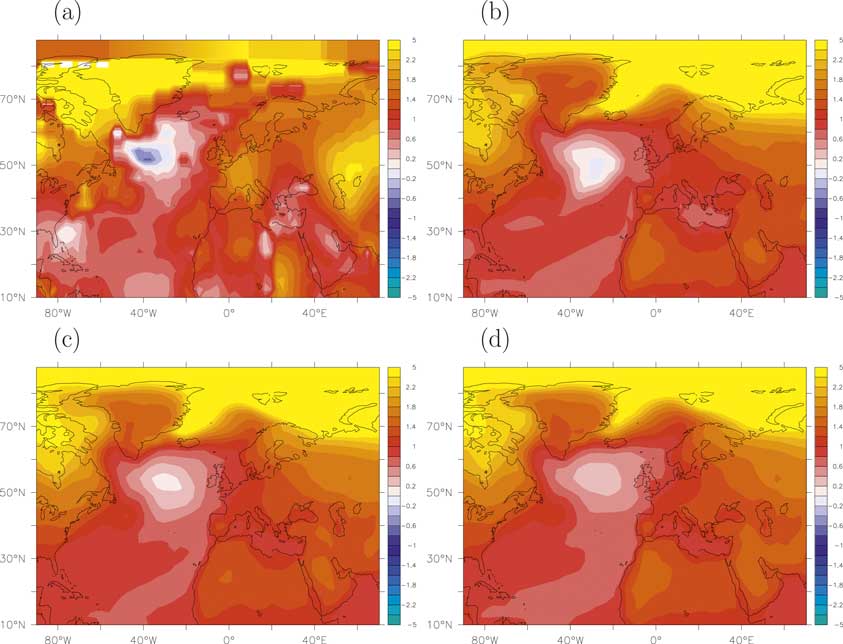 Often when seeing a map of the world that illustrates Global Warming a rather strangely persistent cold area within the North Atlantic is observed. Within the above you can see four different examples that illustrate just how persistent it is.

It has been noticed and pondered over for quite some time. A 2012 paper within the AMS journal examined the question “Is a Decline of AMOC Causing the Warming Hole above the North Atlantic in Observed and Modeled Warming Patterns?“. They concluded, yes, it was indeed associated with a decline in the AMOC (the Atlantic Meridional Overturning Circulation). The term “Gulf Stream” is perhaps a more culturally familiar way of referring to the AMOC.

The whole world is warming. The whole world? No! A region in the subpolar Atlantic has cooled over the past century – unique in the world for an area with reasonable data coverage (Fig. 1). So what’s so special about this region between Newfoundland and Ireland?

It happens to be just that area for which climate models predict a cooling when the Gulf Stream System weakens (experts speak of the Atlantic meridional overturning circulation or AMOC, as part of the global thermohaline circulation). That this might happen as a result of global warming is discussed in the scientific community since the 1980s – since Wally Broecker’s classical Naturearticle “Unpleasant surprises in the greenhouse?” Meanwhile evidence is mounting that the long-feared circulation decline is already well underway.

Just to be clear here … yes, this was the plot for The Day After Tomorrow, and no, that was just a movie not a science documentary. There will of course be consequences, but not as portrayed in the movie.

The Body of Evidence grows – there is a new paper

Published online in Nature on 31st July, we have the results of a new study …

In essence what they have come up with is an explanation for this warming hole. Arctic sea ice loss is playing a role in all this.

The warming hole is evidence that not as much heat is being transported into that region by the AMOC (Gulf Stream), so the question to then ponder over is why the AMOC has been weakening, what has been causing that to happen?

First, let’s think about how it works.

Warm water from the Gulf is transported North, hence the common term “Gulf Stream”. Once it reaches the Arctic, the heat being carried is lost and so it sinks and flows back south. In theory this mechanism can be disrupted by several things.

our climate modelling experiments together with the forward ocean integrations imply that the recent Arctic sea-ice decline could be a plausible cause of the suggested AMOC slowdown.

… and that of course has implications …

The AMOC weakening can have important remote climate impacts, such as increased storminess over Europe. Finally, since summer Arctic sea ice is expected to disappear before the end of the current century, our study implies that the AMOC will continue to weaken, causing a further decrease in ocean meridional heat transport and reducing to some extent the global warming signal over the ocean locally in the North Atlantic. However, if this effect saturates, the North Atlantic will be warming at a pace significantly higher than currently observed. Thus, this study highlights the active role that Arctic sea-ice decline can play in ocean circulation and climate change.

This is not a definitive conclusion, but instead is an addition to the growing body of evidence that rather strongly points towards an explanation. The conversation within the scientific community continues and so this new paper simply adds more information into that conversation.