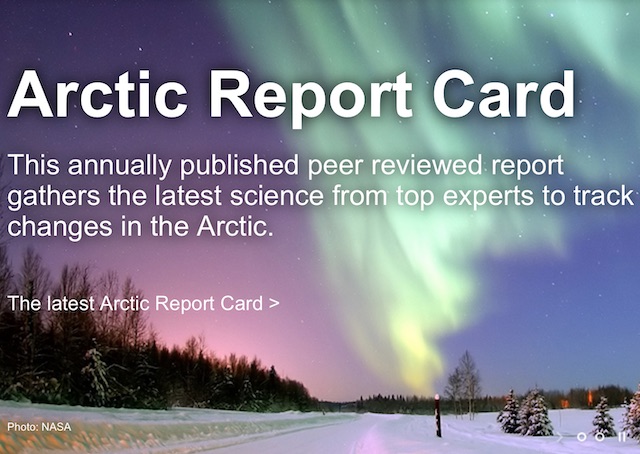 For those wondering what this is, permit me to explain. This Report Card is an annual volume of original, peer-reviewed environmental observations and analysis of a region undergoing rapid and dramatic change. Compiled by 81 scientists from 12 nations, the 2019 report card tracks a number of environmental indicators to inform decisions by local, state and federal leaders, as Arctic residents confront the challenges and opportunities presented by a rapidly changing climate and ecosystem. This latest 14th edition for 2019 was released on at the American Geophysical Union’s fall meeting on 10th Dec.

Key Message: Arctic ecosystems and communities are increasingly at risk due to continued warming and declining sea ice

The Arctic marine ecosystem and the communities that depend upon it continue to experience unprecedented changes as a result of warming air temperatures, declining sea ice, and warming waters. Arctic Report Card 2019 draws particular attention to the Bering Sea region, where declining winter sea ice exemplifies the potential for sudden and extreme change. Indigenous Elders from the Bering Sea region offer their experiences of living at the forefront of climate change.

Digging Deeper into the Details

There is way too much detail for me to cover in any depth. Briefly, The Arctic Report Card is organized into three sections as follows …(I’ve place links for each that takes you in)

The above 12 essays featured in Arctic Report Card 2019 provide comprehensive summaries of key land, ice, ocean, and atmosphere observations made throughout the Arctic in the context of historical records. Taken together, the essays also serve to highlight the many strong and complex connections within the Arctic system. It is these connections that magnify the impact of the changing Arctic environment—changes that affect ecosystems and communities on a regional and global scale.

“The speed and trajectory of the changes sweeping the Arctic, many occurring faster than anticipated, makes NOAA’s continued investment in Arctic research and activities all the more important,”

…said retired Navy Rear Adm. Timothy Gallaudet, Ph.D., deputy undersecretary of commerce for oceans and atmosphere at NOAA, who led the news conference where the report card was released.

“We need the best scientific information to support NOAA’s efforts to better understand how environmental change is affecting the Arctic and weather around the globe, to support adaptation and economic opportunities in the region, and to sustain our ocean-based Blue Economy.”

The impacts of a changing Arctic are not confined to those who live there. Through global sea-level rise, the release of permafrost carbon, and its role in regulating global weather patterns, the region is vitally connected to all of us.