Climate Denial is the rejection of what is now a well established observational fact – our climate is warming and all the fossil fuel greenhouse gases we are pumping into the atmosphere are causing it. Regardless of the tribal GOP stance on the topic, the vast majority do accept that this really is happening. This is not simply wishful thinking, in March of this year, a Yale study published the discovery that ….

There is however a huge problem – climate avoidance.

What is Climate Avoidance?

According to that same Yale report …

Only about one in three Americans (35%) say they discuss global warming with family and friends “often” or “occasionally,” although this is an increase of nine percentage points since March 2015. However, more say they “rarely” or “never” discuss it (65%).

When faced with something that will dramatically impact our civilisation and has the potential to disrupt the lives of literally billions of people, then there is wide agreement ….

Over half of Americans (58%) understand that global warming is mostly human-caused.

About six in ten Americans (62%) say they are at least “somewhat worried” about global warming.

Six in ten Americans are “interested” in global warming (62%).

… yet they don’t talk about it.

We are avoiding the topic and we are not doing enough to actually address the topic.

It is in our psychology to handle huge challenges like this. When faced with something that we consider to be too big a problem for us to handle as an individual, we simply avoid it and don’t talk about it.

So what can we do that is meaningful?

Psychologist Michael Smyer writes in Scientific American about this and has the following suggestions to break this cycle.I like his suggestions, so here they are …

Get More Information – steps you can take

First, start where you are and get more information. The Nature Conservancy provides a carbon footprint calculator to assess your current carbon habits. The Union of Concerned Scientists provides information about global warming’s impacts and actions we can take, including their top 10 ways to reduce your carbon emissions and save money at the same time.

Realise it’s not just you, we are in this together

Second, realize you’re not alone and find others who share your concerns. A good place to start is the Climate Advocacy Lab and its interactive map that allows you to see public opinion polling on climate issues at the national, state, county, and congressional district level.

Because climate change permeates all aspects of our lives, it’s easy to find an organization that mirrors your own passions. Risky Business applies risk management to the health and economic effects of climate change. Blessed Tomorrow works with religious and denominational leaders to move ahead on climate change based on moral and theological beliefs. Elders Climate Action taps into the large and growing resource of older adults who are concerned about climate change.

Reach out – especially (I would add) to the next generation

Third, reach out to your circles of influence: family members, friends, neighbors and co-workers. For example, after a Graying Green workshop, residents of a continuing care retirement community reached out to the administration. Together, they developed a program to compost the food waste of the community. They had never thought about it until they got together and asked, “How might we make our community more sustainable?”

Finally, commit to one next step and tell someone else about it. Whether taking shorter showers, getting an energy audit or changing your air filters regularly, telling just one other person about it improves the odds of actually following through on the commitment. It also breaks the climate change avoidance habit.

The point is this – small steps by all of us add up – you really can make a difference.

It really is a win-win scenario.

Below are the top 10 steps via the Union of Concerned Scientists. 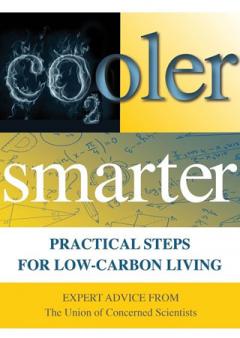 Well OK, they have one more …

Spread the word. If all Americans reduced their emissions by 20 percent we could shutter 200 of the nation’s 600 coal plants, a great step in fighting the worst consequences of climate change.

Many people accept the reality of global warming but don’t want to deal with it. How can we avoid climate avoidance? https://t.co/pRVGAMgk3b pic.twitter.com/Tiz6Izwrbe