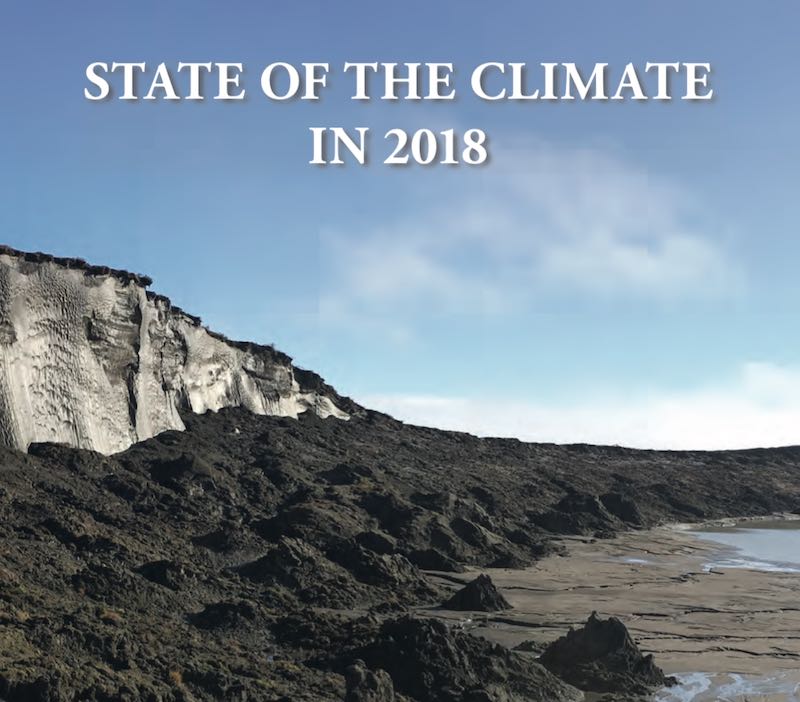 Since about 1996, the American Meteorological Society has published an annual “State of the Climate”. This is an authoritative annual summary of the global climate that is published as a supplement to the Bulletin of the American Meteorological Society. The latest update was just published on 8th August 2019 and is now available. (Yes the date on the cover is 9th September 2019, but 8th Aug is when it was made available).

This update confirms that Global Warming is a complete hoax and so they have apologised for getting it all so wrong in previous editions. Nah, just kidding.

What it actually tells us is exactly what you might anticipate. This is because it is a highly reputable 325 page report that is a composite of solid evidence-based scientific information from over 475 scientific authors, plus 21 editors, all from 57 countries.

In 2018, the dominant greenhouse gases released into Earth’s atmosphere—carbon dioxide, methane, and nitrous oxide—continued their increase. The annual global average carbon dioxide concentration at Earth’s surface was 407.4 ± 0.1 ppm, the highest in the modern instrumental record and in ice core records dating back 800 000 years. Combined, greenhouse gases and several halogenated gases contribute just over 3 W m−2 to radiative forcing and represent a nearly 43% increase since 1990. Carbon dioxide is responsible for about 65% of this radiative forcing.

US Government shutdown might have greatly disrupted this report

Within the introduction they make reference to what happened as follows …

We routinely express our respect and gratitude for the dedication of the authors and editors to thoroughly and rigorously document the state of the climate system. This year, many U.S. government scientists, and those dependent on U.S. government data, re-prioritized their post-furlough activities to reduce disruption to the report’s contents and schedule. Thanks to their dedication, and the generous expanded support from those who were able to contribute during the episode, we were able to produce the report roughly on schedule and with the apparent loss of only one section.

Put simply, we will remember this edition, as ever, for the value of the many scientific contributions. But perhaps more so for the depth of professional gener- osity built into this series.

In other words, when faced with no pay and being stood down, many simply kept working anyway, or instead maintained a tight focus once they were back to keep things on schedule.

You can access the full report here via this link.

State of the Climate Tweets