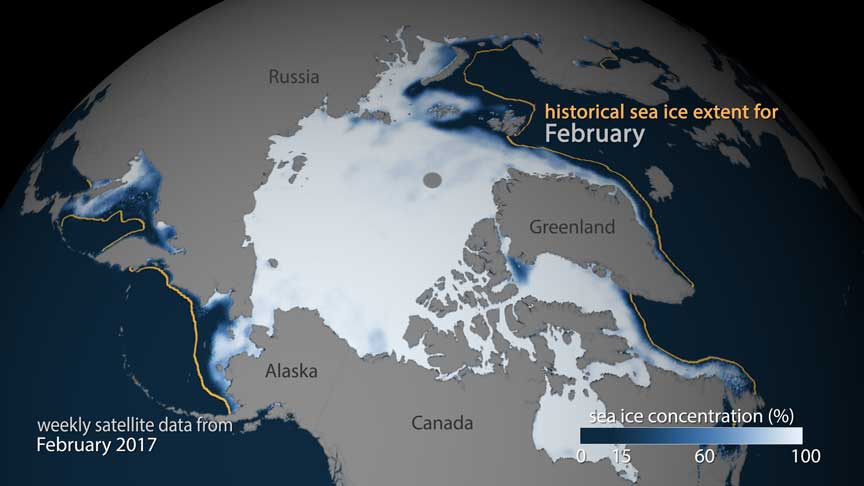 Bryan Thomas, who works as station chief at NOAA’s Point Barrow, Alaska, observatory is deeply troubled. As he sits within his office there in Alaska, he can look North out over the Arctic ocean in the middle of February. It should all be sea ice, but it is not …

“I could see what’s known as water-skyoffsite link — the reflection of dark water on clouds on the horizon,” Thomas said. “From land, you can maybe see 10 miles, and the clouds were telling us that somewhere in that distance there was open water.”

“Here we are in February, when we expect maximum sea ice extentoffsite link,” Thomas added. “This might be all we’re going to get.”

This is not Normal

The Arctic Data is now at record breaking lows

The repeated surges of warm air moving into the Arctic over the past few months is quite frankly astonishing, this has been slowing down the normal winter sea ice growth.

The 2017 Melt Season will soon commence

Will 2017 set a record for the least amount of sea ice ever recorded at winter’s end?

We are not there yet, but given the observations made so far, that is clearly how things will pan out.

It is not just the Arctic

This winter was cold by today’s climate standards, By historic standards, it was completely uninteresting. I’m ready to say beyond any doubt that interior Alaska simply does not experience the temperatures it did in the past.

It is all happening really fast …

“We knew the Arctic would be the place we’d see the effects of climate change first, but what’s happened over the last couple of years has rattled the science community to its core, Things are happening so fast, we’re having trouble keeping up with it. We’ve never seen anything like this before.”

Watch “Animals of the Ice” from NOAA Ocean Today. Below is one of the many clips you will find at that link …