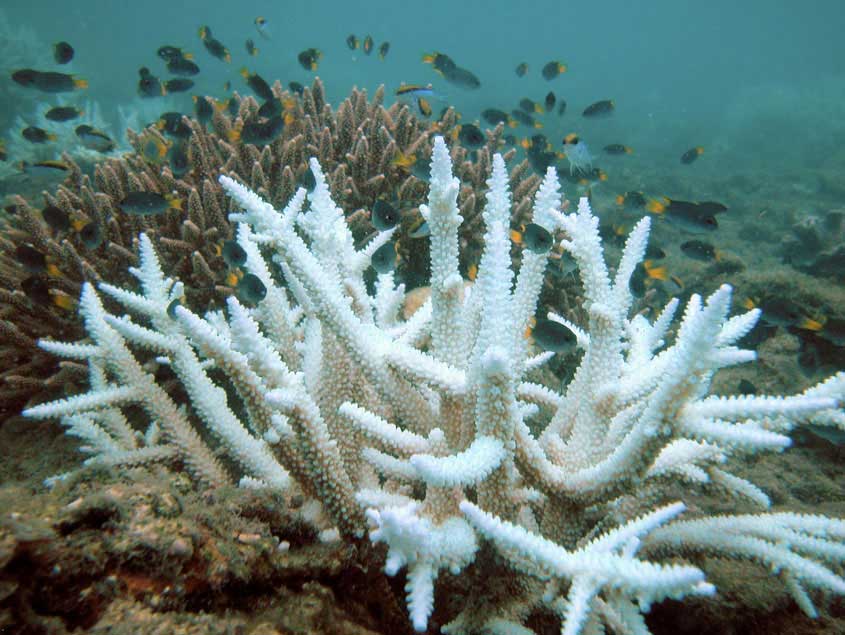 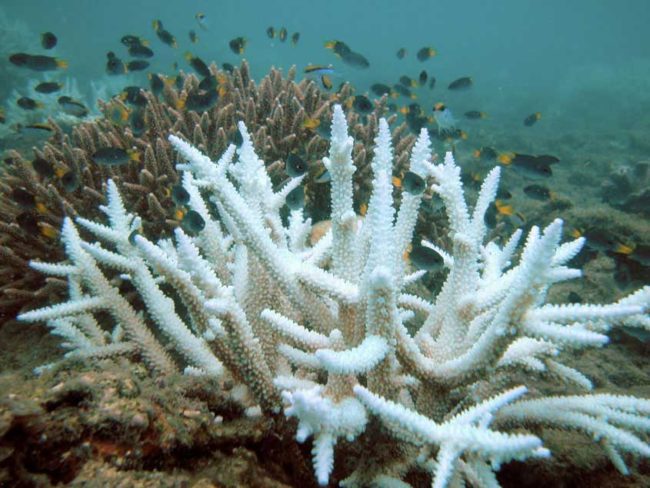 The largest coral structure in the world, the Great Barrier Reef which is roughly about 1,400 miles long, is experiencing yet another major bleaching event.

Recent major bleaching events have happened in 1998, a dramatic El Nino year, 2002, and also last year in 2016. Since 2016 was also an El Nino year, there was a suggestion by some that it was due to El Nino and not climate change.

2017 has also now witnessed another major bleaching event and so this is happening in a non El Nino year and also in a consecutive year. The root cause is clearly climate change.

What is Coral Bleaching?

Basically what is going on is that Coral has a symbiotic relationship with algae-like unicellular organisms. It is specifically Zooxanthellae that gives coral its coloration. When the coral comes under stress due to variations in the sea temperature that causes it to become too hot or too cold, the coral responds by ejecting the zooxanthellae, thus they turn white and so become bleached.

In other words, bleaching means that it will probably die, so there will be a need to survey later to see what has actually happened.

The folks on the ground are the Australian ARC Centre of Excellence for Coral Reef Studies. On 10th April (yesterday) they issued the following …

For the second time in just 12 months, scientists have recorded severe coral bleaching across huge tracts of the Great Barrier Reef after completing aerial surveys along its entire length. In 2016, bleaching was most severe in the northern third of the Reef, while one year on, the middle third has experienced the most intense coral bleaching.

“The combined impact of this back-to-back bleaching stretches for 1,500 km (900 miles), leaving only the southern third unscathed,” says Prof. Terry Hughes, Director of the ARC Centre of Excellence for Coral Reef Studies, who undertook the aerial surveys in both 2016 and 2017.

“The bleaching is caused by record-breaking temperatures driven by global warming. This year, 2017, we are seeing mass bleaching, even without the assistance of El Niño conditions.”

Dr. James Kerry, who also undertook the aerial surveys, explains further, “this is the fourth time the Great Barrier Reef has bleached severely – in 1998, 2002, 2016, and now in 2017. Bleached corals are not necessarily dead corals, but in the severe central region we anticipate high levels of coral loss.”

“It takes at least a decade for a full recovery of even the fastest growing corals, so mass bleaching events 12 months apart offers zero prospect of recovery for reefs that were damaged in 2016.”

They have also provided the following comparison …

“Last year we lost 67 percent on average of the corals in the northern 700 kilometers (430 miles) of the barrier reef, between March and October, We’re likely to see something similar happen now in the middle third this year.”

“That’s obviously an enormous loss over two-thirds of the Great Barrier Reef, I wouldn’t say the barrier reef is dying. But clearly, we’re measuring serious losses here. And the reason it’s happening is global warming.”

I showed the results of aerial surveys of #bleaching on the #GreatBarrierReef to my students, And then we wept. pic.twitter.com/bry5cMmzdn

I don't know how much longer the #GreatBarrierReef has without COP21 +1.5C, and it saddens me deeply that people need to ask the question… https://t.co/Z7c6vgfS6D

Without doubt the most confronting research project I've ever done. Please act NOW to save the #GreatBarrierReef from climate change. pic.twitter.com/rVujRxoPeD

The ARC Centre of Excellence for Coral Reef Studies – @CoralCoE

Interactive map of images and video of aerial survey footage from the 2016 #GBR bleaching event: https://t.co/suW9aquTHX

In the six months following the peak of bleaching in March 2016, scientists measured on average 67% loss of corals in the northern 700 km section of the Great Barrier Reef, which was the worst impacted section in that year. An interactive map of images and video of aerial survey footage from the 2016 event can be found here.

The aerial survey techniques used in this study were employed consistently in all four bleaching events on the Great Barrier Reef: 1998, 2002, 2016 and 2017. They were backed up by extensive in-water research during the 2016 event and published in the peer-reviewed journal, Nature. (Link to journal)

The website of the ARC Centre of Excellence for Coral Reef Studies is here.