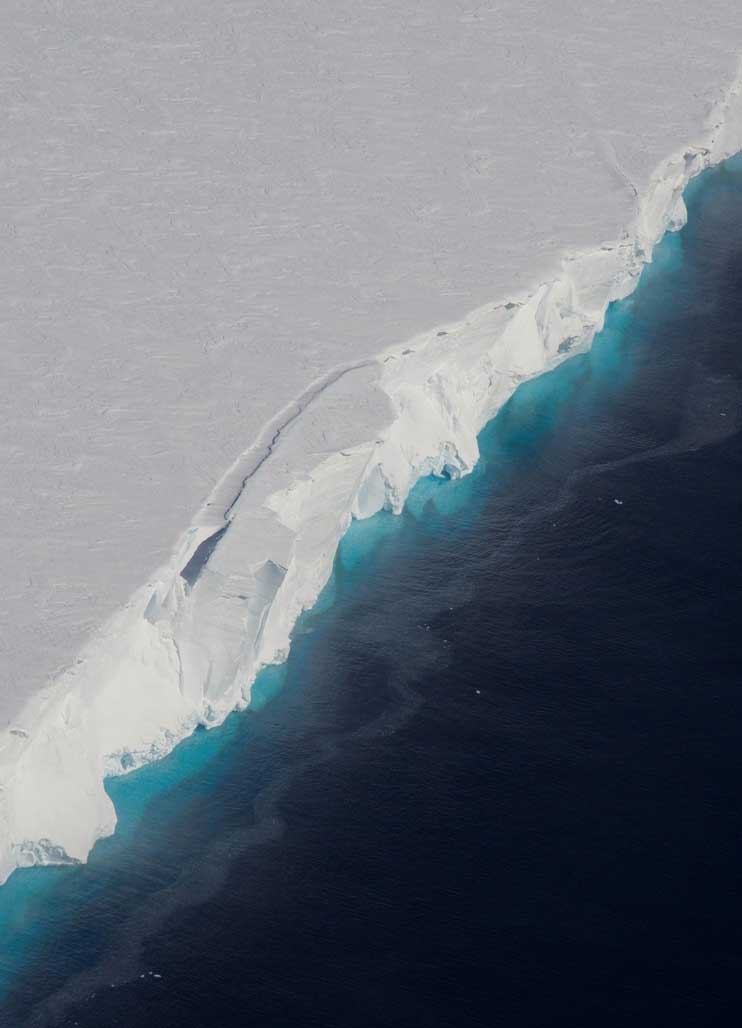 The Thwaites Glacier in Antarctica is not simply some far away place of scientific interest, but instead has become the focus of the biggest ever Antarctic field campaign. It has become apparent that what is happening there right now has the potential to greatly impact us … soon. Because of the risk, the biggest ever joint UK-US research programme has been launched to find out what is going on.

They are spending tens of millions to send over 100 scientists to one of the most remote inaccessible regions on the planet.

There is a huge degree of urgency about all of this.

What is the Risk?

The fear is that the Thwaites Glacier in Antarctica could collapse within decades leading to a global rise of sea levels of as much as 10 feet.

What is already known is pointing to this being a very distinct possibility.

It is already showing signs of stress and appears to have destabilised.

The unique problem with Thwaites is that as it retreats, the ocean behind it gets deeper. Once it starts to retreat there is nothing holding it back and the retreat will become faster and faster all the way to the South pole.

To goal of the mission is to find out what is going on, and how fast the retreat will be.

What happens right now will be the planning and setup of it all to get people out there on the ice and in ships to gather data over several seasons. We are most probably about 4 or 5 years aways from knowing the answers and understanding the impact. 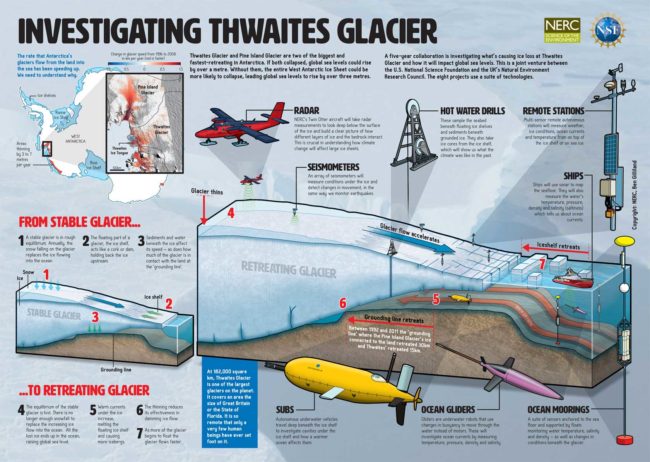 “Rising sea levels are a globally important issue which cannot be tackled by one country alone. The Thwaites Glacier already contributes to rising sea levels and understanding its likely collapse in the coming century is vitally important. Science, research and innovation is at the heart of our industrial strategy and this UK-US research programme will be the biggest field campaign of its type ever mounted by these countries. I’m delighted that our world-leading scientists will help leading this work.”

“The fate of the Thwaites Glacier is one the big unknowns in Antarctic science. We currently do not know enough about the likelihood, timing and magnitude of the collapse of West Antarctic glaciers such as Thwaites for countries to be able to plan accordingly. NERC and NSF, working together, are uniquely placed to attempt to reduce the scientific uncertainty about these unknowns, providing answers to one of the most important questions facing us about global sea-level rise.”

“Satellites show the Thwaites region is changing rapidly, but to answer the key questions of how much, and how quickly sea level will change in the future requires scientists on the ground with sophisticated equipment collecting the data we need to measure rates of ice-volume, or ice-mass change. The challenges of conducting fieldwork of this scope and scale in such remote locations are enormous. The only practical way for nations to do this is to work collaboratively, each bringing their resources, both scientific and logistical, to enable complex and comprehensive field studies.”

“The US Antarctic Program has decades of experience in supporting large-scale international research initiatives – from building the world’s largest neutrino detector at the South Pole to supporting ice-core and sediment drilling projects that provided glimpses into the thawing and freezing of Antarctica over timescales of millions of years. I am fully confident that we will rise to the challenge of supporting these projects just as well.”

“Whilst Antarctica seems far away, what is happening there is already affecting sea levels around the world. UK and US scientists have a track record of working well together on the ice, and together we have a unique opportunity to change our understanding of Antarctica, and to make a difference by helping to provide the information we need to help protect coastal cities, ecosystems and vulnerable communities around the world.”

“For more than a decade, satellites have identified this area as a region of massive ice loss and rapid change. But there are still many aspects of the ice and ocean that cannot be determined from space. We need to go there, with a robust scientific plan of activity, and learn more about how this area is changing in detail, so we can reduce the uncertainty of what might happen in the future.”

The huge Thwaites Glacier on Antarctica's Amundsen Sea is melting incredibly rapidly. This matters, because that single glacier is responsible for 4% of the annual global sea level rise.
Can it be stopped? How much time do we have?https://t.co/A16xxZt8vs

1. I wanted to add some additional notes this morning on why it is such a big deal that the U.S. and UK are jointly spending tens of millions to send some 100 scientists – and Boaty McBoatface! — to study Thwaites glacier, Antarctica. https://t.co/h2q2Wa1Osi pic.twitter.com/FVyLOlwnBh

Is Thwaites Glacier on the verge of irreversible retreat? – we need more data. Satellite records show Thwaites has increased in speed, currently flowing at over 4km/yr; its ice is thinning rapidly (40cm/yr) and its grounding line is retreating by 400m/yr, pic NASA/GSFC/SVS pic.twitter.com/HyITcMyml1

Antarctica: The Thwaites Glacier, about the size of Britain, is melting and in rapid retreat, accounting for 4% of global sea-level rise.

Scientists are now looking into whether it could collapse and push up the oceans by 80cm or morehttps://t.co/yxSYiSh19V #climate pic.twitter.com/4Q63ansy68