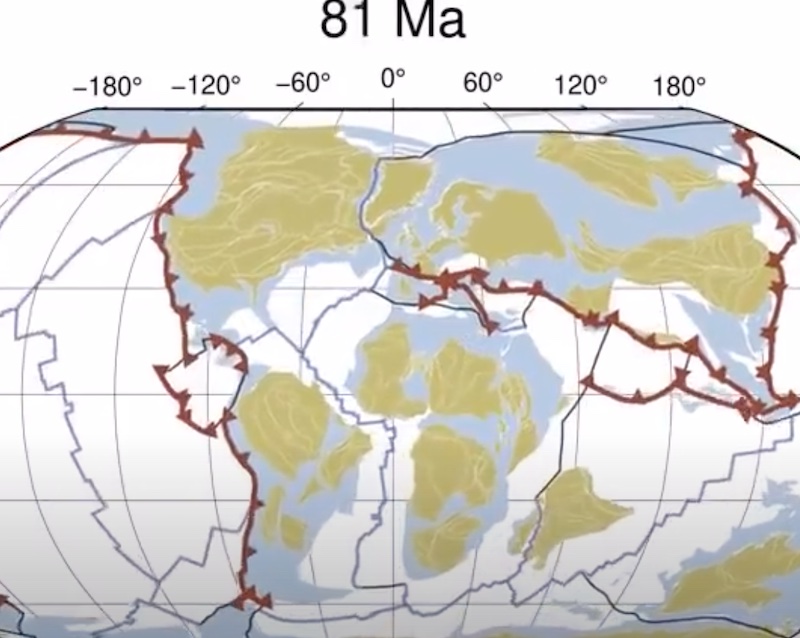 Geoscientists have released a video. For the first time it shows the uninterrupted movement of the Earth’s tectonic plates over the past billion years.

Before we get into the story behind this, here it is …

The truly fascinating observation is just how much change there has been. The configuration we are all familiar with is only recent. For many, that is perhaps the big surprise here.

Let’s dig into the details.

It has been composed by an international group of Geoscientists.

You have heard “Follow the money”, and so, who paid for this research?

As you can see below, the following organisations did. It reveals that this truly is in international scientific endeavour …

Is this flow of Tectonic Plates just a guess?

The full details have been published within the peer-reviewed journal, Earth-Science Reviews. It is long and very very complex. All the details are there.

It is also perhaps worth stressing that the reconstruction is a starting point and not the final definitive end-game understanding. It uses all the available data, but inevitably, it is a conversation starter within the community of subject matter experts. Over time, others will make their own contributions that will refine this model. Richer better data that we don’t yet have will of course also lead to change.

The study paper is titled “Extending full-plate tectonic models into deep time: Linking the Neoproterozoic and the Phanerozoic“. The abstract introduces it all as follows …

Recent progress in plate tectonic reconstructions has seen models move beyond the classical idea of continental drift by attempting to reconstruct the full evolving configuration of tectonic plates and plate boundaries. A particular problem for the Neoproterozoic and Cambrian is that many existing interpretations of geological and palaeomagnetic data have remained disconnected from younger, better-constrained periods in Earth history. An important test of deep time reconstructions is therefore to demonstrate the continuous kinematic viability of tectonic motions across multiple supercontinent cycles.

We present, for the first time, a continuous full-plate model spanning 1 Ga to the present-day, that includes a revised and improved model for the Neoproterozoic–Cambrian (1000–520 Ma) that connects with models of the Phanerozoic, thereby opening up pre-Gondwana times for quantitative analysis and further regional refinements.

In this contribution, we first summarise methodological approaches to full-plate modelling and review the existing full-plate models in order to select appropriate models that produce a single continuous model. Our model is presented in a palaeomagnetic reference frame, with a newly-derived apparent polar wander path for Gondwana from 540 to 320 Ma, and a global apparent polar wander path from 320 to 0 Ma.

We stress, though while we have used palaeomagnetic data when available, the model is also geologically constrained, based on preserved data from past-plate boundaries. This study is intended as a first step in the direction of a detailed and self-consistent tectonic reconstruction for the last billion years of Earth history, and our model files are released to facilitate community development.

Comments by the researchers involved

There is no escaping the observation that this is perhaps the ultimate jigsaw puzzle. Behind this rests rather a lot of hard graft. While the end-result might on the surface appear to be a 40 second clip, what it actually brings is a solid understanding of the movement of the Earth’s tectonic plates over the past billion years for the first time.

For a bit of context, the understanding behind that 40 second clip took 4 years of effort by the team.

“Our team has created an entirely new model of Earth evolution over the last billion years.

“Our planet is unique in the way that it hosts life. But this is only possible because geological processes, like plate tectonics, provide a planetary life-support system.”

“For the first time a complete model of tectonics has been built, including all the boundaries”

“On a human timescale, things move in centimetres per year, but as we can see from the animation, the continents have been everywhere in time. A place like Antarctica that we see as a cold, icy inhospitable place today, actually was once quite a nice holiday destination at the equator.”

“Planet Earth is incredibly dynamic, with the surface composed of ‘plates’ that constantly jostle each other in a way unique among the known rocky planets. These plates move at the speed fingernails grow, but when a billion years is condensed into 40 seconds a mesmerising dance is revealed.

Co-author Dr Sabin Zahirovic from the University of Sydney

While there are named authors on the paper who assembled this, behind them is a far larger unnamed group of Earth Scientists who have enabled all this by gathering up the foundational data.

Earth scientists from every continent have collected and published data, often from inaccessible and remote regions. It is the very existence of this data that has enabled Dr Andrew Merdith and his collaborators to then assimilate it all over the past four years to produce this billion-year model.

But what does all this really mean?

It will allow scientists to better understand how the interior of the Earth convects, chemically mixes and loses heat via seafloor spreading and volcanism. The model will help scientists understand how climate has changed, how ocean currents altered and how nutrients fluxed from the deep Earth to stimulate biological evolution.

“Simply put, this complete model will help explain how our home, Planet Earth, became habitable for complex creatures. Life on Earth would not exist without plate tectonics. With this new model, we are closer to understanding how this beautiful blue planet became our cradle.”

(The above posting has been composed using materials provided by the University of Sydney).