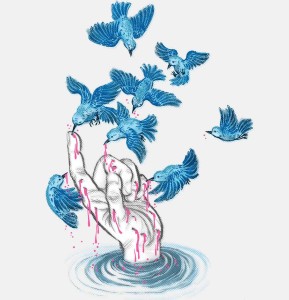 Social media can be quite destructive to those that attempt to utilize it as a weapon and can often have unintended consequences.

Wired has a very interesting article that gives a great example of this. It opens by explaining a sequence of events that took place at a conference …

Earlier this year, at a tech conference called PyCon, the consultant Adria Richards overheard some indelicate puns — involving the terms “dongles” and “forking” — from a couple of male attendees sitting behind her. The jokes made Richards uncomfortable, so in the heat of the moment she decided to register her displeasure by tweeting a picture of the two guys, calling their behavior “not cool.”

I get it … lone female in what was essentially a male domain (80%) hears sexist remarks and she is pissed about it. However, what happens next is the real issue …

The two men were social-media nobodies, whereas Richards had more than 9,000 Twitter followers, some highly connected in the tech world. Her grievance quickly received more than 100 retweets and press coverage that stretched from The Washington Post to MSNBC.

Yikes .. so essentially a private quip between two buddies is in the spotlight and then …

One of the men was recognized by his employer and lost his job.

Is that the outcome she actually desired, a chap with three kids and a job he liked gets fired … I suspect not, but because it went that far it had repercussions, the fact that the guy lost his job pissed off a lot of people, so …

The backlash against his firing then triggered a massive onslaught of online abuse against Richards, who also got fired.

The internet is indeed something many have yet to come to terms with and so it will often bite (or is that byte) us in most unexpected ways with outcomes that can destroy lives. What it does do very well is to amplify a quiet private whisper, but only if you permit it to do so.

Use it wisely and it is a powerful tool that can indeed shame those who indulge in inappropriate behaviour … intolerance, racism, homophobia, or even violence… but used foolishly and it can be a very blunt instrument of destruction. Tweet or post with care, because you are not simply communicating with a few close friends, there are some out there that have millions of followers on twitter, and thousands of friends on Facebook, so things can rapidly cascade way beyond the initial intent.

When some 14 year old kid says something daft or even racist on twitter (you never said anything daft when you were that age .. right … you were perfect), and you then opt to shame him or her, does that then in fact make you a bully because you have is essence deployed a considerable degree of excessive force.

What is clear is that we have yet to truly come to terms with the new media and the power it wields. It has changed us and will continue to do so in most unexpected ways.

There is a balance to be struck here, one that needs to be made with a clear understanding. There are indeed some truly obnoxious fools out there who promote hate, and disinformation … I mean the fully grown adults who are not simply indulging in a foolish remark, but are openly and consistently promoting ideas that deserve ridicule and criticism, and even when presented with appropriate rebuttals that debunk the daftness, they persist with the hate and disinformation … they truly do deserve the full social-media nuclear option.

But as for others … well consider this, would you really want every stupid thing you have ever said or done printed on the front page of the Washington Post … and that’s the point, the golden rule still prevails; treat others in exactly the same manner you also wish to be treated, and strive to get the balance right.