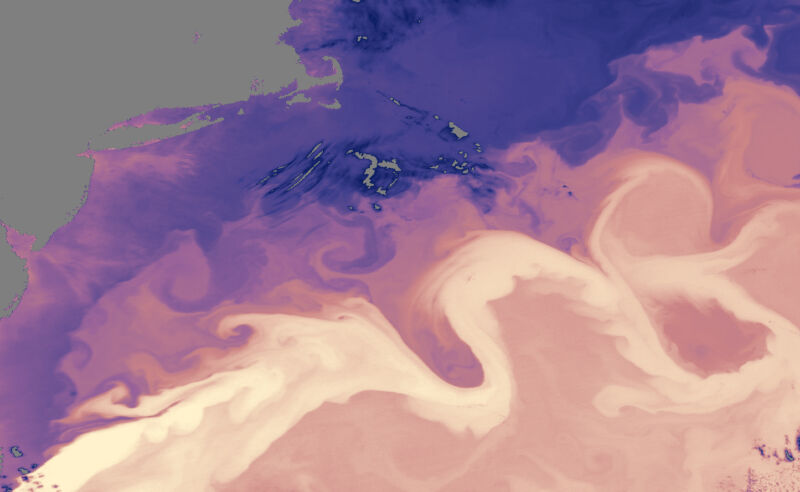 Last week I was writing about a Gulf Stream tipping point that had been revealed by a team of Danish researchers. They published their research within PNAS- “Study: Gulf Stream Collapse is a possibility“. Today I have the details of a different study published within Nature Geoscience.

This new study by an international team from the UK, Germany, and Ireland, reveals that the Gulf Stream is is indeed slowing down.

Key points from this new study:

There is a Press Release

Below is the press release put out by Maynooth University, Ireland …

Gulf Stream System at its weakest in over a millennium

A new study by scientists from Ireland, Britain and Germany has found that the Gulf Stream System, also known as the Atlantic Meridional Overturning Circulation (AMOC), is at its weakest in over a millennium.

They found consistent evidence that its slowdown in the 20th century is unprecedented in the past millennium – it is likely linked to human-caused climate change. The giant ocean circulation has an impact on the climate of Ireland, Britain, and the whole of northwestern Europe; its slowdown is also associated with an observed ‘cold blob’ in the North Atlantic.

“The Gulf Stream System works like a giant conveyor belt, carrying warm surface water from the equator up north, and sending cold, low-salinity deep water back down south. It moves nearly 20 million cubic meters of water per second, almost a hundred times the Amazon flow,”

Prof Stefan Rahmstorf from the Potsdam Institute for Climate Impact Research (PIK), initiator of the study to be published in Nature Geoscience.

Previous studies by Prof Rahmstorf and colleagues showed a slowdown of the ocean current of about 15 percent since the mid of the 20th century, linking this to human-caused global warming, but a robust picture about its long-term development has up to now been missing: This is what the researchers provide with their review of results of proxy data studies.

“Instead of relying just on one data set, we used a combination of several different and largely independent proxy indicators to reconstruct the evolution of the AMOC over the past 1600 years,”

Together these data indicate that the AMOC has been relatively stable until the late 19th century. With the end of the little ice age in about 1850, the system of ocean currents began to decline, with a second, more drastic decline following since the mid-20th century.

Already the 2019 special report on the oceans of the Intergovernmental Panel on Climate Change (IPCC) concluded with medium confidence ‘that the Atlantic Meridional Overturning Circulation (AMOC) has weakened relative to 1850–1900.’

“The new study provides further independent evidence for this conclusion and puts it into a longer-term paleoclimatic context,”

From temperature to flow speed changes: the art of reconstructing past climate changes

Because long-term direct AMOC measurements only started in 2004, the researchers applied an indirect approach, using so-called proxy data, to find out more about the long-term perspective of its decline. Proxy data, as witnesses of the past, consist of information gathered from natural environmental archives such as tree rings, ice cores, ocean sediments, and corals, as well as from historical data for instance from ship logs.

“We used a combination of three different types of data to obtain information about the ocean currents: temperature patterns in the Atlantic Ocean, subsurface water mass properties and deep-sea sediment grain sizes, dating back from 100 to ca. 1600 years. While the individual proxy data is imperfect in representing the AMOC evolution, the combination of them revealed a robust picture of the overturning circulation,”

Dr Caesar, who is now a member of the A4 project working group at ICARUS Climate Research Centre, Maynooth University.

The A4 project (Aigéin, Aeráid, agus athrú Atlantaigh = Oceans, Climate, and Atlantic Change) studies how changes in the Atlantic impact Ireland and northwestern Europe through e.g. changes in ocean circulation and sea level and works on developing predictive capacity for these regions. The A4 project is carried out with the support of the Marine Institute under the Marine Research Programme funded by the Irish Government.

As proxy records in general are subject to uncertainties, statistician Dr Niamh Cahill, of the Hamilton Institute, Maynooth University in Ireland, tested the robustness of the results in consideration of these. She found that in nine of the 11 data sets considered, the modern AMOC weakness is statistically significant.

“Assuming that the processes measured in proxy records reflect changes in AMOC, they provide a consistent picture, despite the different locations and time scales represented in the data. The AMOC has weakened unprecedentedly in over 1000 years,”

Why is the AMOC slowing down?

An AMOC slowdown has long been predicted by climate models as a response to global warming caused by greenhouse gases – according to a number of studies, this is likely the reason for the observed weakening. A key process driving the Atlantic overturning is what scientists call deep water formation, triggered by the differences in the density of the ocean water: Warm and salty water moves from the south to the north where it cools down and thus gets denser. When it is heavy enough the water sinks to deeper ocean layers and flows back to the south. Under global warming freshwater fluxes from sea ice reduction, Greenland Ice Sheet runoff, and increased precipitation as well as enhanced buoyancy from local surface warming are diluting the waters of the northern Atlantic by making the surface ocean warmer and fresher, which means it is less dense. This inhibits the deep water formation and thus weakens the flow of the AMOC.

The weakening has also been linked to a unique substantial cooling of the subpolar North Atlantic over the past hundred years. This so-called ‘cold blob’ was predicted by climate models as a result of a weakening AMOC, which transports less heat into this region.

The consequences of the AMOC slowdown could be manifold for people living on both sides of the Atlantic, as Dr Caesar explains:

“The northward surface flow of the AMOC leads to a deflection of water masses to the right, away from the US east coast. This is due to Earth’s rotation that diverts moving objects such as currents to the right in the northern hemisphere and to the left in the southern hemisphere. As the current slows down, this effect weakens and more water can pile up at the US east coast, leading to an enhanced sea level rise.”

In Europe, a further slowdown of the AMOC could imply more extreme weather events like a change of the winter storm track coming off the Atlantic, possibly intensifying them.

Other studies found possible consequences being extreme heat waves or a decrease in summer rainfall. Exactly what the further consequences are is the subject of current research. Paleoclimatogist Dr David Thornalley, a co-author of the study at University College London, suggests that future work also aims to resolve which components and pathways of the AMOC have changed, how, and for what reasons.

“If we continue to drive global warming, the Gulf Stream System will weaken further — by 34 to 45 percent by 2100 according to the latest generation of climate models,”

“This could bring us dangerously close to the tipping point at which the flow becomes unstable.”