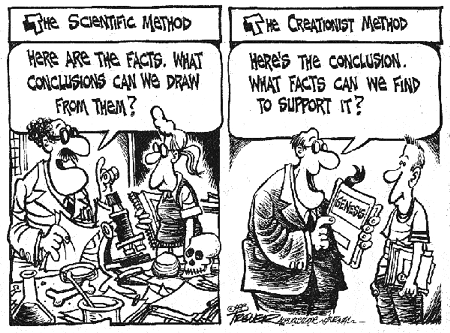 A Mr Saletan has written an article in Slate within which he makes the rather odd claim that you can be a good scientist and also believe in young-Earth creationism at the same time.

This claim is rather at odds with the concept of science, and is perhaps akin to perhaps claiming that you have a really good friend who is a damn fine biologist and who also happens to truly believe that fairies and wood sprites are completely real. If true, then you clearly do not have a “damn fine” biologist as a friend at all, but rather you have a complete and utter kook on your hands.

Anyway, let’s try to suspend judgement, step back and review the argument within this mash of words.

He starts with this …

Let’s start with where we agree. First, creationism isn’t a scientific theory. It fails basic tests of coherence and hypothesis testing. So it shouldn’t be taught in schools. Second, there are some jobs you can’t do while clinging to creation myths.

OK, I’m with him on this so far, but he then starts to slip away and ends with this …

So is the claim that you can’t practice good science while being a creationist. These hypotheses are much beloved among liberals, atheists, and scientists. But the facts are opposed to them. Give them up

Er wait a second, exactly what “facts” did he use to jump from his opening to that conclusion … lets take a look …


So in the end his “evidence” is that there are a few “engineers” who are also kooks, but as you read you will find exactly zero evidence of individuals who in all honesty practise the scientific method, so essentially the evidence that draws him to this conclusion is zero.

Yes, smart people can indeed truly embrace crazy ideas, but to claim that you can practise the scientific method while embracing young earth creationism is simply not a credible claim. Creationist “science” is in fact pseudo-science that masquerades as the real thing but is missing something. In fact I believe Richard Feynman nailed it within his rather famous Caltech commencement address that he gave in 1974 …

In the South Seas there is a cargo cult of people. During the war they saw airplanes with lots of good materials, and they want the same thing to happen now. So they’ve arranged to make things like runways, to put fires along the sides of the runways, to make a wooden hut for a man to sit in, with two wooden pieces on his head to headphones and bars of bamboo sticking out like antennas–he’s the controller–and they wait for the airplanes to land. They’re doing everything right. The form is perfect. It looks exactly the way it looked before. But it doesn’t work. No airplanes land. So I call these things cargo cult science, because they follow all the apparent precepts and forms of scientific investigation, but they’re missing something essential, because the planes don’t land.

He then goes on to explain what is missing …

Now it behooves me, of course, to tell you what they’re missing. But it would be just about as difficult to explain to the South Sea islanders how they have to arrange things so that they get some wealth in their system. It is not something simple like telling them how to improve the shapes of the earphones. But there is one feature I notice that is generally missing in cargo cult science. That is the idea that we all hope you have learned in studying science in school–we never say explicitly what this is, but just hope that you catch on by all the examples of scientific investigation. It is interesting, therefore, to bring it out now and speak of it explicitly. It’s a kind of scientific integrity, a principle of scientific thought that corresponds to a kind of utter honesty–a kind of leaning over backwards. For example, if you’re doing an experiment, you should report everything that you think might make it invalid–not only what you think is right about it: other causes that could possibly explain your results; and things you thought of that you’ve eliminated by some other experiment, and how they worked–to make sure the other fellow can tell they have been eliminated.

… and that is it, that is what those that embrace creationism are missing. You see, the rather fundamental problem with creationism is this …

… and so embracing an idea that has no evidence at all is to in effect demonstrate a complete lack of any scientific integrity.

They might indeed be both decent and honourable, and also smart engineers, but they are not doing science.