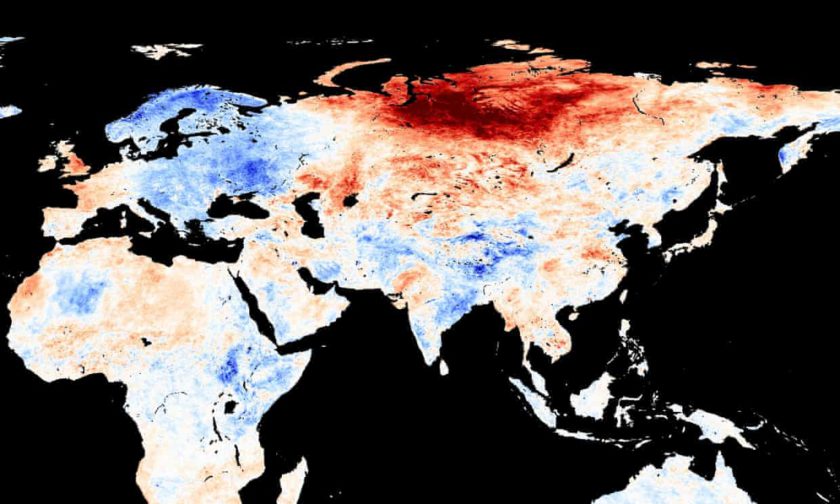 You may have seen media stories reporting on the heatwave is Siberia and sarcastically thought something along the lines of “Are warm days in summer now news?“, then perhaps dismissed it.

Hit pause and take a closer look. What has happened is not normal, it is an unprecedented record-breaking heatwave. Russian towns within the Arctic circle have been reporting jaw-dropping temperatures …

Or how about this …

Do you remember that story about the Russian oil spill? Did you perhaps assume that is was simply an accident?

What happened there is all part of this heatwave story. The oil was being held in a storage tank near the town of near Norilsk in Siberia. Because of the unprecedented heat, melting permafrost undermined it and the storage tank then collapsed, releasing all the oil. About 21,000 tonnes have contaminated the Ambarnaya river and surrounding subsoil.

“We can see a large concentration of diluted oil products beyond the booms,” she said.

There had been warnings.

A 2017 report to the Arctic Council, an international forum which includes Russia, warned that because of global warming and melting ice, foundations in permafrost regions could no longer support the loads they did as recently as the 1980s.

What should now be of extreme concern is that there are entire cities in the region that are built upon the permafrost.

Last year there were massive wildfires in Siberia. At the time back in 2019 it was big news.

Where are we now this year?

As of April 27, ten times the amount of land was on fire in the Krasnoyarsk region compared to the same time last year, The Siberian Times reported. In Transbaikal, meanwhile, three times as much land was burning, and in the Amur region, there were 1.5 times as many fires.

“A critical situation with fires has developed in Siberia and the Far East,” Emergencies Minister Evgeny Zinichev said in a video conference with Russian President Vladimir Putin reported by The Siberian Times.

Is it worth pointing out that we are not yet even into the main wildfire season for the region?

Again, supposedly an isolated story, but this is also related.

This has been reported from the region …

Swarms of the Siberian silk moth, whose larvae eat away at conifer trees in the region’s forests, have grown rapidly amid the rising temperatures.

The moths are usually inactive during winter and eat in spring, summer and autumn periods which are now lengthening.

“In all my long career as a specialist, I’ve never seen moths so huge and growing so quickly,” said Vladimir Soldatov, a moth expert, who warns of “tragic consequences” for forests.

The larvae, which are taking over larger areas of forest, strip trees of their needles and make them more susceptible to forest fires.

The moth “has moved 150 kilometres north compared to its usual territory and that’s because of global warming,” Soldatov told AFP.

It is all part of the bigger picture

“The key point is that the climate is changing and global temperatures are warming,” said Freja Vamborg, senior scientist at the Copernicus Climate Change Service in the U.K. “We will be breaking more and more records as we go.”

“What is clear is that the warming Arctic adds fuel to the warming of the whole planet,” said Waleed Abdalati, a former NASA chief scientist who is now at the University of Colorado.