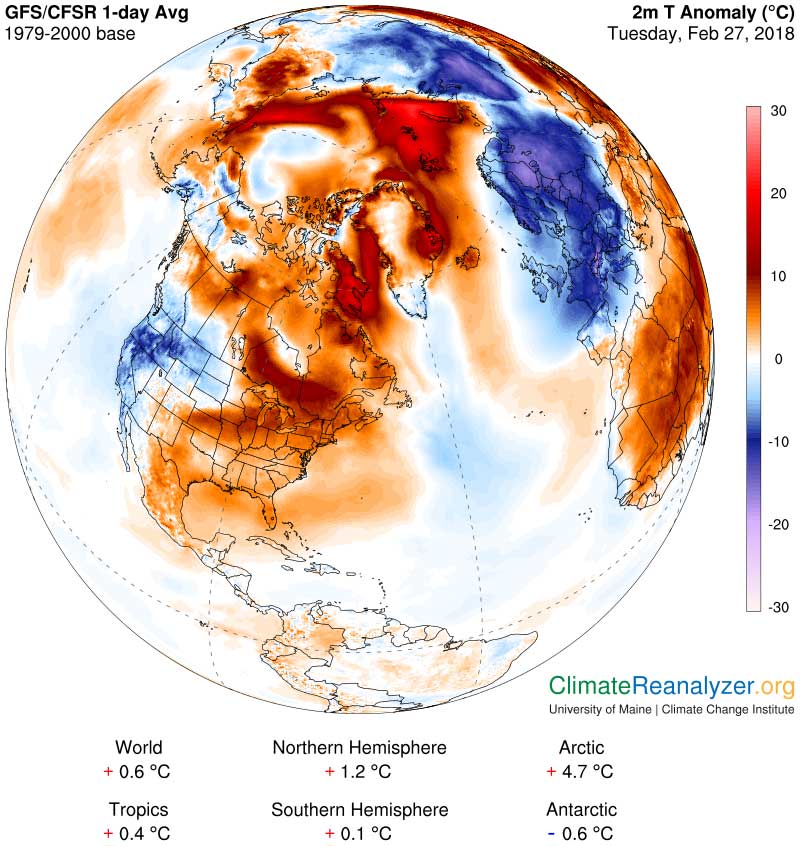 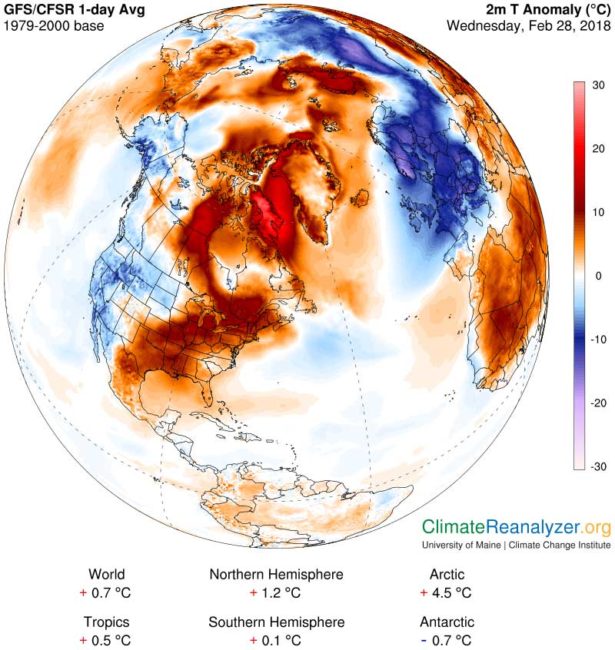 Words such as “Agast” or “stunned” don’t perhaps fully capture it, yet nevertheless we are in the midst of something quite unusual in the Arctic.

Via Zack Labe, a researcher at the University of California at Irvine, and others, we have a series of tweets and graphs that illustrate just how weird things are in the Arctic at the moment …

Another "warm" winter in Svalbard –> mean temperatures were 9.9°C above average in the last 30-days at Longyearbyen (~78°N latitude).

Today's mean temperature was +3.9°C. The climate average for the date is -16.3°C [Climate stats from @Meteorologene at https://t.co/s8yYvPKdyc] pic.twitter.com/tDgbO47NXx

After northern #Greenland over the weekend, the warm air advection shifts further east. Basically all of #Svalbard currently above freezing with strong gales from the south (up to 83 km/h). Longyearbyen currently at +4C (max 4.5C) and 36 hours uninterrupted above freezing. pic.twitter.com/HlF9ziXJp1

The northernmost weather station in Greenland saw temperatures soar above freezing on 9 days this month so far. Sea ice near there disappeared. Unheard of for February. https://t.co/fNVsxxwW1t

Warm spells at North Pole not unheard of, but have become more frequent and longer lasting in recent times. The current event seem pretty extreme though. #NICE2015Arctic https://t.co/bN9HX1EcV6 pic.twitter.com/rbyQ38S4K2

… and there is plenty more where that came from.

But it happens … right?

Yes, there are indeed naturally occurring variations, so you might wonder why scientists are “stunned”.

If you have access to very precise data gathered over all the decades since it has been possible to gather such precise details via satellite, then look and what you see leaves you stunned.

Below is a graph by Zack Lake that illustrates the daily 2 m surface air temperature for the Arctic.

Now take a good long hard look at where we are right now and bask in the observation that right now in 2018, all previous records have been smashed and 2018 is out on it’s own. 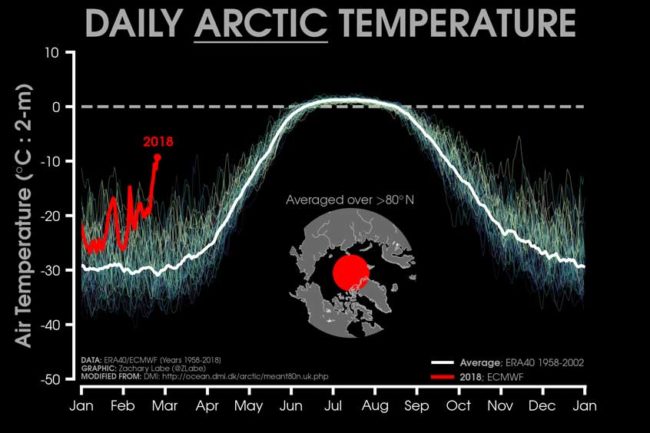 “To have zero degrees at the North Pole in February – it’s just wrong,” said Amelie Meyer, a researcher of ice-ocean interactions with the Norwegian Polar Institute. “It’s quite worrying.”

The so-called Polar Vortex – a zone of persistient low-pressure that typically keeps high-latitude cold air separate from regions further south – has been weakening for decades.

In this instance, “a massive jet of warm air” is penetrating north, sending a cold burst southwards, said Dr Meyer, who has relocated to Hobart to research on the southern hemisphere, and is hosted by Institute for Marine and Antarctic Studies.

“The anomalies are really extreme,” Andrew King, a lecturer in climate science at the University of Melbourne, said. “It’s a very interesting event.”

Warm, moist air is penetrating much further north than it would normally at a time when the North Pole is in complete darkness.

Cape Morris Jessup, the world’s most northerly land-based weather station, in Greenland, touched 6 degrees late on Saturday, about 35 degrees above normal for this time of year.

Robert Rohede, a Zurich-based scientist with Berkeley Earth, posted on Twitter that Cape Morris Jessup had already recorded 61 hours above freezing so far in 2018.

The previous record of such relative was just 16 hours recorded to the end of April in 2011.

“Parts of Greenland are quite a bit warmer than most of Europe,” Dr King said.

.. While researchers had pegged 2050 as a possible year when the Arctic will become ice-free, this winter and the previous one – also unusually warm – had thrown those estimates out.

“It’s going much faster than we thought,” said Dr Meyer, who will begin work later this year at the ARC Centre of Excellence for Climate Extremes.

Meanwhile, where has all that cold air gone?

It appears to have moved south and is sitting over Europe.

Cape Morris Jesup at the northern tip of Greenland just registered a temperature of +6 C (43 F).

Here is a map of the parts of Europe that are currently colder than the northernmost weather station on Earth. pic.twitter.com/8LoJjSxGxL

It all appears to be part of a feedback loop. A rapidly warming arctic leads to disruption in the high altitude jet stream which in turn leads to an increase in the frequency of such “wacky” events.

“wacky” is actually a literal description and not an emotional response

The “Warm Arctic, Cold Continent” (WAC#C) pattern is sometimes dubbed “wacc-y” or “wacky” as a description of the warm air pushing north and shoving the colder air south on top of us.

This is one isolated event, but in the context of the bigger picture over a longer period of time, we have good cause to be greatly concerned.

To be able to see the bigger picture, Robert Rohde, the Lead Scientist @BerkeleyEarth has tweeted out a movie …

Want to see 168 years of climate change in two minutes?

Here is our movie, updated through 2017. pic.twitter.com/ppwXgFPGdA

The northerly warm airflow opened up the sea ice north of Greenland. This large open water area is very unusual. I haven't seen a similar event like this before in the almost 25 years I now work with satellite data. pic.twitter.com/RJcONASaO4