There is a lot of back chatter, excitement and tweets flowing about the probable discovery of Gravitational Waves.

“Hey wait a second, that was announced already“, you might say. True indeed, there was an announcement made on 17 March 2014, but that was withdrawn on 30 January 2015 because further analysis concluded that “the signal can be entirely attributed to dust in the Milky Way”.

This is something quite different, LIGO (The Laser Interferometer Gravitational-Wave Observatory) began making observations last september and it looks like they have got the goods … probably.

My earlier rumor about LIGO has been confirmed by independent sources. Stay tuned! Gravitational waves may have been discovered!! Exciting.

Don’t hold your breath waiting, it will take a bit of time yet before this all becomes official …

The official word from the LIGO team is that they are still analysing the data from the first run, which should finish on 12 January. “It takes time to analyse, interpret and review results,” says spokesperson Gabriela González at Louisiana State University. “We expect to have news on the run results in the next few months.”

It is apparently now news

The Guardian has the story, but they do correctly identify it as a 60% probability right now …

According to the rumours, scientists on the team are in the process of writing up a paper that describes a gravitational wave signal. If such a signal exists and is verified, it would confirm one of the most dramatic predictions of Albert Einstein’s century-old theory of general relativity.

Krauss said he was 60% confident that the rumour was true, but said he would have to see the scientists’ data before drawing any conclusions about whether the signal was genuine or not.

In fact many media outlets are now reporting it …

OK, so what exactly is LIGO and what have they detected?

You can read about Gravitational Waves here, but basically …

As objects with mass move around in spacetime, the curvature changes to reflect the changed locations of those objects. In certain circumstances, accelerating objects generate changes in this curvature, which propagate outwards at the speed of light in a wave-like manner. These propagating phenomena are known as gravitational waves.

… and so LIGO is a setup designed to detect this. In fact it is not one detector, but 3, all located at different places, and so that will give them some good results if they all report the same at the same time. The idea of the detector is to have a light source running two beams, each about 4 Km long and at right angles … like this … 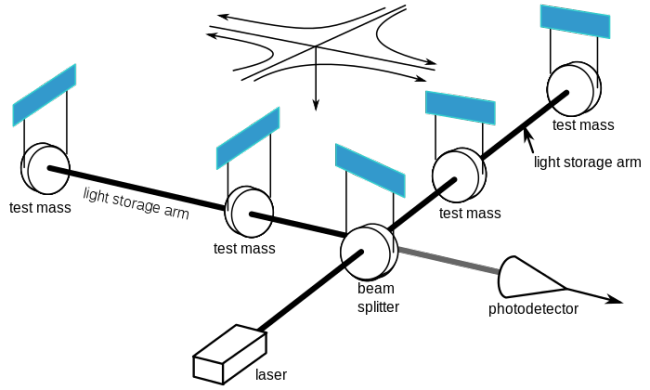 … and what then happens is that as a gravitational wave passes and distorts spacetime, it will ever so slightly shorten one and lengthen the other and that can then be measured and detected.

Once you get the basics right, then you have potentially opened a new window on the universe and so we would be able to start looking beyond the limits imposed currently by the electromagnetic spectrum – and that makes all this very exciting. That would of course require far better detectors and already in anticipation of that there are plans to go space based and occupy a solar orbit trailing the Earth, with each arm of a laser triangle being five million kilometres long.

Apart for the actual discovery itself, which is of course exciting, we now also have something else that is perhaps quite new. The excitement within the scientific community is bubbling away and out in the open because some folks who live and breath life at the cutting edge of science will quite naturally tweet about things like this, and so we all now get to see that happen, and get the hear about it long before the far more formal announcements.