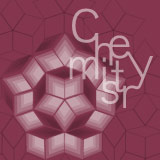 Its Chemistry today. Past winners have included well-known names such as Ernest Rutherford, Marie Curie, and Linus Carl Pauling, so who has won and also why?

The Nobel Prize in Chemistry 2011 was awarded to Dan Shechtman “for the discovery of quasicrystals”. 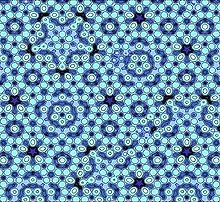 Quasicrystals are structural forms that are ordered but not periodic. They form patterns that fill all the space though they lack translational symmetry. Here is an example to illustrate it. Its the Atomic model of an Ag-Al quasicrystal.

The press release here sums it all up very well.

A remarkable mosaic of atoms

In quasicrystals, we find the fascinating mosaics of the Arabic world reproduced at the level of atoms: regular patterns that never repeat themselves. However, the configuration found in quasicrystals was considered impossible, and Dan Shechtman had to fight a fierce battle against established science. The Nobel Prize in Chemistry 2011 has fundamentally altered how chemists conceive of solid matter.

On the morning of 8 April 1982, an image counter to the laws of nature appeared in Dan Shechtman’s electron microscope. In all solid matter, atoms were believed to be packed inside crystals in symmetrical patterns that were repeated periodically over and over again. For scientists, this repetition was required in order to obtain a crystal.

Shechtman’s image, however, showed that the atoms in his crystal were packed in a pattern that could not be repeated. Such a pattern was considered just as impossible as creating a football using only six-cornered polygons, when a sphere needs both five- and six-cornered polygons. His discovery was extremely controversial. In the course of defending his findings, he was asked to leave his research group. However, his battle eventually forced scientists to reconsider their conception of the very nature of matter.

Aperiodic mosaics, such as those found in the medieval Islamic mosaics of the Alhambra Palace in Spain and the Darb-i Imam Shrine in Iran, have helped scientists understand what quasicrystals look like at the atomic level. In those mosaics, as in quasicrystals, the patterns are regular – they follow mathematical rules – but they never repeat themselves.

When scientists describe Shechtman’s quasicrystals, they use a concept that comes from mathematics and art: the golden ratio. This number had already caught the interest of mathematicians in Ancient Greece, as it often appeared in geometry. In quasicrystals, for instance, the ratio of various distances between atoms is related to the golden mean.