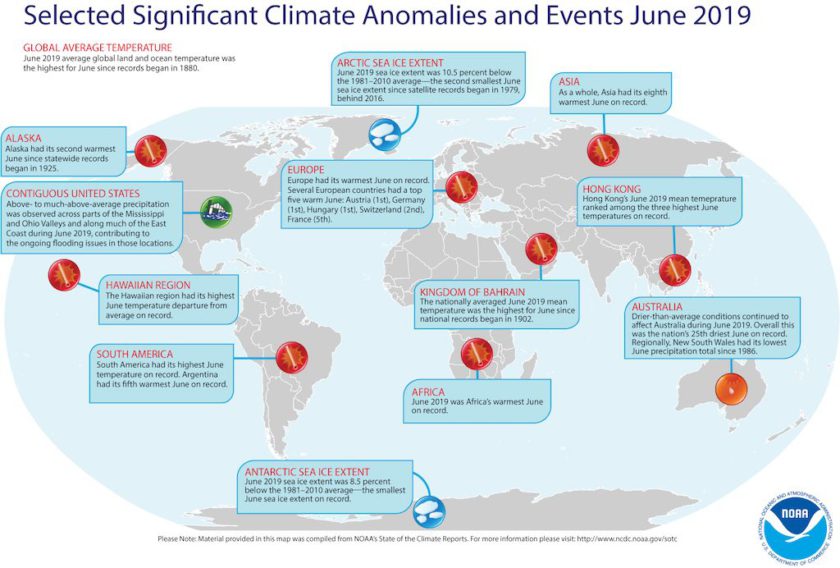 Roughly about the middle of each and every month NOAA publish a Global Climate Report. The June 2019 version has now been published. Once we reach the end of the month it takes until about now to receive all the global data, carefully check it all, then write up the assessment with precise details.

June 2019 has already been reported via other sources to have been the hottest June ever recorded since records began, (see here and also here), hence it it worth stopping by this update and taking a look.

The full NOAAS Global Climate Report not only covers Temperature, but also other aspects. However, the story of the moment is Temperature, so let’s specifically focus down on that.

Overall, here is what has been happening to June on a Global Scale since records began …

But what about El Niño?

El Niño – Southern Oscillation (ENSO) phenomenon, does have a measurable influence on the global climate temperatures. They have a graphic (see below) that depicts the monthly global temperature anomalies—that is, each month compared its 20th century average—since 1980 and it shows you this influence.

There are a few things that are immediately obvious …

NOAA, as do others, do have a view on that. What they have is a little bit more than just a guess. They utilize simulations of possible outcomes based on how widely the global temperature time series has varied from month to month in the historical record. Once they have created plausible scenarios, they then identify the 95% range of most likely outcomes.

Based on current anomalies and historical global annual temperature readings, it appears that it is virtually certain that 2019 will be a top 10 year, consistent with a strong propensity since 1988 for recent years to be initially ranked as a top 10 year. Our calculations suggest: