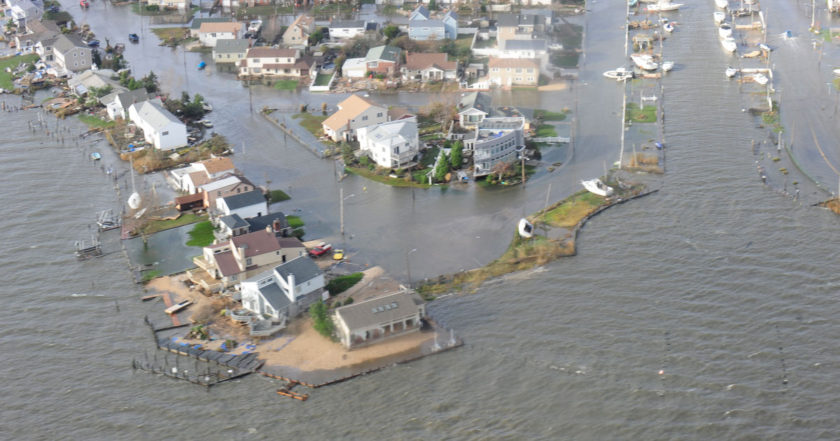 There are devastating flooding events that happen on average about once every human lifetime. A new study conducted by researchers at the University of Illinois at Chicago, the University of Hawai’i, and the U.S. Geological Survey, reveals what is coming. With the acceleration of sea level rise that is going to change.

By about 2100, just 80 years from now, climate change will have turned these once in a lifetime flooding events into daily events.

Side Note: There is no paywall, the above is a link to an Open Access article.

We find that the odds of exceeding critical water-level thresholds increases exponentially with sea-level rise, meaning that fixed amounts of sea-level rise of only ~1–10 cm in areas with a narrow range of present-day extreme water levels can double the odds of flooding.

Combining these growth rates with established sea-level rise projections, we find that the odds of extreme flooding double approximately every 5 years into the future.

Further, we find that the present-day 50-year extreme water level (i.e., 2% annual chance of exceedance, based on historical records) will be exceeded annually before 2050 for most (i.e., 70%) of the coastal regions in the United States.

Looking even farther into the future, the present-day 50-year extreme water level will be exceeded almost every day during peak tide (i.e., daily mean higher high water) before the end of the 21st century for 90% of the U.S. coast.

Our findings underscore the need for immediate planning and adaptation to mitigate the societal impacts of future flooding.

What did the researchers actually do?

Mohsen Taherkhani, Sean Vitousek and colleagues at the U.S. Geological Survey, the University of Illinois at Chicago, and the University of Hawaii, investigated the frequency of extreme water levels measured by 202 tide gauges along the US coastline and combined the data with sea-level rise scenarios to model the rate at which flooding events may increase in the future.

For 73% of the tide gauges used in the study, the difference in water level between the 50-year extreme water level and the daily average highest tide was found to be less than one metre, and most sea-level rise projections exceed one metre by 2100. The authors’ model predicted that before 2050, current extreme water levels transitioned from 50-year, once-in-a-lifetime flooding events to annual events in 70% of US coastal regions. Before the end of 2100, once-in-a-lifetime extremes were predicted to be exceeded almost daily for 93% of the sites measured.

The data suggest that present-day extreme water levels will become commonplace within the next few decades. Low-latitude areas will be the most susceptible, with their rate of coastal flooding predicted to double every five years. At the most susceptible sites, along the Hawaiian and Caribbean coast, the rate at which extreme water levels occur may double with every centimetre of sea-level rise.

Associated coastal hazards, such as beach and cliff erosion, will likely accelerate in concert with the increased risk of flooding, suggest the authors.