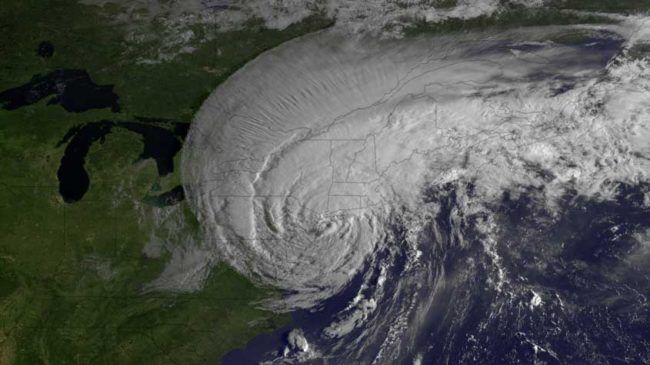 Michael E. Mann, the climatologist and geophysicist famous by the “hockey stick graph” within a 1999 paper, has published a new paper. It is open source and available via Nature …

Persistent episodes of extreme weather in the Northern Hemisphere summer have been shown to be associated with the presence of high-amplitude quasi-stationary atmospheric Rossby waves within a particular wavelength range (zonal wavenumber 6–8). The underlying mechanistic relationship involves the phenomenon of quasi-resonant amplification (QRA) of synoptic-scale waves with that wavenumber range becoming trapped within an effective mid-latitude atmospheric waveguide. Recent work suggests an increase in recent decades in the occurrence of QRA-favorable conditions and associated extreme weather, possibly linked to amplified Arctic warming and thus a climate change influence. Here, we isolate a specific fingerprint in the zonal mean surface temperature profile that is associated with QRA-favorable conditions. State-of-the-art (“CMIP5”) historical climate model simulations subject to anthropogenic forcing display an increase in the projection of this fingerprint that is mirrored in multiple observational surface temperature datasets. Both the models and observations suggest this signal has only recently emerged from the background noise of natural variability.

As with his rather famous 1999 paper, he is the lead author and so was part of a team.

The constantly increasing quantity of greenhouse gases being pumped into the atmosphere by humans is trapping more energy. This quite naturally leads to an expectation that extreme weather events are being caused by climate change. However, weather and climate are not the same thing. Weather itself is of course highly variable, hence any specific weather event, even an extreme drought or a super-storm, need not be evidence of a climate induced change.

That however has now changed.

The focus of the new paper is an analysis of planetary waves.

OK, so a bit more background first. Here is a video issued by the Potsdam Institute last year (where some of the authors comes from). It explains planetary waves phenomenon. Oh and least you wonder, yes, the guy you see in this clip, Kai Kornhuber, is also one of the co-authors of the new paper …

Learn how giant airstreams high in the sky get trapped sometimes – leading to devastating weather extremes on the ground.
Copyright: Potsdam Institute for Climate Impact Research PIK and Climate Media Factory. This video was supported by the German Research Foundation (DFG) and the German Federal Ministry of Education and Research (BMBF).

What Is the new Paper About?

It basically joins up the dots and establishes a link between human caused climate change and planetary waves.

As planetary waves, rivers of wind such as the jet stream, circle the planet in an eastward direction, variations and stalling in this flow occur. These variations can leave a specific region floundering. This will end up pushing weather into extremes causing drought and heatwaves. The importance here is that these planetary waves transport heat and moisture, so when these planetary waves stall, droughts or floods occur.

What this new paper does is to establish that warming caused by greenhouse-gases from fossil fuels creates favorable conditions for such planetary wave variations.

“we uncover a clear fingerprint of human activity.” – Michael Mann, the lead author

Here are a couple of quotes that I lifted from their press release.

“The unprecedented 2016 California drought, the 2011 U.S. heatwave and 2010 Pakistan flood as well as the 2003 European hot spell all belong to a most worrying series of extremes,” says Michael Mann from the Pennsylvania State University in the U.S., lead-author of the study now to be published in Scientific Reports.

“The increased incidence of these events exceeds what we would expect from the direct effects of global warming alone, so there must be an additional climate change effect. In data from computer simulations as well as observations, we identify changes that favor unusually persistent, extreme meanders of the jet stream that support such extreme weather events. Human activity has been suspected of contributing to this pattern before, but now we uncover a clear fingerprint of human activity.”

“If the same weather persists for weeks on end in one region, then sunny days can turn into a serious heat wave and drought, or lasting rains can lead to flooding. This occurs under specific conditions that favor what we call a quasi-resonant amplification that makes the north-south undulations of the jet stream grow very large. It also makes theses waves grind to a halt rather than moving from west to east. Identifying the human fingerprint on this process is advanced forensics.”

Co-author Kai Kornhuber, also from PIK, then picks things up …

“Good satellite data exists only for a relatively short time – too short to robustly conclude how the stalling events have been changing over time. In contrast, high-quality temperature measurements are available since the 1870s, so we use this to reconstruct the changes over time, We looked into dozens of different climate models – computer simulations called CMIP5 of this past period – as well as into observation data, and it turns out that the temperature distribution favoring planetary wave airstream stalling increased in almost 70 percent of the simulations since the start of the industrial age.”

“The more frequent persistent and meandering Jetstream states seems to be a relatively recent phenomenon, which makes it even more relevant, We certainly need to further investigate this – there is some good evidence, but also many open questions. In any case, such non-linear responses of the Earth system to human-made warming should be avoided. We can limit the risks associated with increases in weather extremes if we limit greenhouse-gas emissions.”

OK, so it is not quite as graphically sexy as a hockey stick, but it is still one more insight into what is happening.