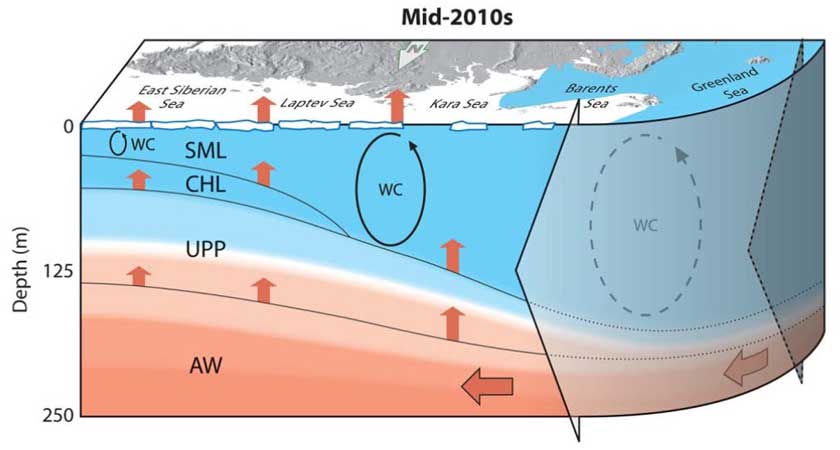 Within Science a new paper has been published that lays out clear evidence of a rather dramatic structural change that is taking place within the Arctic Ocean. To be clear, this is not something that has suddenly happened, but rather has been on-going for the past couple of decades. What is new is a better understanding.

It is Entitled, “Greater role for Atlantic inflows on sea-ice loss in the Eurasian Basin of the Arctic Ocean”

Here is what is already well-known

The Arctic ocean is distinctly different.

Normally as you descend deeper down into an ocean, it gets colder. Within the Arctic ocean it is the other way around, it gets warmer as you go down.

Basically it works like this. Rather a lot of cold fresh water flows into the Arctic ocean. About six major rivers empty into it. That sits on top.

Below that we have cold denser salty water, this is referred to as the Halocline.

Under that is warm dense salty water that flows in from the Atlantic. Because the warmer salty water is a lot denser, it sits at the bottom, and so the colder fresh water sits on top with the Halocline between acting as a barrier between. That is then all capped off by sea ice on the surface.

The term used to describe this is “stratification”. It also means that the Arctic ocean is rather unique in that it is a complete reversal of every other ocean where temperatures are colder deeper down.

Here is a diagram from the paper that illustrates this. 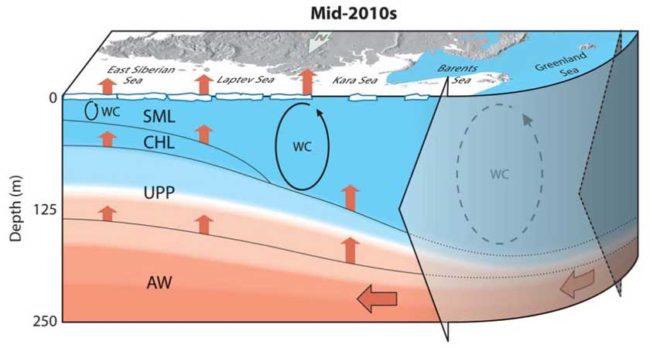 I better explain the abbreviations they use within the above:

The point of the paper is not to highlight this, but rather is to spell out in detail how this has been changing.

weakly stratified AW [Atlantic Water] entering the Nansen Basin through Fram Strait is subject to direct ventilation in winter, caused by cooling and haline convection associated with sea ice formation (15). This ventilation leads to the reduction of sea-ice thickness along the continental slope off Svalbard (16, 17). In the past, these conditions have been limited to the western EB, since winter ventilation of AW in the eastern EB [Eurasian Basin] was constrained by stronger stratification there. However, newly acquired data show that conditions previously only identified in the western Nansen Basin now can be observed in the eastern EB as well. We call this eastward progression of the western EB conditions the “atlantification” of the EB of the Arctic Ocean.

OK, so the essence of the new paper is this …

In other words, it is not just warm air pushing north that is melting Arctic sea ice, the heat stored up in the Atlantic Ocean is also playing a rather important role here.

How did they work this out? 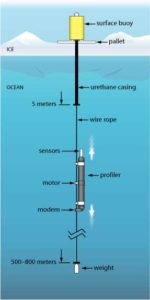 Observations from 2013 to 2015 using oceanographic moorings (fig. S2) and drifting Ice-Tethered Profiler buoys (ITPs) (3, 24) provide evidence that the eastern EB is in a transition to conditions similar to the western Nansen Basin. Mooring observations over the central Laptev Sea slope sustained since 2002 reveal anomalously strong seasonal signals in the subsurface layers during recent years

These are devices that are anchored to ice floes. ITPs dangle a long wireline through an ice hole. A Moored Profiler device equipped with sensors, slowly moves up and down the wireline, measuring seawater temperature, salinity, and other important ocean properties that provide evidence of changes in the ocean’s ecosystem. Data is relayed up the wireline to a transmitter atop the ice and then via satellite, in near-real time to a publicly accessible Web site.

And yes, as the ice moves, these also move. They are designed to last about three years.

You can read more about these devices here.

Let’s leave that the one of the many authors of the paper.

Eddy Carmack: a researcher with Fisheries and Oceans Canada and one of the study’s authors

“I first went to the Arctic in about 1969, and I’ve never seen anything like this,”

“Back then we just assumed the Arctic is as it is and it will be that way forevermore. So what we’re seeing in the last decade or so is quite remarkable.”

“This whole thing about the ocean’s role in sea ice retreat, it used to be minimal, but as sea ice retreats it’s one of those positive feedback mechanisms, And we’re talking a lot of heat in the Atlantic layer, it could melt all the ice in the Arctic if it were to pop up to the surface.”