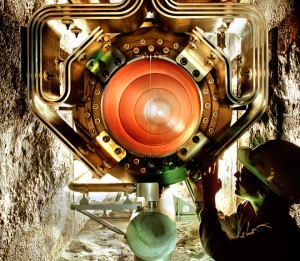 Two research teams have found new evidence of transformations in elusive elementary particles called neutrinos. The findings may finally help explain why the universe didn’t vanish shortly after its birth.

“These results are just the beginning of the story for neutrinos,” said physicist Robert Plunkett of Fermilab in Chicago. “They could be a clue, a leftover from the early universe, and tell us why there’s now far more matter than antimatter.”

Most neutrinos are emitted by the sun, and are so small and ghostly that billions pass through our bodies every second. Most go right through Earth without hitting anything. But some human-built devices — big chambers of oil or water lined with photon detectors, or detector array plunged into seawater or Antarctic ice — can record the blip of light when a neutrino occasionally slams into an atom.

Using these detection events, physicists have identified three types of neutrino, called muon, tau and electron neutrinos. Further discoveries suggest that each type can transform into another, with muon-to-tau and tau-to-electron neutrino transformations being dominant. Researchers proposed a third and weaker change, that of muon-to-electron neutrinos, but until now lacked evidence for its existence.

On June 14, the Japanese Tokai-to-Kamioka experiment reported the detection of muon-to-electron neutrino changes. On June 24, the Main Injector Neutrino Oscillation Search (MINOS) experiment at Fermilab reported the same. While the ranges of their data varied, the basic claims were the same.