This is truly amazing …

Using data from NASA’s Fermi Gamma-ray Space Telescope, scientists have recently discovered a gigantic, mysterious structure in our galaxy. This feature looks like a pair of bubbles extending above and below our galaxy’s center. Each lobe is 25,000 light-years tall and the whole structure may be only a few million years old. (Video credit: NASA’s Goddard Space Flight Center) 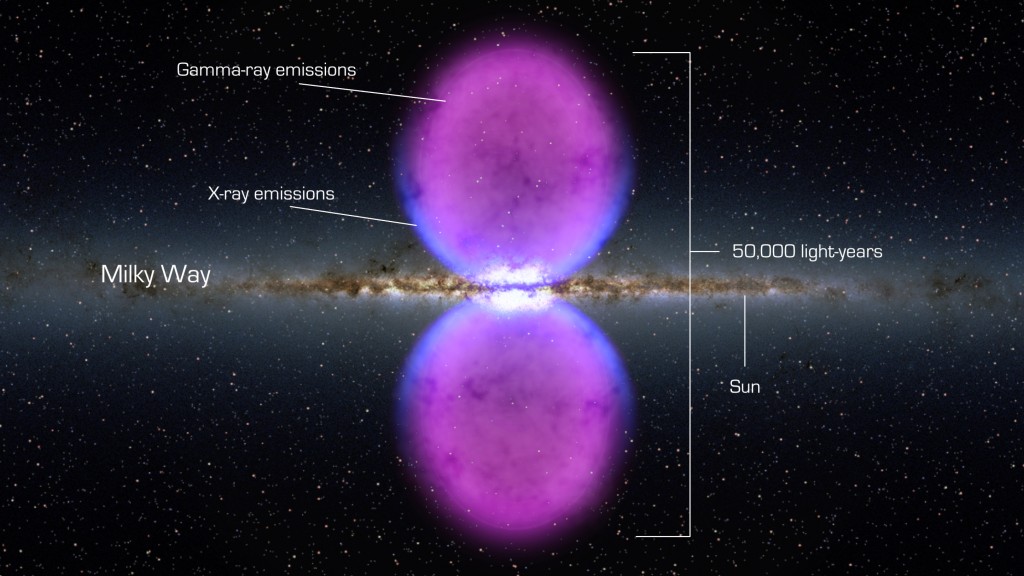 Here is the text of the press release …

WASHINGTON — NASA’s Fermi Gamma-ray Space Telescope has unveiled a previously unseen structure centered in the Milky Way. The feature spans 50,000 light-years and may be the remnant of an eruption from a supersized black hole at the center of our galaxy.

“What we see are two gamma-ray-emitting bubbles that extend 25,000 light-years north and south of the galactic center,” said Doug Finkbeiner, an astronomer at the Harvard-Smithsonian Center for Astrophysics in Cambridge, Mass., who first recognized the feature. “We don’t fully understand their nature or origin.”

The structure spans more than half of the visible sky, from the constellation Virgo to the constellation Grus, and it may be millions of years old. A paper about the findings has been accepted for publication in The Astrophysical Journal.

Finkbeiner and his team discovered the bubbles by processing publicly available data from Fermi’s Large Area Telescope (LAT). The LAT is the most sensitive and highest-resolution gamma-ray detector ever launched. Gamma rays are the highest-energy form of light.

Other astronomers studying gamma rays hadn’t detected the bubbles partly because of a fog of gamma rays that appears throughout the sky. The fog happens when particles moving near the speed of light interact with light and interstellar gas in the Milky Way. The LAT team constantly refines models to uncover new gamma-ray sources obscured by this so-called diffuse emission. By using various estimates of the fog, Finkbeiner and his colleagues were able to isolate it from the LAT data and unveil the giant bubbles.

Scientists now are conducting more analyses to better understand how the never-before-seen structure was formed. The bubble emissions are much more energetic than the gamma-ray fog seen elsewhere in the Milky Way. The bubbles also appear to have well-defined edges. The structure’s shape and emissions suggest it was formed as a result of a large and relatively rapid energy release – the source of which remains a mystery.

One possibility includes a particle jet from the supermassive black hole at the galactic center. In many other galaxies, astronomers see fast particle jets powered by matter falling toward a central black hole. While there is no evidence the Milky Way’s black hole has such a jet today, it may have in the past. The bubbles also may have formed as a result of gas outflows from a burst of star formation, perhaps the one that produced many massive star clusters in the Milky Way’s center several million years ago.

“In other galaxies, we see that starbursts can drive enormous gas outflows,” said David Spergel, a scientist at Princeton University in New Jersey. “Whatever the energy source behind these huge bubbles may be, it is connected to many deep questions in astrophysics.”