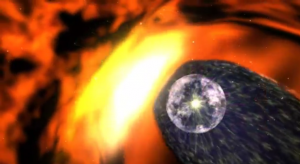 Did you also know that a great magnetic bubble surrounds the entire solar system as it cruises through the galaxy. Additionally, did you appreciate that the sun pumps the inside of this bubble full of solar particles that stream out to the edge until they collide with the material that fills the rest of the galaxy at a complex boundary called the heliosheath.

Still with me? Good, then lets keep going.

On the other side of the boundary, electrically charged particles from the galactic wind blow by, but rebound off the heliosheath, never to enter the solar system. Neutral particles, on the other hand, are a different story. They saunter across the boundary as if it weren’t there, continuing on another 7.5 billion miles for 30 years until they get caught by the sun’s gravity, and sling shot around the star. 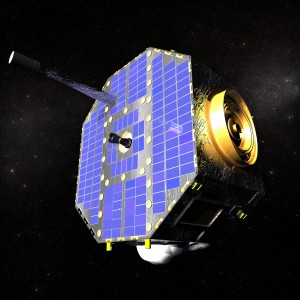 How do we know all this ? Well because NASA’s Interstellar Boundary Explorer (IBEX) has been checking all this out. There is now new data, it has captured the best and most complete glimpse yet of what lies beyond the solar system.

This is all very exciting because these new measurements give us clues about how and where our solar system formed, the forces that physically shape our solar system, and the history of other stars in the Milky Way.

What exactly has been seen?

(I’ve ripped off the following from their press release but tweaked it a bit to clarify a few things).

The Earth-orbiting spacecraft observed four separate types of atoms including hydrogen, oxygen, neon and helium. These interstellar atoms are the byproducts of older stars, which spread across the galaxy and fill the vast space between stars. [You do of course appreciate that the atoms inside you came from an exploding star, right?]

IBEX determined the distribution of these elements outside the solar system, which are flowing charged and neutral particles that blow through the galaxy, or the so-called interstellar wind. [Wow, we don’t just have a solar wind, but also an interstellar wind]

“Our solar system is different than the space right outside it, suggesting two possibilities,” says David McComas, IBEX principal investigator, at the Southwest Research Institute in San Antonio.

“Either the solar system evolved in a separate, more oxygen-rich part of the galaxy than where we currently reside, or a great deal of critical, life-giving oxygen lies trapped in interstellar dust grains or ices, unable to move freely throughout space.”

The new results hold clues about the history of material in the universe. While the big bang initially created hydrogen and helium, only the supernovae explosions at the end of a star’s life can spread the heavier elements of oxygen and neon through the galaxy. Knowing the amounts of elements in space may help scientists map how our galaxy evolved and changed over time.

Scientists want to understand the composition of the boundary region that separates the nearest reaches of our galaxy, called the local interstellar medium, from our heliosphere. The heliosphere acts as a protective bubble that shields our solar system from most of the dangerous galactic cosmic radiation that otherwise would enter the solar system from interstellar space.

“Measuring the pressure on our heliosphere from the material in the galaxy and from the magnetic fields out there will help determine the size and shape of our solar system as it travels through the galaxy,” – Eric Christian, IBEX mission scientist, at NASA’s Goddard Space Flight Center in Greenbelt, Md.

Some background Information on IBEX

The IBEX spacecraft was launched in October 2008. Its science objective is to discover the nature of the interactions between the solar wind and the interstellar medium at the edge of our solar system.

The Southwest Research Institute developed and leads the IBEX mission with a team of national and international partners.

The spacecraft is one of NASA’s series of low-cost, rapidly developed missions in the Small Explorers Program. Goddard manages the program for the agency’s Science Mission Directorate at NASA Headquarters in Washington.