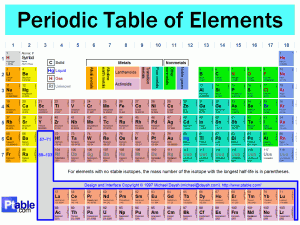 We have two new elements in the periodic table, 114 and 116. The details are in the Journal of Pure and Applied Chemistry here. Both are highly radioactive and exist for less than a second before decaying into lighter atoms, so blink and you will indeed miss them. This has been on the cards for some time now, and have been submitted for inclusion along with claims for 113, 115 , and 118. Well, 114 and 116 just made it.

And the name for these new elements is … ah well now, thats the problem you see, they don’t have official names yet. So how does this work, who gets to pick the names? Its the discovers, the scientists who synthesize any new elements who are allowed to recommend permanent names for their creations—but only after the body that actually assigns names, the International Union of Pure and Applied Chemistry, can verify that the researchers in question really have created the element, and as we have now just seen, its a process that can take years. Well, now that we have IUPAC confirmation, we are all set of the new permanent names to be proposed.

They don’t get to pick anything, so sadly we won’t expect to see Adamantium pop up soon on our geek shower curtains. They have specific guidelines:

“Elements can be named after a mythological concept, a mineral, a place or country, a property, or a scientist.”

Oh yes, one more rule, the names of all new elements must end in -ium.

Once an appropriate name has been submitted, the IUPAC then publishes it and invites public comment for five months. After responding to all relevant comments they recommend the name to the IUPAC Council. There a final vote takes place.

So, if waiting for the new names … well, don’t hold your breath.