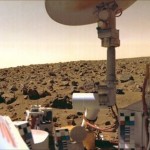 Carbon-rich organic molecules, which serve as the building blocks of life, may be present on Mars after all, say scientists – challenging a widely-held notion of the Red Planet as barren.

When Nasa’s two Viking landers picked up and examined samples of Martian soil in 1976, scientists found no evidence for carbon-rich molecules or biology.

But after the Phoenix Mars Lander discovered the chlorine-containing chemical perchlorate in the planet’s “arctic” region in 2008, scientists decided to re-visit the issue.

“This doesn’t say anything about the question of whether or not life has existed on Mars”, Chris McKay Nasa’s Ames Research Center

They travelled to the Atacama Desert in Chile, where conditions are believed to be similar to those on Mars.

After mixing the soil with perchlorate and heating it, they found that the gases produced were carbon dioxide and traces of chloromethane and dichloromethane – just like the gases released by the chemical reactions after the Viking landers heated the Martian soil more than three decades ago.

They also found that chemical reactions effectively destroyed all organic compounds in the soil.

“Our results suggest that not only organics, but also perchlorate, may have been present in the soil at both Viking landing sites,” said the study’s lead author, Rafael Navarro-González of the National Autonomous University of Mexico, Mexico City.

But despite the excitement about the finding, the researchers warn it is too early to conclude that the Red Planet has ever had life.

“This doesn’t say anything about the question of whether or not life has existed on Mars, but it could make a big difference in how we look for evidence to answer that question,” said Chris McKay of Nasa’s Ames Research Center, California.

He explained that organics can come from either biological and non-bio sources – many meteorites that have fallen on Earth have organic material.

Perchlorate, an ion of chlorine and oxygen, could have been present on Mars for billions of years and only manifest itself when heated, destroying all the organics in the soil.

When scientists originally examined the data from the Viking probes, they interpreted the chlorine-containing organic compounds as contaminants from cleaning fluids carried on the spacecraft.

It is not yet clear whether the organic molecules are indigenous to the Red Planet or have been brought by meteorites.

This will be one of the goals of upcoming missions to Mars. In 2011, Nasa is planning to kick off its Mars Science Laboratory (MSL) mission, with the Curiosity rover designed to search for organic material on the planet.