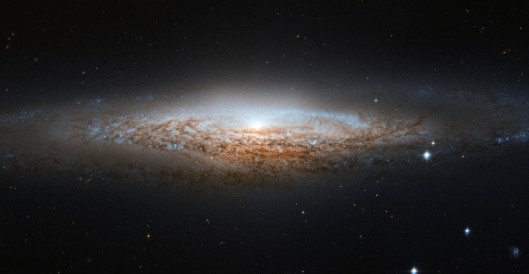 Roughly about a month ago there was an article over on the Wall Street Journal entitled. “Science Increasingly Makes the Case for God.” by Eric Metaxas.

Lawrence M. Krauss, a Professor in the School of Earth and Space Exploration and Directors of the Origins Project at Arizona State University, attempted to reply, but the WSJ did not publish it, and so the Richard Dawkins foundation published it instead.

The latest update on all this is that the New Yorker has now published a complete debunking of the Wall Street Journal article, and that is of course by Lawrence M. Krauss.

Today there are more than 200 known parameters necessary for a planet to support life — every single one of which must be perfectly met, or the whole thing falls apart… The odds against life in the universe are simply astonishing.

… therefore a god must has done it.

In rebuttal, the rather obvious observation is now made by Prof Krauss …

Such a claim is fraught with statistical perils, however. The first is a familiar mistake of elaborating all the factors responsible for some specific event and calculating all the probabilities as if they were independent. In order for me to be writing this piece at this precise instant on this airplane, having done all the things I’ve done today, consider all the factors that had to be “just right”: I had to find myself in San Francisco, among all the cities in the world; the sequence of stoplights that my taxi had to traverse had to be just right, in order to get me to the airport when I did; the airport security screener had to experience a similar set of coincidences in order to be there when I needed her; same goes for the pilot. It would be easy for me to derive a set of probabilities that, when multiplied together, would produce a number so small that it would be statistically impossible for me to be here now writing.

His full rebuttal is a good one, you should go and read it.

Arguments and counter arguments aside, what is of concern here is that the Wall Street Journal, a supposedly reputable paper, published what is in essence a religious tract that was then shared or liked on Facebook almost 400,000 times, primarily because it falsely claimed that there was scientific evidence for a god, and of course you know that they did not mean Thor or Loki, but rather the specific god concept that prevails today, and so it acted as a form of confirmation bias for many.

Often when in conversation with those that believe, I encounter an unwarranted degree of certainty that has no rational basis and simply cannot be justified when challenged.  The meta-argument that is perhaps the most common can be expressed as follows :-

Debunk whatever variation of this specific meta-argument is on offer and people do not change their minds. That is because that was never the reason they actually believed at all, but rather was more akin to a layer of rationalisation that was applied later, long after the belief took up residence in the human mind.

Those who are deeply invested emotionally in the prevailing cultural belief are in essence almost immune to any rational discourse and so if we are to win humans over to a more rational evidence-based modality, then we need to win hearts, and not just minds. To belittle, to take a “them vs us” stance, and to win every argument going is to run upon a treadmill that creates the illusion of progress, but in reality takes us nowhere. Instead we need to befriend and win the hearts of those ensnared in the psychological trance that human culture can inject into us, and share about how we have found freedom from the slavery of archaic cultural beliefs, and a desire to go and discover the things that are really true.