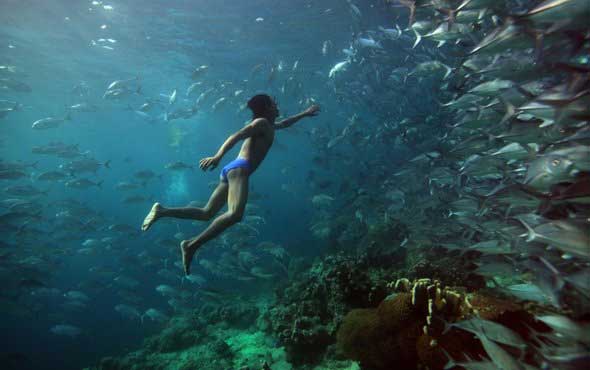 Some people can with practise hold their breath for long periods of time and by doing so accomplish some amazing feats of Freediving. That is more about fitness and skill, not human evolution.

There is however a new study that points towards some humans actually adapting and evolving over many generations to be able to dive deeper and for longer periods of time. Published in Cell and entitled “Physiological and Genetic Adaptations to Diving in Sea Nomads” it lays out the evidence that the indigenous Bajau, or “Sea Nomads,” of Southeast Asia who have engaged in breath-hold diving for thousands of years, appear to have actually evolved an enhanced breath holding ability that can be very specifically measured at a genetic level.

It’s Not a First

Prior to this, the other examples of recent Human Evolution at a genetic level consisted of high-altitude human populations within both the Andes and also in Tibet who have adapted to their different environments …

While the rest of the human population would suffer serious health consequences, the indigenous inhabitants of these regions thrive well in the highest parts of the world. These people have undergone extensive physiological and genetic changes, particularly in the regulatory systems of oxygen respiration and blood circulation, when compared to the general lowland population.[1][2]

Some details extracted directly from the study

Let’s briefly take a look at some of the details from the study.

What exactly does the new study in Cell do?

Using a comparative genomic study, we show that natural selection on genetic variants in the PDE10A gene have increased spleen size in the Bajau, providing them with a larger reservoir of oxygenated red blood cells. We also find evidence of strong selection specific to the Bajau on BDKRB2, a gene affecting the human diving reflex. Thus, the Bajau, and possibly other diving populations, provide a new opportunity to study human adaptation to hypoxia tolerance.

Who are these people and what skills do they have?

The Bajau people, often referred to as Sea Nomads, have lived an entirely marine-dependent existence, traveling the Southeast Asian seas on houseboats for over 1,000 years. Their marine hunter-gatherer existence depends notably on the food they collect through free diving. They are renowned for their extraordinary abilities, diving to depths of over 70 m with nothing more than a set of weights and a pair of wooden goggles and spending 60% of their daily working time underwater.

We do actually have a diving response – spleen size matters

Humans, like other diving mammals, have a diving response induced by apnea and cold-water facial immersion. Physiological effects of this response include bradycardia, which lowers oxygen consumption; peripheral vasoconstriction, which selectively redistributes blood flow to the organs most sensitive to hypoxia; and contraction of the spleen, which injects a supply of oxygenated red blood cells into the circulatory system.

… In a study of diving seal species, a positive correlation was observed between maximum dive time and spleen mass, suggesting that spleen size could be an important trait affecting diving time.

We first set out to identify if there is evidence that the Bajau have larger spleens than their close geographic neighbors, the Saluan, who interact minimally with the marine environment. We identified two seaside villages ∼25 km apart in the Central Sulawesi peninsula of Indonesia: Jaya Bakti and Koyoan, primarily inhabited by ethnic Bajau and Saluan populations, respectively. We recruited 59 Bajau and 34 Saluan individuals to participate in the study, and from each individual we collected saliva samples for DNA and spleen measurements using a portable ultrasound machine.

… and as you might anticipate the spleen size was higher among the Bajau. To be precise, the Bajau spleen were about 50% bigger.

Interestingly enough, they also note that all the Bajau had a larger spleen, and that included those in their community who did not dive. This suggested that it was not just something that only those who dived developed but instead was part of their genetic inheritance. This is a measurable physiological difference.

They are also unique at a genetic level

Overall, our results suggest that the Bajau have undergone unique adaptations associated with spleen size and the diving response, adding new examples to the list of remarkable genetic adaptations humans have experienced in recent evolutionary history. Similar to other of the most extreme adaptations human have experienced, such as adaptation to diet associated with pastoralism or shifts in environmental availability of food resources, these genetic adaptations have emerged as a consequence of new cultural practices, illustrating that human culture and biology have been co-evolving for thousands of years.

Prior studies using locally adapted populations to investigate the underlying genetics of hypoxia tolerance and related physiological processes in humans have focused nearly exclusively on high altitude populations. The Bajau, and other diving-dependent populations, exhibit an entirely new system of human physiological adaptations to environmental conditions not previously explored.

So just how good are they in the Water?

From a Scientific American Article that covers this …

Previously, a crew filming for the BBC documentary series Human Planet recorded a Bajau hunter during dives, and noted his heart rate plummeted to a mere 30 beats per minute. (The diving reflex in most humans only drops the heart rate to perhaps 50 beats per minute in a healthy adult.) “They’ve been observed diving over 70 meters with only a weight belt and a set of goggles,” Ilardo says. “If they’re just collecting shellfish at 10 meters, they could spend all day doing these shallow dives. We were diving at one point and [a Bajau friend] looked down and saw a large clam. He dropped another 15 meters in an instant and grabbed it. It’s pretty remarkable.”