Wired then goes on to report …

The loop of hot plasma has been snaking around the sun’s southeast limb since Dec. 4, and appears to be growing by the hour. When NASA’s Solar Dynamics Observatory saw it on Dec. 4, the filament was more than 250,000 miles long, about 30 times the diameter of the Earth. In this new image, taken at 9:30 am PST on Dec. 6, the loop of charged plasma stretches more than 435,000 miles, the full radius of the sun itself.

So far the gigantic prominence has hung suspended peacefully above the sun’s surface, but this morning it started showing signs of instability. Long filaments like this one can break apart as coronal mass ejections, releasing tons of hot, charged material into the inner solar system and potentially causing magnetic storms on Earth. If the filament collapses in the next day or so, the results could be spectacular.

Holy cow, thanks to Emily Lakdwalla and mars_stu, here is a freaking enormous loop of plasma arcing off the surface of the Sun: 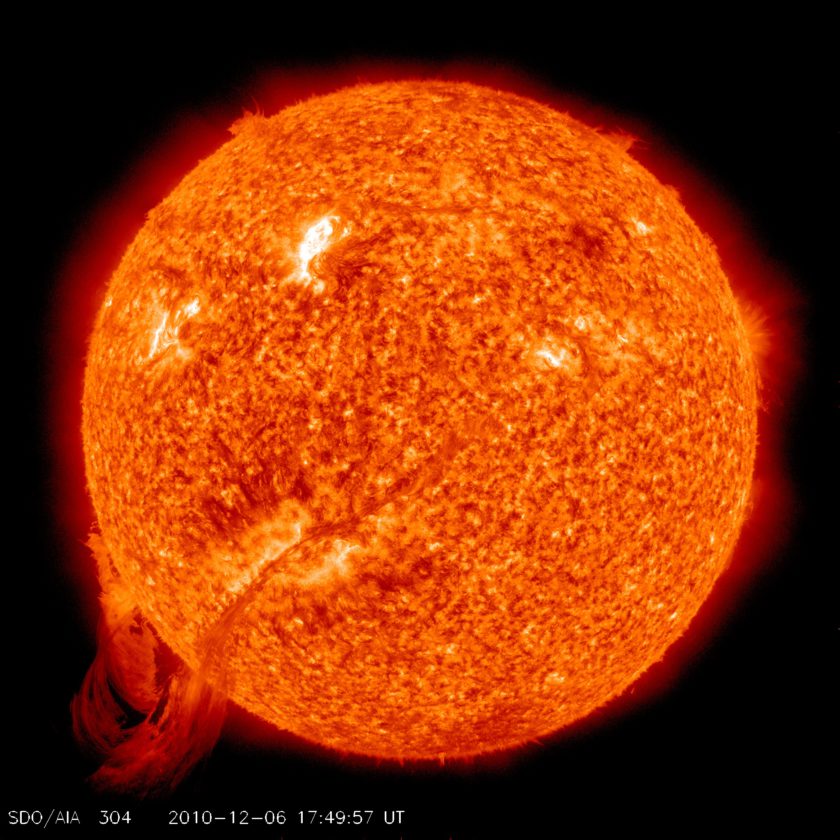 That was taken by the Solar Dynamics Observatory at about 17:50 UT, or just an hour or so ago as I post this. Wow! That prominence must be nearly a million kilometers across! [Update: Geeked on Goddard estimates it at 700,000 km.] Mind you, on the scale of this image, the entire Earth would be about 5 pixels in size.

1) First, there is very little danger to Earth from this event. Prominences like this tend to be local to the Sun, and collapse after a few hours. As far as I can tell, there are no flares or coronal mass ejections associated with this, which are what can hurt satellites and power grids here at home. So rest easy, and enjoy the beauty of this thing. 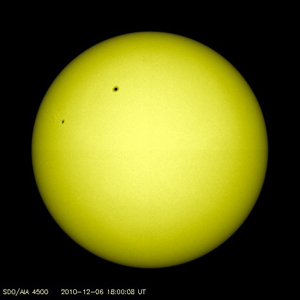 2) Amazingly, there is no hint of this event in this SDO visible light image (seen here; click to embiggen) taken at nearly the same time. The false-color image of the prominence above is actually taken in the ultraviolet, where low-density helium glows. In visible light, the light from the extremely thin material in the prominence is totally overwhelmed by the intense emission from the Sun’s surface, and is invisible. It’s only when we filter out most of the Sun’s light (and let through light specifically given off by the plasma in the prominence) that we can see it at all.

3) Note that the dark sunspots in the visible light image are seen as being very bright in the ultraviolet helium image. The Sun’s magnetic field is incredibly complex, with gigantic loops of magnetic field lines piercing through the Sun’s surface and re-entering some distance away. Sunspots are where the magnetic field strength is high. This prevents the gas from rising and falling in the Sun, so packets of gas boiling up from below reach the surface and cool off a bit, darkening. But in the ultraviolet, the magnetic energy is more easily seen, making the spots look bright.

That goes to show you that what we see in the heavens is not all we get. Our understanding of the Sun comes from centuries of observations, but it’s only been in the past few decades that we’ve let our vision widen to include light our eyes cannot detect. And when we do that we find our local star to be a vastly more interesting place than we had ever dreamed of.

Click here to go to Phil’s original posting which I stole borrowed and replicated here simply because it was so dam cool (humm … did I actually say that the sun is cool!!!).