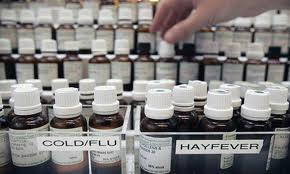 The UK’s Guardian is running a homeopathic poll in which they ask you to vote “yes” or “no” in response to the question, “Should homeopathic treatments be available on the National Health Service?”.  Perhaps you have already had this pointed out and have been encourage to vote “no”, but have you really thought about it?

Hey it’s an easy question, the answer is obvious … or is it? (Don’t panic, it is, I just want you to think through the arguments and to also explain why the NHS still has it on offer)

Well lets start with the basics – homeopathy does nothing at all, the remedies do not contain any pharmacologically active molecules, they are diluted to such an extreme that nothing remains at all, but you knew that, right, so why would you vote “yes”?

Just to drive that point home, if you go to the cochrane library and type homeopathy you’ll find a meta analysis of the most reliable, unbiased, well conducted trials that clearly demonstrate no advantage to homeopathy above placebo, it is a well established fact that it does not work.

Ah but before you rush out to vote “no”, consider this. When a GP is faced with a patient that has a vague complaint that is very likely to be amenable to a placebo, then it is damn handy to be able to refer them to a homeopath. “But it does nothing and that costs public money!!!“, well yes that is true, but it is also a heck of a lot cheaper, and is a very useful tool to keep all the hypochondriacs out-of-the-way and distracted leaving GP’s free to focus on the folks who are really ill and do indeed need real medicine. Apart from the fringe “believers”, that is in essence what is going on here and explains why plenty of smart folks still endorse and fund it. For the NHS to officially fund placebos it would open up an ethical debate, but by pretending that all this really works you effectively side-step that issue.

Knowing that, how would you now vote?

“Ok, I get it“, you say, “so it’s a yes then?” Alas no, unfortunately it is just not that simple (it never is). The other side of the coin here is (and I’ve highlighted this already) that homeopathy does nothing at all, so when you have homeopathy practitioners deploying it as the sole solution for really serious stuff you are putting lives at risk. Think HIV, or perhaps being given homeopathy as an antimalarial protection prior to a foreign holiday instead of real medicine, it has happened and it will continue to happen, so while the NHS itself would not do this, the fact that homeopathy is available on the NHS for minor vague complaints sends a false “it works” message and that enables homeopaths to do some really serious and very preventable harm.

With all that in mind … how would you now vote?

Ah but just before you cast your vote here, you might also like to review an open letter written at quackwatch to Professor David Bellamy, the Patron of the British Homeopathic Association. It talks about the ongoing decline of homeopathy, and also highlights the irresponsibility of a large number of non-medically qualified homeopaths who practice homeopathy in very a dangerous manner. The worst examples of this included UK homeopaths who travel to Africa to treat people with HIV, TB and malaria. You can read this letter here.

We are not done quite yet. Just before you pop over to the poll to vote, you might also like to watch Tim Minchin’s beat poem “Storm”.

OK, you are ready now, so click here to vote.  Sigh! … Never have so few molecules generated so much hype.