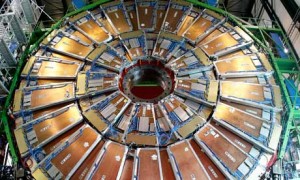 Has a Higgs boson been found, in fact will it ever be found? … No, we don’t know yet, but we soon might. Ian Sample writes in today’s UK Guardian that staff at the LHC have arranged a special seminar on Tuesday 13 December at which the latest results in the search for the Higgs boson will be made public. He explains …

The two main groups that hunt the Higgs boson, the Atlas and CMS detector collaborations, will describe their results separately …

If both teams have analysed all their data, up to the last proton-proton collision recorded in October this year, we are into interesting territory.

Now you might be thinking that perhaps it will be a big disappointment and that they announce that it does not exist at all. Well think again, because that would be very big news and a truly exciting discovery to make. Steven Weinberg, who shared the Nobel prize for physics in 1979, is quoted as explaining, “It would be just what we’re expecting and it would give us no clue to anything new. Finding several kinds of Higgs, or even no Higgs at all, would be better”. Now that I can truly understand, because what we then have is a mystery, we would instead be gazing out into the void and simply not understanding what we are seeing at all, and so we would have a call to arms and a race to grasp an understanding. Personally, I love the beauty of supersymmetry, an idea that says that every kind of particle has an invisible twin, but unless we can verify such theory, then no matter who said it, no matter how beautiful and perfect the model is, if the evidence does not stack up … its wrong. Now that is exciting, because when faced with the unknown it drives us to push forward and go find out.

OK, a bit more about Higgs, just in case you are not sure what it actually is or why folks are looking for it. The Higgs boson is a hypothetical massive elementary particle that is predicted to exist by the Standard Model (SM) of particle physics. Its existence is postulated as a means of resolving inconsistencies in the Standard Model. If it truly is there, then the model as we currently understand it stands and that would be rather dull, because we have learned nothing new, but have instead only confirmed what we already suspect.

The big mystery is why particles have mass. To solve that we have the Higgs mechanism. That in turn has the Higgs boson as a requirement.

So what comes next, the dull, “Yep we had it right, here is Higgs, or a hint of Higgs bosons”, or the more exciting, “We have no idea” – we only have to wait 12 days to find out.