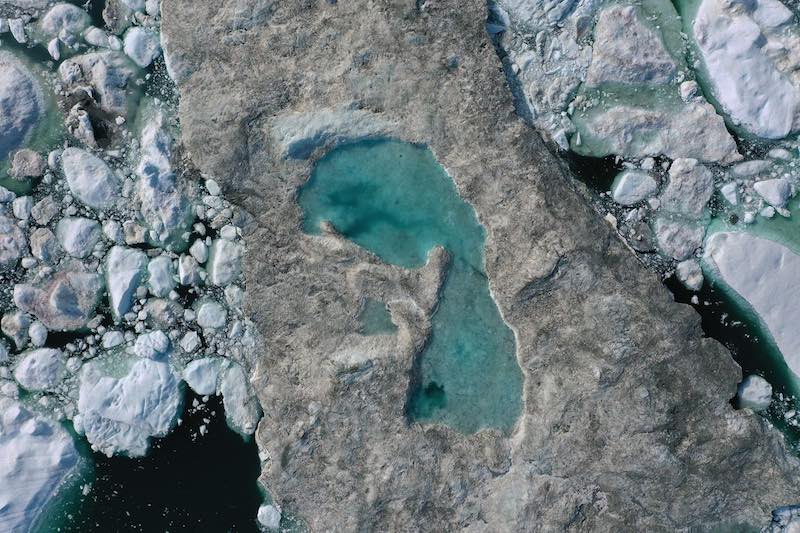 The rather “shocking” fact is that in summer ice in Greenland is melting. OK, I put air quotes around the word “shocking” to suggest that this is what happens in summer and to hint that we should not be shocked. However, what is currently happening is actually truly shocking the subject matter experts, and so that should perhaps concern us.

Yes, ice is melting, and yes it is summer in the Northern Hemisphere, that is what happens in summer. This however is melting on steroids. The quantity of melt taking place is currently unprecedented. So much water is being released into the ocean that this one melt event will have a measurable impact upon sea level.

The National Snow and Ice Data Center tracks it all from Satellites, hence taking a look at their precise measurements is not an argument with a media story author, nor is it a debate. This is raw cold data.

So what do we have?

We have measurements of the melt rate …

Looking back across all their data for this year, they have this observation …

Melting in Greenland through the end of spring has been significantly higher than the 1981 to 2010 average, with several areas exceeding 10 days of additional melt above the average, and a few regions with more than 20 days

Here is another data source – the Danish Arctic Monitoring website. They are more than a little bit concerned …

Is it just Greenland?

The Russian government has belatedly declared a state of emergency in four Siberian regions and reportedly sent troops to help extinguish forest firesthat have ripped across an area the size of Belgium.

This follows record-high temperatures in several locations. Last weekend, Norway registered its joint hottest day ever. More than 20 areas in the north of the country have recently experienced “tropical nights”, with temperatures above 20C from dusk until dawn.

In the Canadian Arctic, which is warming two times faster than the global average, locals have suffered record wildfires, and permafrost is melting decades ahead of predictions. Last month, the far northern community of Alert, Nunavut, registered a record-high of 21C, which a local meteorologist said it had never been seen that close to the pole.

European mountains have been affected too. Authorities have warned that the slopes below the Matterhorn’s 4,480-metre peak are increasingly prone to avalanches and landslides because the ice-core is warming. High-altitude lakes of meltwater have also been reported in the Mont Blanc mountain range in France.

In Switzerland, the threat to alpine glaciers has been so alarming that more regions are using giant fleece blankets to try to insulate the ice from the hot air. Even so, the country’s glaciers lost about 0.8bn tons of snow and ice during the two recent heatwaves, according to glaciologist Matthias Huss.

“Absolutely exceptional for a period of only 14 days in total!” Huss said on Twitter. “And the summer is not yet over.”

This news should be the big ticket headline

For the media, the focus is Boris, Trump, Brexit, etc… Climate Change is the real news. In the centuries to come, nobody will remember much about Boris, Trump, or Brexit, except to perhaps wonder why so many could have been so utterly devoid of any common sense. They will however be fully aware of the reality of our unwillingness to take decisive meaningful action to mitigate climate change, even when faced with overwhelming evidence.

There will be no avoiding the consequences, it will be bad.

What is also true right now is that the window of opportunity for us to take meaningful action is still open, and so there is still hope.

“reality must take precedence over public relations, for Nature cannot be fooled.”

There is lots of buzz …