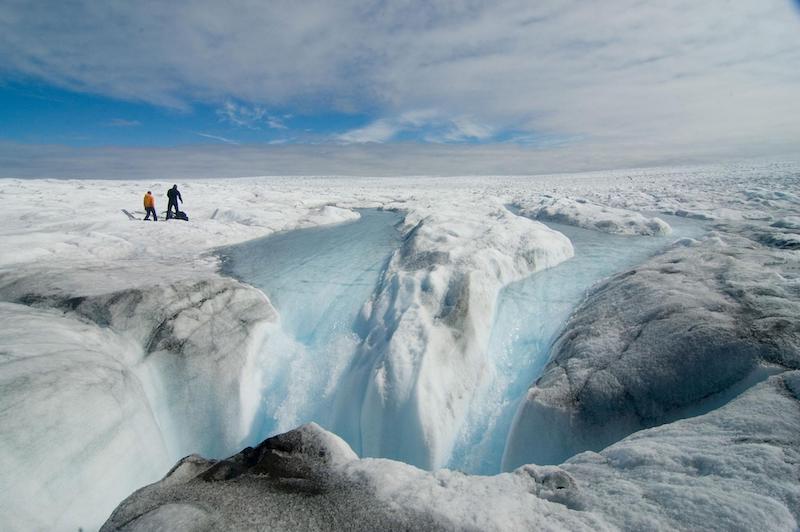 Shocking new insights reveals that the Greenland ice mass is rapidly melting. The rate of now four times faster than it was in 2003. This will lead to a faster sea level rise.

Let’s jump into the actual study and see what it actually tells us.

Published within PNAS on 22nd January 2019, it uses satellite data to precisely measure what is happening to the ice mass.

Exactly what was measured?

The Gravity Recovery and Climate Experiment (GRACE) consist of a pair of twin satellites (nicknamed “Tom” and “Jerry”) that remain in constance communication.

Changes in Ice mass, when large enough, will alter this measurement, and so over a long timespan a precise measurement of what is happening can be determined.

The largest sustained (∼10 years) acceleration in ice loss detected occurred in southwest Greenland …. but … this is an area largely devoid of glaciers.

This sustained acceleration in mass loss recorded by GRACE before mid-2013 was completely unprecedented.

There has been a scientific focus on the ice loss from glaciers in the southeast and northwest regions but this new study reveals that the greatest degree of ice loss is clearly not glaciers but instead is the melting of the inland ice sheet. Melted ice has been flowing as vast rivers of water into the ocean.

What they measured is that from early 2003 to mid-2013, the total mass of ice in Greenland declined at a progressively increasing rate. In mid-2013, an abrupt reversal occurred, and very little net ice loss occurred in the next 12–18 months. Then in early 2015 that pause ended and the rate of significant ice loss was reestablished.

Within two decades the southwest part of the Greenland Ice Sheet will become a major contributor to sea level rise. There is also the suggestion that enhanced summertime melting may induce more sustained increases in discharge rates.

“Whatever this was, it couldn’t be explained by glaciers, because there aren’t many there,” said Michael Bevis, lead author of the paper, Ohio Eminent Scholar and a professor of geodynamics at The Ohio State University. “It had to be the surface mass—the ice was melting inland from the coastline.”

“We knew we had one big problem with increasing rates of ice discharge by some large outlet glaciers,” he said. “But now we recognize a second serious problem: Increasingly, large amounts of ice mass are going to leave as meltwater, as rivers that flow into the sea.”

“The only thing we can do is adapt and mitigate further global warming—it’s too late for there to be no effect,” he said. “This is going to cause additional sea level rise. We are watching the ice sheet hit a tipping point.”

“These oscillations have been happening forever,” Bevis said. “So why only now are they causing this massive melt? It’s because the atmosphere is, at its baseline, warmer. The transient warming driven by the North Atlantic Oscillation was riding on top of more sustained, global warming.”

“global warming has brought summertime temperatures in a significant portion of Greenland close to the melting point, and the North Atlantic Oscillation has provided the extra push that caused large areas of ice to melt”

“We’re going to see faster and faster sea level rise for the foreseeable future,” Bevis said. “Once you hit that tipping point, the only question is: How severe does it get?”

The media have been shouting about this, but is anybody really paying attention?

Some you, but mostly probably not.