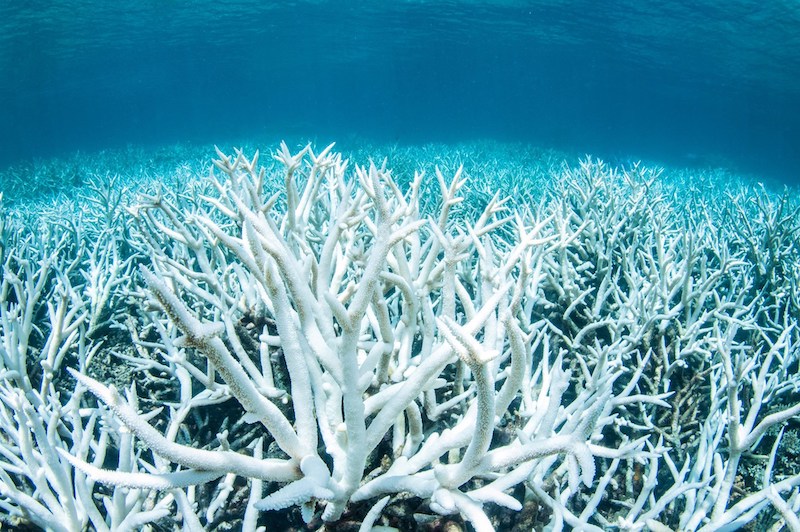 Yet another major bleaching event is happening right now to the Great Barrier Reef. This news has perhaps been eclipsed by global events and so has passed almost unnoticed. It is however a very big deal.

As reported by ABC News …

The entire Great Barrier Reef and some of its surrounding areas are facing an unprecedented period of heat stress in what is the third major bleaching event in only the past five years. Heat-induced bleaching can occur periodically, but scientists say climate change is causing the destructive events to happen more frequently, which is particularly troubling because corals don’t have enough time to recover and grow back.

“This has never happened before,” Eakin said. “We’re in completely uncharted territory.”

The Great Barrier Reef has only ever bleached 5 times. The first was in 1998, then again four years later in 2002.

Fourteen years later it happened in 2016 and then shockingly in 2017. Now it is happening again.

Coral Reefs are often referred to as the Rainforests of the Ocean. This is because they hold a vast diversity of life. They might indeed be only 0.1% of the ocean area, but they are home to at least 25% of all marine species.

They are also very fragile and sensitive, hence they are our Sentinel for Climate Change. Here now is yet another warning that we face a far greater looming risk than the one that currently occupies us all.

Terry Hughes is a professor of marine biology at James Cook University in Queensland, Australia. He is well known for research on the global coral bleaching event caused by climate change. Nature dubbed him “Reef sentinel” in 2016 for the global role he plays in applying multi-disciplinary science to securing reef sustainability. He is an Australian Research Council Laureate Fellow and Director of the Australian Research Council (ARC) Centre of Excellence for Coral Reef Studies.

He very much has his finger on the pulse and is currently conducting a survey of what is happening. Below are some of his recent tweets. They give you a window into what is going on right now …

That last tweet brings us more or less up to now. He just tweeted that out as I was composing this posting.