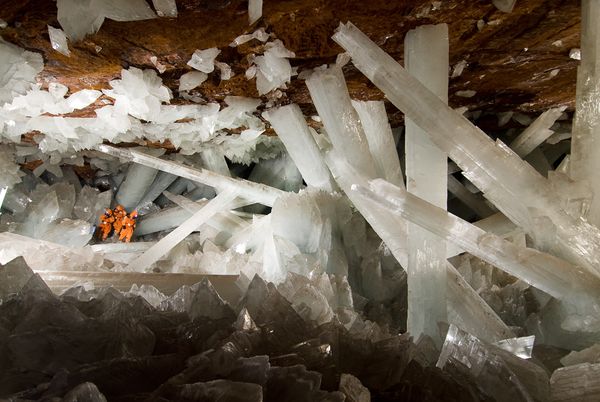 OK, lets first put this in context. A quick casual glance might simply solicit a “Nice, but I’ve seen rock crystals like that before” response. Well think again, because you have seen nothing like this … ever. Look carefully, those tiny little orange blobs are people …

Ah yes, now you get it … the scale of these natural crystals is quite frankly astonishing.

In the two-story-tall, football-field-size Cave of Crystals, enormous beams of gypsum—among the largest freestanding crystals in the world—sprout haphazardly from the ceiling, floor, and walls. Individually, though, the crystals appear anything but haphazard, sporting the sharp, geometric appearance that scientists call euhedral.

This jewel-like effect makes the giant crystals truly unique, according to John Rakovan, a mineralogist at Miami University in Ohio, who was not involved in the project.

“When crystals get larger and larger, they become less euhedral, typically”—and more rocklike. “Scientists didn’t think it was possible to get large crystals that are so morphologically perfect” before the Cave of Crystals discovery, Rakovan said.

The translucent columns also resemble giant pillars of ice but are warmed by superheated air leaking up from underground magma chambers.

If you would really love to go see these, then I better prepare you. You can’t simply wander in, without appropriate protection you would be dead within 30 minutes. Because the the superheated air coming up from magma chambers below, the caves have a combination of 90 percent humidity and a temperature of 118 degrees … so without protection, you would be literally cooked in there. The bright orange suits you see are special ice-cooled protection to enable the explorers to go there, without them, this would be a no-go zone, but even then all the suits give you is 1 hour in there instead of 15 minutes.

Though the calling card of the horseshoe-shaped Cave of Crystals may be its massive mineral formations, some of its biggest surprises are literally microscopic.

In 2008 a team of scientists, including New Mexico Tech’s Boston, investigated the cave and found microbial life living in tiny air pockets in the crystals.

In December 2009 Boston returned to the cave with another team. From pools of water that hadn’t been present during her first trip, the scientists collected bacteria as well as viruses that prey on the bacteria—something that was suspected but had not been confirmed on the first expedition.

Viruses, after all, are among the “primary predators of bacteria,” explained Danielle Winget, a biologist at the University of British Columbia, in the new documentary.

Sure enough, the team found as many as 200 million viruses in a single drop of Cave of Crystals water.

But the virus finding was perhaps not the expedition’s most surprising microbial discovery. Analysis of bacterial DNA from the Cave of Crystals showed that the tiny life-forms are related to microbes living in other extreme environments around the world, including caves in South Africa and Australia as well as hydrothermal vents (video).

“We’re picking up these patterns of similarities in places that are geographically widely separated,” Boston said.

That similarity and separation adds up to a mystery, according to Curtis Suttle, a biologist at University of British Columbia and a member of the 2009 Cave of Crystals expedition.

“We don’t really understand how it is that the organisms in a hydrothermal vent in Greece or a deep gold mine in South Africa are related to organisms that we find in a subsurface cave” at Naica, Suttle said.

You can read more here … on the National geographic site.