Around the house you only need two items for carrying out necessary repairs. These are, a can of WD-40, and a roll of duct tape. Confused? OK, its like this …

Ah, but does this model scale up? What if you are not at home, but instead are at work at say … Fermilab, and just happen to encounter an issue with the Tevatron particle accelerator, what then? Remember now, this is a complex multi-billion dollar machine that is about four miles in circumference and involves about a thousand superconducting magnets, which accelerate protons and antiprotons to super-sized energies. Also, these are not common magnets, they are cooled with liquid helium so that they consume only one-third of the power they would normally require. If you hit an issue, do you shut down for a week, and call in a team of specialists at considerable cost to pull it apart for repair, or do you instead get out your roll of duct tape and patch it up so that you can carry on with no outage?

And the answer is …

… you go for the duct tape. 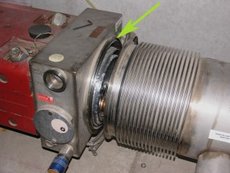 Placing a new O-ring around the beamline would have required at least a 10-day shutdown to warm up the Tevatron from about minus 500°F, to disassemble the tube, replace the ring, to complete a full mechanical and vacuum certification of the entire section and to cool it back down. This would have been frustrating for the Tevatron’s scientists, who had just ended a scheduled four-week shutdown and were anxious to get back to their experiments.

“This big machine is four miles in circumference, with a thousand-some superconducting magnets, and one piece of rubber is gonna stop us?” he said. “I don’t think so. Not if we can help it.”

Four years ago, McCormick and senior operations specialist Dave Augustine had done an experiment testing this exact scenario. During a scheduled shutdown, they removed the clamp from a similar juncture and wrapped the interface in electrical tape. The resulting vacuum held for more than a year. In a real emergency, this would buy them more than enough time until a permanent repair could be made.

So, after much discussion and safety optimization, they decided to try it on the actual leak during the holiday weekend. Four leak detectors, six vacuum pumps, five technicians, one roll of 5/8-inch black electrical tape and a day and a half later, the Tevatron was up and running without a hitch.

Being smart does not necessarily imply complexity, sometimes very simple answers can be quite profound.

You can read more about this here …