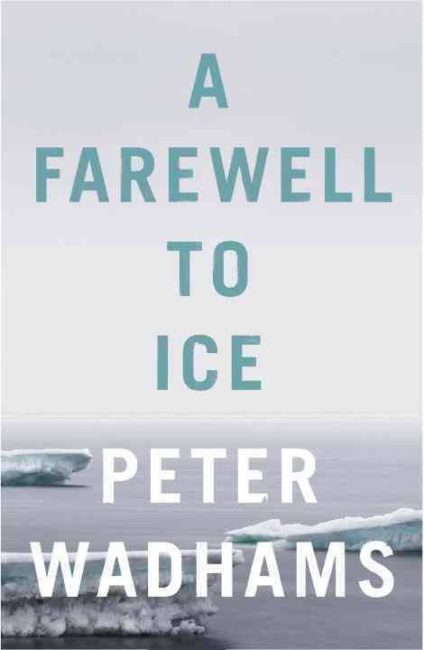 Peter Wadhams, perhaps one of the world authorities on sea ice, has a new book that might be of interest. It is quite rightly called “A Farewell to Ice“.

Well OK, not quite published yet, because publication date is 1st Sep in the UK (alas US folks, it is not out there until next Feb, but hey you can still grab a copy from the UK Amazon).

The text is not a dry academic facts and figures monologue, but is instead laced with autobiographical details.

OK, quick side note – I have no financial interest in promoting this, instead I think this is simply an important book to consider.

The UK’s Guardian has a review …

A Farewell to Ice proceeds methodically. Ice cores, tubes of compacted polar snow, record the last million years of atmospheric change, during which the Earth has oscillated between ice ages and warm periods. Now the pattern is breaking.

“Our planet has changed colour. Today, from space, the top of the world in the northern summer looks blue instead of white. We have created an ocean where there was once an ice sheet. It is Man’s first major achievement in reshaping the face of his planet,” Wadhams writes.

Polar ice is thinning and retreating with unprecedented speed. All our ingenuity cannot, at present, change that. Because ice only grows in winter but can melt year-round, its growth rate is limited, while melt rate is unlimited.

Ice is extraordinary stuff. A “puckered honeycomb” of oxygen and hydrogen atoms, it is highly mutable in different states because the length of the hydrogen bonds in its molecules varies. Ice exists near absolute zero, the lowest temperature theoretically possible. Recent research suggests it may have entirely covered the Earth three times, making “snowball Earths”. Ice coats space dust, giving stars their twinkle. Life may have originated in that shining dust, according to the astronomer Fred Hoyle. Polar ice functions as Earth’s air- and water-conditioning system, and our thermostat.

Wadhams outlines how CO2 emissions are smashing the system, spinning the thermostat to hot. Without the albedo effect of ice – by which it reflects solar radiation up to 10 times more effectively than open water – we have entered a negative feedback loop.

Wadhams puts this plainly. “There is no period in Earth’s history where the rate of rise of atmospheric CO2 is as great as it is today.” The asteroid that finished the dinosaurs blasted 4.5 gigatonnes of carbon into the atmosphere, “yet the CO2 rate rise [in the aftermath] was still an order of magnitude lower than the current rate”.

There is also An interview

He answers questions, and some of those answers are very uncomfortable …

You have said on several occasions that summer Arctic sea ice would disappear by the middle of this decade. It hasn’t. Are you being alarmist?
No. There is a clear trend down to zero for summer cover. However, each year chance events can give a boost to ice cover or take some away. The overall trend is a very strong downward one, however. Most people expect this year will see a record low in the Arctic’s summer sea-ice cover. Next year or the year after that, I think it will be free of ice in summer and by that I mean the central Arctic will be ice-free. You will be able to cross over the north pole by ship. There will still be about a million square kilometres of ice in the Arctic in summer but it will be packed into various nooks and crannies along the Northwest Passage and along bits of the Canadian coastline. Ice-free means the central basin of the Arctic will be ice-free and I think that that is going to happen in summer 2017 or 2018.

Why should we be concerned about an Arctic that is free of ice in summer?
People tend to think of an ice-free Arctic in summer in terms of it merely being a symbol of global change. Things happen, they say. In fact, the impact will be profound and will effect the whole planet and its population. One key effect will be albedo feedback. Sea ice reflects about 50% of the solar radiation it receives back into space. By contrast, water reflects less than 10%. So if you replace ice with water, which is darker, much more solar heat will be absorbed by the ocean and the planet will heat up even more rapidly than it is doing at present.

Sea ice also acts as an air-conditioning system. Winds coming over the sea to land masses such as Siberia and Greenland will no longer be cooled as they pass over ice and these places will be heated even further. These effects could add 50% to the impact of global warming that is produced by rising carbon emissions.

You might not buy the book, but the Interview with him is there online, and is free. I recommend investing a few minutes reading that.

1 thought on “A Farewell to Ice”