Fiona Harvey writes in the Guardian the following story …

She is not alone. Andrew Griffin is writing a similar story in the Independent …

What is driving these media stories?

The Arctic Council, a high-level intergovernmental forum that addresses issues faced by the Arctic governments and the indigenous people of the Arctic, has just issued an Arctic Resilience Report. 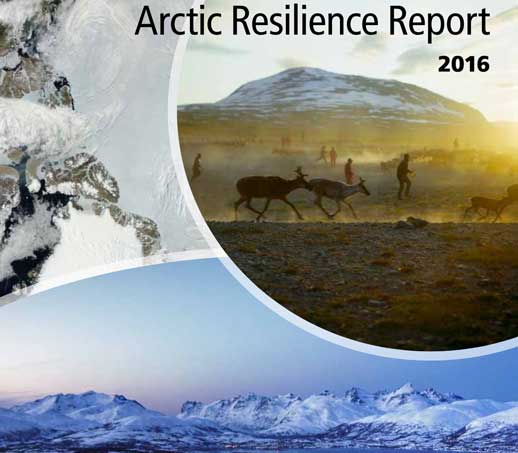 The report is the concluding scientific product of the Arctic Resilience Assessment, a project that was launched by the Arctic Council.

OK, so who exactly has their finger in the pie here?

Basically these organisations do …

If you take nothing else away from any of this, this digest this, because it is the core of the report …

Change – even rapid change – is the norm in the Arctic. But environmental, ecological and social changes are happening faster than ever, and accelerating. They are also more extreme, well beyond what has been seen before. And while some changes, such as warming temperatures, are gradual, others, such as the collapse of ice sheets, have the potential to be not only abrupt, but also irreversible. This means the integrity of Arctic ecosystems is increasingly challenged, with major implications for Arctic communities and for the world as a whole.

Well yes, but what about those scary headlines?

It is all sourced from Chapter 3 of the report. There they examine 19 documented or potential regime shifts in the Arctic – from a shift to sea-ice-free summers, to collapse of different Arctic fisheries, to the transformation of landscapes: from bogs to peat-lands, or from tundra to boreal forest or to steppe. These regime shifts are having large impacts on the availability of wildlife, the stability of the climate, and Arctic people’s sense of place and well-being.

Words such as “havoc” and “catastrophic”  when embedded within such phrases and presented like that, might indeed strike you are terms that are a tad emotive, so you might wonder if they accurately describe what the report is actually telling us. Yes, they do feel more akin to a Disaster Movie promotion tag line, but the contents of the report does wholly justify them, because that is exactly what it really is laying out in detail.

Ecological change threatens the integrity and sustainability of these Arctic communities and ecosystems. This section explains how this is now happening.

The key section of interest is section 3.5, the one that perhaps attracted such headlines. This where they lay out the “Impacts of Arctic regime shifts outside the Arctic” …

Most regime shifts in the Arctic are believed to amplify climate change (Figure 3.4b), which in turn will increase the likelihood of climate-driven regime shifts worldwide. As noted above, the combination of changes in sea ice, permafrost and vegetation are likely to have difficult-to-predict impacts on regional and even global climates. It is likely that these combined impacts will result in a less predictable, more variable and more surprising Arctic and global climate. is will affect people within the Arctic and may also trigger further impacts outside the Arctic (Figure 3.7, p.90), such as tropical forests turning to savannahs, monsoon systems weakening, mangroves collapsing, coral reefs becoming dominated by algae, and the West Antarctica ice sheet collapsing (IPCC 2014).

Scientists know that there are cross-scale connections, where local and regional regime shifts interact, For example, the loss of sea ice can influence the climate, increasing the likelihood of other terrestrial regime shifts. There are also horizontal connections, where a regime shift in one ecosystem can trigger a shift in a connected ecosystem, such as when freshwater eutrophication triggers coastal hypoxia downstream. Identifying the processes that connect different regime shifts and mediate the strength of these connections is vital for understanding the ability of ecosystems to respond to global changes such as climate change and increased habitat conversion.

Note the underlined terms … and that perhaps is key. It is highly probable that an arctic shift will potentially cascade into other changes in other places on the planet, but we simply do not know, nor can we predict with a hight degree of certainty what comes next.

What we do know is that what we now observe within the Arctic is rapid, sudden and is to some degree a surprise.

Bottom Line: Note the underlined words in bold from the stories …

They essentially get that right. In other words, what actually will happen is not really known, these are simply possibilities and not probabilities.

However what should cause us a considerable degree of worry is the observation that what is now happening in the arctic is far more acute and rapid than anything predicted by any of the climate models. The models may in reality have been too optimistic, and that truly is the scary part here.