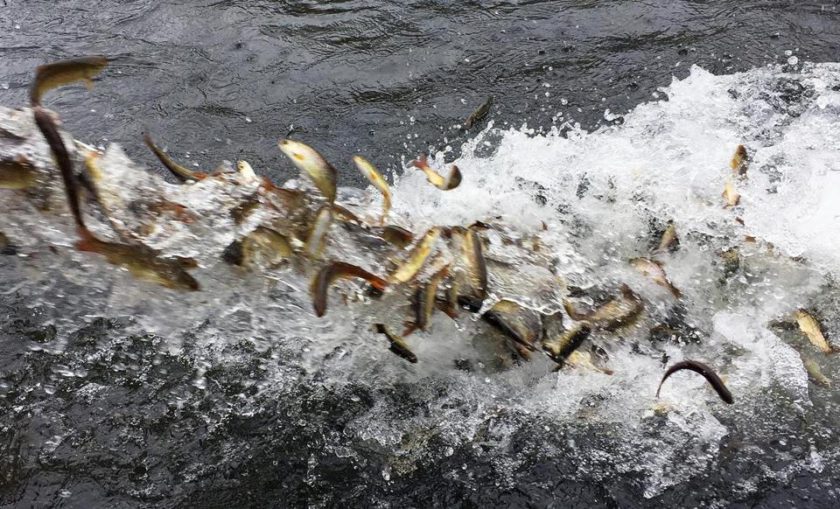 There is a new study that highlights yet another climate change impact.

It is of course true that many stocks are overfished and poorly managed, however the newly published study, “Impacts of historical warming on marine fisheries production“, has brought to light yet another factor – climate change.

What this study brings to the table is the revelation that warming has led to an estimated 4.1 percent drop in sustainable catches, on average, for many species of fish and shellfish from 1930 to 2010. That was average, some is a lot worse. In five regions of the world, including the East China Sea and North Sea, the estimated decline was 15 percent to 35 percent. That is quite frankly a shocking amount of decline.

Below you can see in circles the percentage of decline in the maximum sustainable yield (MSY). The size of the circle is a unit that graphically represents the number of metric tons.

There you can see the 5 specific regions where there was a sharp decline, and also in blue the areas where there has been an increase. Yes, some fish liked it getting warmer and so responded positively, but as it keeps getting even warmer those yields will also start to decline (more on this in a moment).

Let’s briefly dive further in and take a closer look.

Published in Science on 1st March, it highlights the degree to which climate change will add to the burden faced by fish stocks.

They studied the impact of ocean warming on 235 populations of 124 species in 38 ecological regions around the world. Species included fish, crustaceans such as shrimp, and mollusks such as sea scallops.

This involved combining global data on fisheries with ocean temperature maps to estimate temperature-driven changes in the sustainable catch (known as the maximum sustainable yield) [MSY] from 1930 to 2010. Their analysis covered about one third of the reported global catch

Was it all doom and Gloom?

Actually no, some did respond positively. Overall there were winners and also losers. The greatest losses were in the Sea of Japan, North Sea, Iberian Coastal, Kuroshio Current and Celtic-Biscay Shelf regions. The greatest gains occurred in the Labrador-Newfoundland, Baltic Sea, Indian Ocean and Northeast U.S. Shelf regions …

the aerobic performance of individual fish is dome shaped, it increases as temperatures warm toward some thermal optimum but decreases once temperatures exceed this optimum … Populations identified as responding positively to warming are thus unlikely to maintain productivity gains as continued warming drives these populations past their thermal optima

…the maximum sustainable yield of the evaluated populations decreased by 4.1% from 1930 to 2010, with five ecoregions experiencing losses of 15 to 35%.

How does this new insight help?

Outcomes of fisheries management—including long-term food provisioning—will be improved by accounting for changing productivity in a warmer ocean.

…prompt improvements in fisheries management could maintain fisheries yields and profits into the future. Thus, preventing overfishing and developing management strategies that are robust to temperature-driven changes in productivity are essential if society is to maintain and re- build the capacity for global wild-capture fisheries to supply food and support livelihoods in a warming ocean.

Is this the whole story?

Not really, as is often the case, it gets complicated. The study has a few constraints.

None of the above is intended to suggest that this is not a good study – it actually is. In fact, the researchers do address the above constraints using best practise, and so while there is some uncertainty, it still remains a valuable insight.

What is also worth noting is that their analytical constraints imply that the impacts of ocean warming on fisheries productivity may actually be far more negative than they could detect.

Chris Free, who led the research while earning a doctorate at Rutgers and is now a postdoctoral scientist at the University of California, Santa Barbara …

“We recommend that fisheries managers eliminate overfishing, rebuild fisheries and account for climate change in fisheries management decisions, Policymakers can prepare for regional disparities in fish catches by establishing trade agreements and partnerships to share seafood between winning and losing regions.”

“We were stunned to find that fisheries around the world have already responded to ocean warming, These aren’t hypothetical changes sometime in the future.”

“Fish populations can only tolerate so much warming, though,Many of the species that have benefited from warming so far are likely to start declining as temperatures continue to rise.”